Trypophloeus klimeschi Eggers (Coleoptera: Curculionidae: Scolytinae) causes substantial mortality to Populus alba var. pyramidalis individuals in Xinjiang, China. Currently, the number of host trees killed by this bark beetle is increasing. Climate change has exacerbated this problem, causing its range to expand. Here, using Maxent, we simulated its distributions in the 2030s and 2050s under representative concentration pathways (RCPs) 2.6, 4.5 and 8.5. The distribution expanded the most under RCP 8.5. It is large enough to pose substantial challenges for forest managers across northern China. Our study contributes to the construction and protection of shelter forests in Northern China because we present novel evidence of the potential impacts of climate change on forestry.

Temperature and precipitation are the two main factors constraining the current distribution of Trypophloeus klimeschi. Currently, T. klimeschi is mainly distributed in South Xinjiang, where it occurs between the southern edge of the Tianshan Mountains and northern edge of the Tarim Basin. In addition, Dunhuang in northern Gansu also provide suitable habitats for this bark beetle. Two other potential areas for this species are in or near the cities of Alaer and Korla. Under future climate scenarios, its total suitable area is projected to increase markedly over time. Among the climate scenarios, the distribution expanded the most under the maximum greenhouse gas emission scenario (representative concentration pathway (RCP) 8.5). Jiuquan in Gansu is projected to become a suitable area in the 2030s. Subsequently, T. klimeschi is expected to enter western Inner Mongolia along the Hexi Corridor in the 2050s. In southeastern Xinjiang, however, the suitable area in northern Ruoqiang and most areas of Korla may decrease. By the 2050s, it is large enough to pose substantial challenges for forest managers across northern China. Our findings provide information that can be used to monitor T. klimeschi populations, host health, and the impact of climate change, shedding light on the effectiveness of management responses. View Full-Text
Keywords: Trypophloeus klimeschi; climate change; species distribution models; insect–climate interactions; pest management Trypophloeus klimeschi; climate change; species distribution models; insect–climate interactions; pest management
►▼ Show Figures 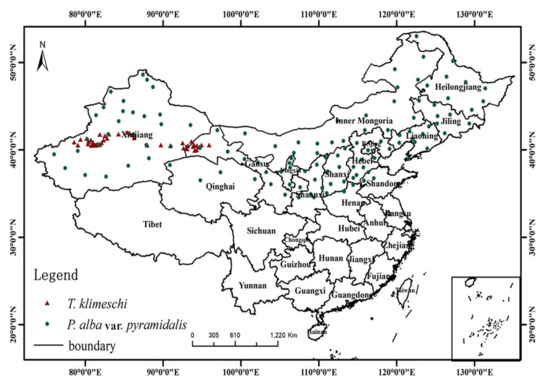