Population Dynamics of Aedes aegypti and Aedes albopictus in Two Rural Villages in Southern Mexico: Baseline Data for an Evaluation of the Sterile Insect Technique
Next Article in Special Issue

Supporting Bees in Cities: How Bees Are Influenced by Local and Landscape Features
Previous Article in Journal

Use of a Managed Solitary Bee to Pollinate Almonds: Population Sustainability and Increased Fruit Set

Methods to rear Osmia bees to pollinate fruit trees have been developed in various parts of the world. These bees are excellent pollinators but evidence that their populations can be sustained in orchards and their use results in increased fruit production is scarce. We released an Osmia cornuta population at one end of an almond orchard. Then, we surveyed the pollinators visiting the almond flowers and measured fruit set in trees located at increasing distances from the nesting stations. We found that fruit production was higher in the trees that received more Osmia visits. Importantly, this result was obtained against a strong background of honeybees, which were 10 times more abundant than Osmia. The Osmia population obtained at the end of the flowering period was 1.28 larger than the population initially released. Our study demonstrates that Osmia populations can be sustained in orchard environments and that even a small population of a highly effective pollinator may have a significant impact on fruit set. Our results are encouraging for the use of Osmia populations and for the implementation of measures to promote wild pollinators in agricultural environments.

Osmia spp. are excellent orchard pollinators but evidence that their populations can be sustained in orchard environments and their use results in increased fruit production is scarce. We released an Osmia cornuta population in an almond orchard and measured its population dynamics, as well as visitation rates and fruit set at increasing distances from the nesting stations. Honeybees were 10 times more abundant than O. cornuta. However, the best models relating fruit set and bee visitation included only O. cornuta visitation, which explained 41% and 40% of the initial and final fruit set. Distance from the nesting stations explained 27.7% and 22.1% of the variability in initial and final fruit set. Of the 198 females released, 99 (54.4%) established and produced an average of 9.15 cells. Female population growth was 1.28. By comparing our results with those of previous O. cornuta studies we identify two important populational bottlenecks (female establishment and male-biased progeny sex ratios). Our study demonstrates that even a small population of a highly effective pollinator may have a significant impact on fruit set. Our results are encouraging for the use of Osmia managed populations and for the implementation of measures to promote wild pollinators in agricultural environments. View Full-Text
Keywords: pollination service; Osmia cornuta; Apis mellifera; population dynamics; managed pollinators; crop pollination pollination service; Osmia cornuta; Apis mellifera; population dynamics; managed pollinators; crop pollination
►▼ Show Figures 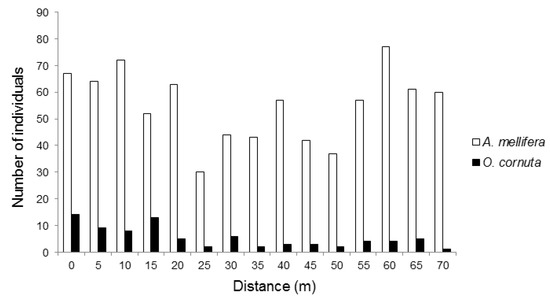