Large-Scale Monitoring of Resistance to Coumaphos, Amitraz, and Pyrethroids in Varroa destructor
Next Article in Special Issue

Is Orius sauteri Poppius a Promising Biological Control Agent for Walnut Aphids? An Assessment from the Laboratory to Field

The discovery of Comperiella calauanica a parasitoid confirmed to be the major natural enemy of the invasive diaspidid, Aspidiotus rigidus, has led to the promise of biological control in sustainable pest management of this devastating coconut pest. In this study, we employed Maximum Entropy (Maxent) to develop a bioclimate-based species distribution model (SDM) for the parasitoid from presence-only data recorded from field surveys conducted in select points the Philippines. Results of assessment of the generated model point to its excellent power in predicting either suitability of habitat, or potential occurrence or distribution of C. calauanica. Since the parasitoid is highly host-specific, the model may also apply to A. rigidus. Field surveys in select areas in the Philippines confirmed the occurrence of the invasive coconut scale in areas predicted by the model as having considerable probability of occurrence, or habitat suitability. Our findings strongly suggest the potential utility of Maxent SDMs as tools for pest invasion forecasting and GIS-aided surveillance for integrated pest management (IPM).

Comperiella calauanica is a host-specific endoparasitoid and effective biological control agent of the diaspidid Aspidiotus rigidus, whose outbreak from 2010 to 2015 severely threatened the coconut industry in the Philippines. Using the maximum entropy (Maxent) algorithm, we developed a species distribution model (SDM) for C. calauanica based on 19 bioclimatic variables, using occurrence data obtained mostly from field surveys conducted in A. rigidus-infested areas in Luzon Island from 2014 to 2016. The calculated the area under the ROC curve (AUC) values for the model were very high (0.966, standard deviation = 0.005), indicating the model’s high predictive power. Precipitation seasonality was found to have the highest relative contribution to model development. Response curves produced by Maxent suggested the positive influence of mean temperature of the driest quarter, and negative influence of precipitation of the driest and coldest quarters on habitat suitability. Given that C. calauanica has been found to always occur with A. rigidus in Luzon Island due to high host-specificity, the SDM for the parasitoid may also be considered and used as a predictive model for its host. This was confirmed through field surveys conducted between late 2016 and early 2018, which found and confirmed the occurrence of A. rigidus in three areas predicted by the SDM to have moderate to high habitat suitability or probability of occurrence of C. calauanica: Zamboanga City in Mindanao; Isabela City in Basilan Island; and Tablas Island in Romblon. This validation in the field demonstrated the utility of the bioclimate-based SDM for C. calauanica in predicting habitat suitability or probability of occurrence of A. rigidus in the Philippines. View Full-Text
Keywords: Aspidiotus rigidus; Comperiella calauanica; Maxent; pest invasion forecasting; species distribution modeling Aspidiotus rigidus; Comperiella calauanica; Maxent; pest invasion forecasting; species distribution modeling
►▼ Show Figures 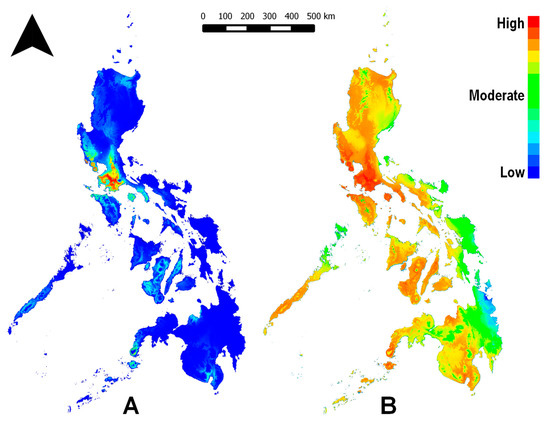