Insecticidal Effect of Entomopathogenic Nematodes and the Cell-Free Supernatant from Their Symbiotic Bacteria against Philaenus spumarius (Hemiptera: Aphrophoridae) Nymphs
Previous Article in Journal

Process of Attack on Cashew Tree Branches by Diastocera trifasciata (Coleoptera: Cerambycidae) and the Relationship between These Attacks and the Phenological Stages in the Gbêkê Region (Central Côte d’Ivoire)

Entomopathogenic nematodes (EPNs) are lethal parasites of insects that have become valuable in biological control and as a model system for studying host–parasite interactions, behavioral ecology, neurobiology, and genomics, among other fields. Their ability to locate hosts is paramount to successful infection and host seeking has been extensively studied in many species in the lab. Here, we explored the usefulness of pluronic gel as a medium to assess EPN host seeking in the lab by characterizing the response of Steinernema carpocapsae, S. feltiae, S. glaseri, S. riobrave, Heterorhabditis bacteriophora, and H. indica to the odor prenol. We found that the infective juveniles (IJs) of these species were repelled by prenol in pluronic gel. We then evaluated how storing the IJs of S. carpocapsae, S. feltiae, and S. glaseri for different amounts of time affected their behavioral responses to prenol. The response of S. carpocapsae was significantly affected by the storage time, while the responses of S. feltiae and S. glaseri were unaffected. Our data support the notion that pluronic gel is a useful medium for studying EPN behavior and that the response of S. carpocapsae to informative odors is significantly affected by long-term storage. View Full-Text
Keywords: entomopathogenic nematodes; PF127; pluronic gel; chemotaxis entomopathogenic nematodes; PF127; pluronic gel; chemotaxis
►▼ Show Figures 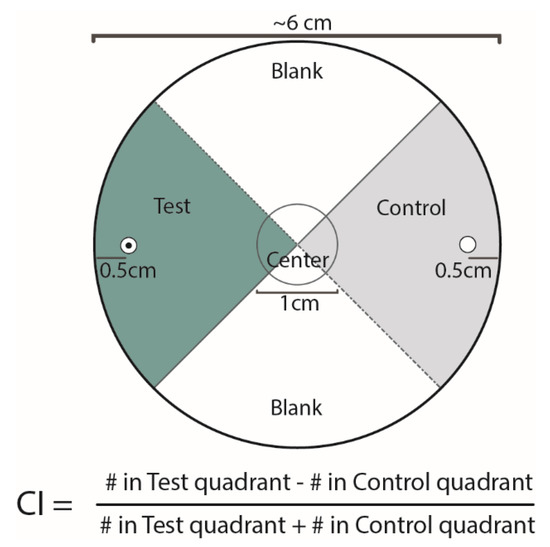