The susceptible strain (SS) and the resistant strain (metaflu-SEL) have been described (published previously) [14]. The population of metaflu-SEL larvae were used to investigate cross-resistance, synergistic effects, stability of resistance, and enzyme activity (according to the number of larvae). The resistance decaying strain (UNSEL), a revertant strain, was derived from a substrain of metaflu-SEL that had not been exposed to metaflumizone or any other insecticide for 12 consecutive generations. The larvae were reared on vermiculite-grown radish (Raphanus sativus L.) seedlings, and the adults were provided with a 10% honey/water solution in the laboratory under controlled conditions of 25 ± 1 °C, 65 ± 5% RH and a 16:8 h L:D photoperiod in a separate greenhouse.

The leaf-dipping bioassay was used to determine the susceptibility of the third instar larvae of P. xylostella to insecticides (According to “Guideline for insecticide resistance monitoring of Plutella xylostella (L.) on cruciferous vegetables) [15,16]. The insecticide was diluted to generate five to seven serial dilutions with water containing 0.1% Triton X-100 to facilitate a uniform leaf disc coverage with the active ingredient. Cabbage leaf discs (7.0 cm diameter) were cut and dipped in an insecticide solution for 10 s. Control discs were treated with a 0.1% Triton X-100 solution in water. The leaf discs were dried at room temperature for 2 h. Each treated leaf disc with 15 third instar larvae was placed in a separate plastic Petri dish and kept at 25 ± 1 °C with an RH of 60 ± 5% and a 16:8 h L:D photoperiod. For each insecticide concentration, three replicates of larvae were used. The mortality was assessed after 48 h expose to indoxacarb, spinosad, spinetoram, abamectin, beta-cypermethrin, chlorfenapyr, diafenthiuron, and chlorantraniliprole, as well as 72 h expose to BT (WG-001), chlorfluazuron, and metaflumizone. Larvae were considered dead if they could not move when touched with a fine brush. The control mortality was less than 5% in all bioassays.
To analyze the synergistic effects of enzyme inhibitors with metaflumizone, a total of 200 mg/L of PBO, DEM, and TPP which did not result in larval mortality were added to separate aliquots of each dilution. Bioassays were conducted again for the metaflu-SEL and SS populations at the 27th generation (G27, RR = 1338.99-fold) with and without synergists. To assess the degree of synergism, the synergistic ratio (SR) was calculated by dividing the LC50 value of metaflumizone alone by the LC50 value of metaflumizone with the synergist treatments.

Carboxylesterase (CarE) activity was determined using the method of Asperen (1962) with modification [17]. Ten fourth instar larvae of P. xylostella were homogenized in 1 mL of ice sodium phosphate buffer (0.04 M, pH 7.0) and centrifuged at 4 °C, 11,000 rpm for 15 min. The homogenized supernatant was then carefully transported to a new Eppendorf tube and was used as the enzyme source. Total of 1.8 mL of substrate solution (containing 3 × 10−4 M α-NA and 3 × 10−4 eserine), 450 μL of sodium phosphate buffer (0.04 M, pH 7.0), and 50 μL of diluted supernatant (diluted 10-fold) were added to the Eppendorf tube and incubated at 30 °C for 15 min. The reaction was stopped with the addition of 900 μL of dye reagent (1% fast blue B salt: 5% SDS = 2:5 V/V). The optical density (OD) was recorded at 600 nm using an ultraviolet spectrophotometer (SHIMADZU UV-1800).
Glutathione S-transferase activity was determined as previously described by Habig [18]. The enzyme solution was prepared with ten fourth instar of P. xylostella frozen larvae (−80 °C) homogenized in sodium phosphate buffer (0.1 M, pH 6.5) and centrifuged at 1000 r/min for 10 min at 4 °C. The supernatant was collected as the crude enzyme solution. For each reaction, 810 μL of sodium phosphate buffer (0.1 M, pH 6.5), 30 μL of 30 mM 1-chloro-2,4-dinitrobenzene (CDNB), 50 µL of enzyme solution, 30 μL of 30 mM GSH were mixed. The absorbance was recorded using a NP80 NanoPhotometer (IMPLEN, Munich, Germany) at 340 nm for 2 min. The crude enzyme was diluted 40 times for the protein concentration determination.
The 7-ethoxycoumarin-O-deethylase (7-ECOD) activity of P450 was determined as described previously [19] with modification. Ten fourth instar larvae were homogenized in 1.0 mL of sodium phosphate buffer (0.1 M sodium phosphate buffer, pH 7.5, containing 1 mM EDTA, 1 mM PMSF 1 mM DTT, and 10% glycerol) and then centrifuged at 4 °C 14,000 rpm for 15 min. The supernatant was added to a new Eppendorf tube and centrifuged at 4 °C 14,000 rpm for 30 min again. The supernatant was then used as the enzyme source. For the reaction, 685 μL of Tris-HCl buffer (0.1 M, pH 7.8), 20 μL of aqueous NADPH (10 mM) and 25 μL of 7-ECOD (2 mM, dissolved with absolute ethanol), and 250 μL of crude homogenate were mixed. After incubation at 30 °C for 15 min, 300 μL of 15% trichloroacetic acid was added to terminate the reaction. Then, the mixture was centrifuged, and 800 μL of the supernatant was extracted. The pH of the resulting extract was adjusted to approximately 10 by adding 400 μL of 1.6 mM glycine-NaOH buffer (pH 10.5). The fluorescent intensity was measured using a Spark 10 M Multimode Microplate Reader (Tecan, Männedorf, Switzerland) with an excitation wavelength of 358 nm and an emission wavelength of 465 nm. The P450 activity was calculated from a 7-hydroxycoumarin standard curve.

To determine the susceptibilities of the UNSEL and metaflu-SEL strains to other insecticides (including indoxacarb, spinosad, spinetoram, abamectin, beta-cypermethrin, diafenthiuron, chlorantraniliprole, BT (WG-001), chlorfenapyr, chlorfluazuron), the metaflu-SEL population was treated with the insecticides for up to G22 (RR = 953.98-fold) or G23 (RR = 942.78-fold) and the data were compared with the susceptible strain. Cross-resistance was determined by calculating the cross-resistance ratio (CR). The CR value was estimated as: CR = LC50 of metaflu-SEL strain / LC50 of UNSEL strain.

To investigate the stability of resistance to metaflumizone, the UNSEL strain was reared for 12 generations (G28-G40) without insecticide exposure. The reduction in the resistance (DR) to insecticides of the UNSEL strain was estimated by calculating the R value using the following formula [20]: where n is the number of generations without selection. Negative values of R reflect decreases in the LC50. The inverse of R is the number of generations required for a ten-fold change in the LC50.

Bioassay data, including the LC50 values and the 95% confidence limits (CL), were calculated using probit regressions in the Probit-MS computer program [21]. Enzyme data were analyzed with Tukey’s test with a significance level of p < 0.05 using the IBM SPSS Statistical [22].

3.1. Synergism of PBO, DEF, and DEM with Metaflumizone

3.2. Activity of the Detoxification Enzymes in Susceptible and Metaflu-SEL Strains of P. xylostella

To determine the role of detoxification enzymes in metaflumizone resistance in the P. xylostella, enzyme assays were performed to measure the levels of CarE, GST, and P450 (Figure 1). No significant differences in the activities of CarE and GST were found between the susceptible and metaflu-SEL strains. The activity of the P450 increased only 1.13-fold in the metaflu-SEL strain compared with the SS, which suggests that P450 had a very limited effect on metaflumizone resistance in P. xylostella.

3.3. Cross-Resistance of Metaflumizone to Different Conventional and New Chemical Insecticides

The metaflu-SEL strain and the SS were tested for cross resistance to other insecticides, including indoxacarb, spinosad, spinetoram, abamectin, beta-cypermethrin, chlorfenapyr, diafenthiuron, chlorantraniliprole, BT (WG-001), and chlorfluazuron (Table 2). The metaflu-SEL strain showed medium cross-resistance to indoxacarb (RR = 11.63-fold); however, there was no sign of cross-resistance to the other tested insecticides, including spinosad (1.75-fold), spinetoram (3.52-fold), abamectin (2.81-fold), chlorantraniliprole (2.16-fold) and BT (WG-001) (3.34-fold), beta- cypermethrin (0.71-fold), chlorfenapyr (0.49-fold), diafenthiuron (0.79-fold), and chlorfluazuron (0.97-fold).

J.S., Z.L., and J.L. designed the experiment; Z.L., D.L., and R.W. collected data; J.S. and Z.L. analyzed the data and wrote the manuscript, J.S., S.Z., H.Y., and J.L. read, corrected, and approved the manuscript. All authors have read and agreed to the published version of the manuscript.

This research was supported by the National Natural Science Foundation of China (31672048) and the National Key Research and Development Program of China (2016YFD0200500). 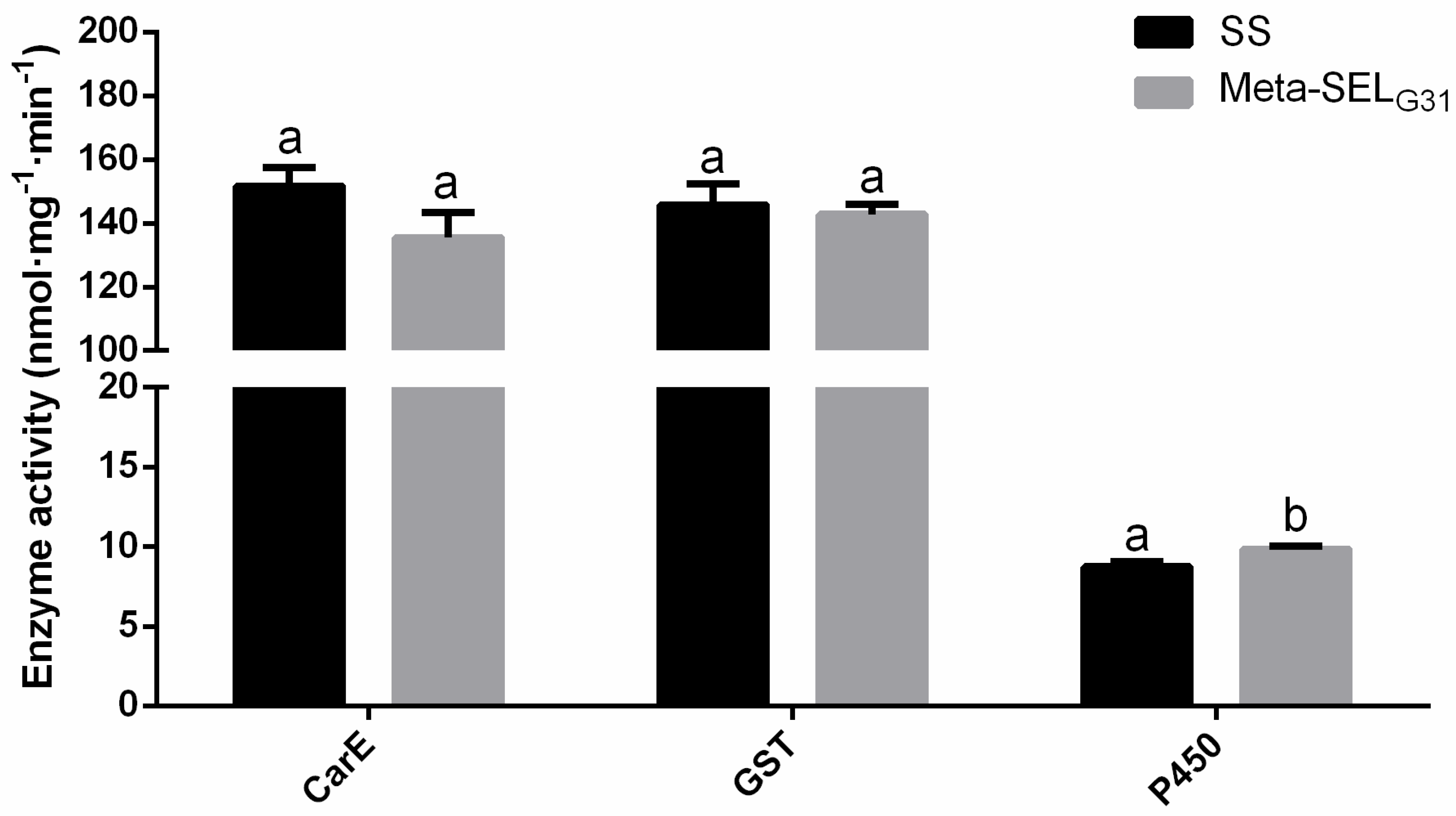