In freshwater ecosystems, habitat heterogeneity supports high invertebrate density and diversity, and it contributes to the introduction and settlement of non-native species. In the present study, we identified the habitat preferences and trophic level of Brachydiplax chalybea flavovittata larvae, which were distributed in four of the 17 wetlands we examined in the Yeongsan River basin, South Korea. Larval density varied across four microhabitat types: open water area, and microhabitats dominated by Myriophyllum aquaticum, Paspalum distichum, and Zizania latifolia. Microhabitats dominated by M. aquaticum had the highest larval density, followed by those dominated by P. distichum. The larvae were more prevalent in silt sediments than in plant debris or sand. Stable isotope analysis showed that B. chalybea flavovittata is likely to consume, as a food source, other species of Odonata larvae. We conclude that successful settlement of B. chalybea flavovittata can be attributed to their habitat preferences. As temperature increases due to climate change, the likelihood of B. chalybea flavovittata spreading throughout South Korea increases. We, therefore, recommend continued monitoring of the spread and ecological impacts of B. chalybea flavovittata. View Full-Text
Keywords: atmospheric temperature; distribution and diffusion; habitat heterogeneity; macrophytes; Odonata larvae; stable isotope analysis atmospheric temperature; distribution and diffusion; habitat heterogeneity; macrophytes; Odonata larvae; stable isotope analysis
►▼ Show Figures 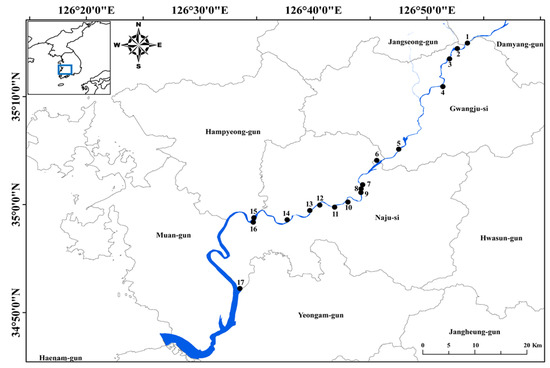