Assessment of Lethal, Sublethal, and Transgenerational Effects of Beauveria bassiana on the Demography of Aedes albopictus (Culicidae: Diptera)

Dengue fever is one of the most rapidly spreading arthropod-borne diseases. Diurnal vectorial properties of Aedes albopictus contribute to the dispersion of the dengue viruses. Frequent and injudicious use of synthetic insecticides led to the evolution of resistant phenotypes in Ae. albopictus which necessitates the search for an alternative of current control strategies. Developing a long-lasting and environmentally safe tactic based on knowledge of ecology and population dynamics of Ae. albopictus is critical. Therefore, with a view towards biological control and ecology, the effect of entomopathogenic fungi (EPF) Beauveria bassiana on filial and first filial generations of Ae. albopictus were studied. Investigations showed 87.5% adulticidal activity leading to altered fecundity and adult longevity in a filial generation. The lethal (LC50) and sublethal (LC20) concentrations of B. bassiana were applied to filial generation (F0) to study demographic parameters in the first filial generation (F1). Results showed reduced net reproductive rates (Ro) intrinsic rate of increase (r), and mean generation time (T) compared to uninfected controls. Prolonged larval and pupal duration were observed followed by reduced longevity of male and female adults. Fecundity in the first filial generation was significantly changed with the lethal and sublethal concentrations of B. bassiana. Thus, it is concluded that B. bassiana has the potential to play a vital role in integrated mosquito management strategies. View Full-Text
Keywords: Asian tiger; mosquito; demography; entomopathogenic fungi; Beauveria bassiana Asian tiger; mosquito; demography; entomopathogenic fungi; Beauveria bassiana
►▼ Show Figures 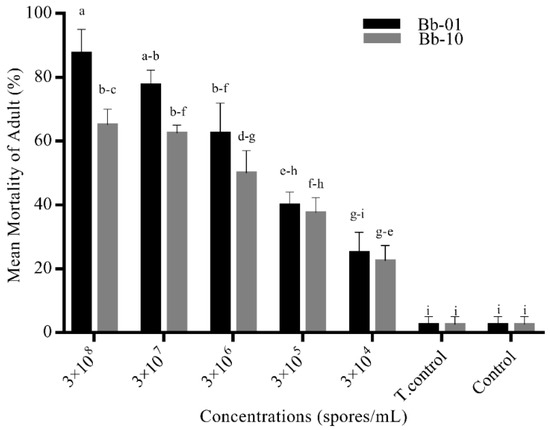