First Report of Aleurocanthus spiniferus on Ailanthus altissima: Profiling of the Insect Microbiome and MicroRNAs

We report the first occurrence of the orange spiny whitefly (Aleurocanthus spiniferus; OSW) on the tree of heaven (Ailanthus altissima) in Bari, Apulia region, Italy. After our first observation in 2016, the infestation recurred regularly during the following years and expanded to the neighboring trees. Since then, we have also found the insect on numerous patches of the tree of heaven and other plant species in the Bari province. Nevertheless, the tree of heaven was not particularly threatened by the insect, so that a possible contribution by OSW for the control of such an invasive plant cannot be hypothesized hitherto. This work was also aimed at profiling the microbiome of OSW feeding on A. altissima. For this purpose, we used the denaturing gradient gel electrophoresis (DGGE) and the deep sequencing of small RNAs (sRNAs). Both techniques unveiled the presence of “Candidatus Portiera” (primary endosymbiont), Wolbachia sp. and Rickettsia sp., endosymbionts already reported for other Aleyrodidae. Deep sequencing data were analyzed by four computational pipelines in order to understand the reliability of the detection of fungi, bacteria, and viruses: Kraken, Kaiju, Velvet, and VelvetOptimiser. Some contigs assembled by Velvet or VelvetOptimiser were associated with insects, but not necessarily in the Aleurocanthus genus or Aleyrodidae family, suggesting the non-specificity of sRNAs or possible traces of parasitoids in the sample (e.g., Eretmocerus sp.). Finally, deep sequencing data were used to describe the microtranscriptome of OSW: 56 canonical and at least four high-confidence novel microRNAs (miRNAs) were identified. The overall miRNA abundance in OSW was in agreement with previous works on Bemisia tabaci, and bantam-3p, miR-276a-3p, miR-317-3p, miR-750-3p, and mir-8-3p were the most represented miRNAs. View Full-Text
Keywords: spiny blackfly; orange spiny whitefly; tree of heaven; alien, invasive or quarantine pest spiny blackfly; orange spiny whitefly; tree of heaven; alien, invasive or quarantine pest
►▼ Show Figures 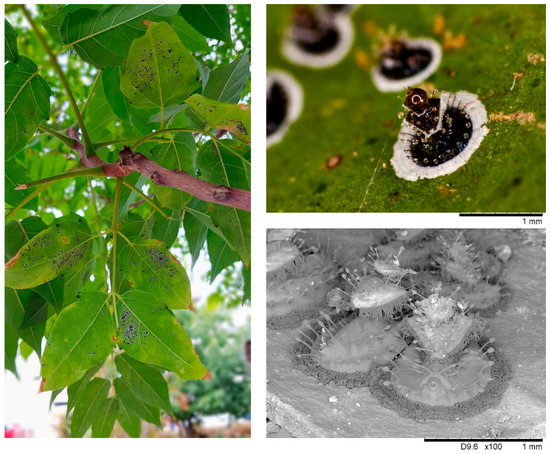