Acromyrmex fracticornis grass-cutting ants construct conspicuous chimney-shaped nest turrets made of intermeshed grass fragments. We asked whether turrets are constructed by merely piling up nearby materials around the entrance, or whether ants incorporate different materials as the turret develops. By removing the original nest turrets and following their rebuilding process over three consecutive days, age-dependent changes in wall morphology and inner lining fabrics were characterized. Micromorphological descriptions based on thin sections of turret walls revealed the building behaviors involved. Ants started by collecting nearby twigs and dry grass fragments that are piled up around the nest entrance. Several large fragments held the structure like beams. As a net-like structure grew, soil pellets were placed in between the intermeshed plant fragments from the turret base to the top, reinforcing the structure. Concomitantly, the turret inner wall was lined with soil pellets, starting from the base. Therefore, the consolidation of the turret occurred both over time and from its base upwards. It is argued that nest turrets do not simply arise by the arbitrary deposition of nearby materials, and that workers selectively incorporate large materials at the beginning, and respond to the developing structure by reinforcing the intermeshed plant fragments over time. View Full-Text
Keywords: building behavior; Acromyrmex fracticornis; leaf-cutting ants; collective pattern; architecture; self-organization; microstructure; material composition; thin sections building behavior; Acromyrmex fracticornis; leaf-cutting ants; collective pattern; architecture; self-organization; microstructure; material composition; thin sections
►▼ Show Figures 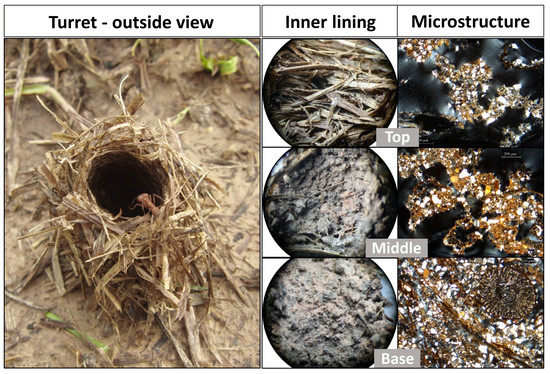