Susceptibility of Various Developmental Stages of the Fall Armyworm, Spodoptera frugiperda, to Entomopathogenic Nematodes
Next Article in Special Issue

Bacteria have occupied a wide range of habitats including insect hosts. There they can strongly affect host physiology and ecology in a positive or negative way. Bacteria living exclusively inside other organisms are called endosymbionts. They often establish a long-term and stable association with their host. Although more and more studies focus on endosymbiont–insect interactions, the group of Neuroptera is largely neglected in such studies. We were interested in the common green lacewing (Chrysoperla carnea), a representative of Neuroptera, which is mainly known for its use in biological pest control. We asked ourselves which endosymbionts are present in these lacewings. By screening natural and laboratory populations, we found that the endosymbiont Rickettsia is present in all populations but the symbiont Sodalis only occurred in laboratory populations. We were curious whether both endosymbionts affect reproduction success. Through establishing and studying green lacewing lines carrying different endosymbionts, we found that Rickettsia had no effect on the insect reproduction, while Sodalis reduced the number of eggs laid by lacewings, alone and in co-infections with Rickettsia. The economic and ecological importance of green lacewings in biological pest control warrants a more profound understanding of its biology, which might be strongly influenced by symbionts.

Endosymbionts are widely distributed in insects and can strongly affect their host ecology. The common green lacewing (Chrysoperla carnea) is a neuropteran insect which is widely used in biological pest control. However, their endosymbionts and their interactions with their hosts have not been very well studied. Therefore, we screened for endosymbionts in natural and laboratory populations of Ch. carnea using diagnostic PCR amplicons. We found the endosymbiont Rickettsia to be very common in all screened natural and laboratory populations, while a hitherto uncharacterized Sodalis strain was found only in laboratory populations. By establishing lacewing lines with no, single or co-infections of Sodalis and Rickettsia, we found a high vertical transmission rate for both endosymbionts (>89%). However, we were only able to estimate these numbers for co-infected lacewings. Sodalis negatively affected the reproductive success in single and co-infected Ch. carnea, while Rickettsia showed no effect. We hypothesize that the fitness costs accrued by Sodalis infections might be more tolerable in the laboratory than in natural populations, as the latter are also prone to fluctuating environmental conditions and natural enemies. The economic and ecological importance of lacewings in biological pest control warrants a more profound understanding of its biology, which might be influenced by symbionts. View Full-Text
Keywords: biological pest control; co-infection; endosymbiont; Neuroptera; Rickettsiales; symbiosis biological pest control; co-infection; endosymbiont; Neuroptera; Rickettsiales; symbiosis
►▼ Show Figures 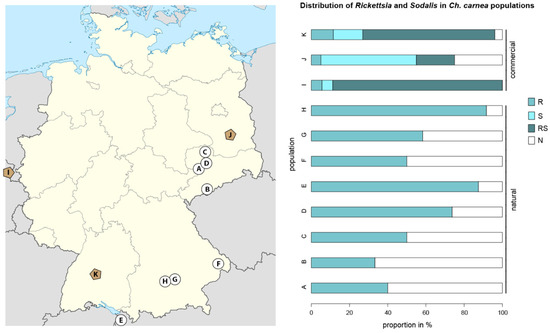