A Strain of Bacillus thuringiensis Containing a Novel cry7Aa2 Gene that Is Toxic to Leptinotarsa decemlineata (Say) (Coleoptera: Chrysomelidae)

The genome of the Bacillus thuringiensis BM311.1 strain was sequenced and assembled in 359 contigs containing a total of 6,390,221 bp. The plasmidic ORF of a putative cry gene from this strain was identified as a potential novel Cry protein of 1138 amino acid residues with a 98% identity compared to Cry7Aa1 and a predicted molecular mass of 129.4 kDa. The primary structure of Cry7Aa2, which had eight conserved blocks and the classical structure of three domains, differed in 28 amino acid residues from that of Cry7Aa1. The cry7Aa2 gene was amplified by PCR and then expressed in the acrystalliferous strain BMB171. SDS-PAGE analysis confirmed the predicted molecular mass for the Cry7Aa2 protein and revealed that after in vitro trypsin incubation, the protein was degraded to a toxin of 62 kDa. However, when treated with digestive fluids from Leptinotarsa decemlineata larvae, one major proteinase-resistant fragment of slightly smaller size was produced. The spore and crystal mixture produced by the wild-type BM311.1 strain against L. decemlineata neonate larvae resulted in a LC50 value of 18.8 μg/mL, which was statistically similar to the estimated LC50 of 20.8 μg/mL for the recombinant BMB17-Cry7Aa2 strain. In addition, when this novel toxin was activated in vitro with commercial trypsin, the LC50 value was reduced 3.8-fold to LC50 = 4.9 μg/mL. The potential advantages of Cry7Aa2 protoxin compared to Cry7Aa1 protoxin when used in the control of insect pests are discussed. View Full-Text
Keywords: Bacillus thuringiensis; cry gene; toxins; Coleoptera; Colorado potato beetle; bioassay Bacillus thuringiensis; cry gene; toxins; Coleoptera; Colorado potato beetle; bioassay
►▼ Show Figures 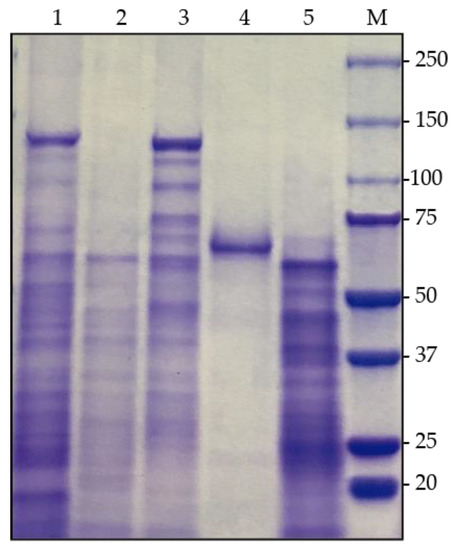