Effects of Fine-Mesh Exclusion Netting on Pests of Blackberry

Caneberry growers struggle to meet the demands for fresh, local, and organic fruit due to strong pest pressure, which is a challenge to manage without the use of insecticides [1,2]. Conventional insecticides in the pyrethroid, organophosphate, and spinosyn classes are efficient in controlling most insect pests of fruit crops, however, many endanger beneficial organisms like pollinators and natural enemies of pests [3]. Even organic registered insecticides are broad spectrum and can have lethal and sub-lethal consequences for beneficial organisms [4,5]. Because of this, organic certification suggests that farmers use chemical pest control (biological or botanically-based) only after systems-based non-chemical strategies have been employed and have failed to achieve sufficient pest control. Therefore, organic farmers need effective alternatives to organic insecticides [6]. Indeed, given that a number of fruit crops, including caneberries, depend on pollination and natural enemies to improve yield or fruit quality, growers and researchers continue to develop and improve pest-control strategies that are effective alternatives to insecticidal sprays [7].
Cultural practices, physical barriers (especially mesh netting exclusions), introduction of biological control agents, and the use of plant-derived deterrents are current alternatives to insecticides that hold promise for pest control. For instance, the planting of early ripening crop varieties can help growers avoid infestations of pests if the fruiting period does not overlap with the period of pest populations [8]. However, this may limit grower access to certain late season markets that may earn a premium for berries. Alternatively, sanitary measures can be undertaken and include the removal of nearby, wild, fruiting plants and groundcover vegetation as well as the collection of dropped or leftover fruit in order to reduce food and host plant resources available to pests [9].
Fine-mesh netting exclusions act as physical barriers to limit insect pests from consuming above-ground vegetative material and fruits. In vegetable crops, ‘floating row covers’ or ‘meso-tunnels’ have been used to cover individual or multiple rows with fine-mesh materials that limit insect access to plants [10,11,12,13,14,15]. Fine-mesh netting exclusions have also been applied in grape [16], blueberry [17,18,19], and raspberry [20,21]. Indeed, the adoption of fine-mesh nets may be particularly feasible for producers of grapes, caneberries, and blueberries who already employ course-mesh netting to prevent frugivorous birds from consuming their crop [22]. For these growers, fine-mesh nets could be easily substituted for bird netting without any additional cost for netting infrastructure. Fine-mesh netting would still successfully exclude fruit-eating birds and could provide the added benefit of suppressing insect pests. Additionally, in cropping systems where low thresholds of pest activity are required due to the high risk of disease transmission or food safety concerns, netting may be especially promising. The production of bacterial wilt-prone curcubitaceous crops, such as muskmelon and acorn squash, are examples of some of the current inquiries into this topic [10,11,12]. When examined in the field, some variable benefits for crop yield and bacterial wilt incidence were reported when spun-bonded or fine-mesh exclusion nets were employed. In fruit and berry production in the southeastern region of the USA, however, there are still few field trials evaluating the efficacy of fine-mesh exclusion netting systems.
There are a number of important insect pests of caneberries common to the southeastern United States. Of particular importance is the invasive spotted wing Drosophila (Drosophila suzukii Matsumara; SWD), that is endemic to eastern Asia. During SWD’s initial infestation in 2008, USA west coast growers saw a combined loss of 16.4% of all blueberry, raspberry, blackberry, strawberry, and cherry (421.5 million USD) [23]. More recently, a survey of 82 raspberry producers in Minnesota estimated that both organic and conventional producers lose about 20% of their raspberry yields to SWD infestation [24]. They estimated that financial losses from SWD totaled about 11.8 million USD in raspberry production in that state. This statistic is interesting to us because Minnesota growers rely heavily on local, direct-to-market sales to make raspberry production profitable. This is quite similar to the production of blackberries in Kentucky. Crop losses of 20% in our state have the potential to force growers away from the production of caneberries towards other less vulnerable small fruits.
Female SWD have a unique ability to damage fruits using their highly sclerotized ovipositor that bears enlarged, tooth-like bristles [25]. Gravid female SWD show a distinct preference for oviposition within partially ripened fruits [9,26]. Other vinegar flies (Drosophila spp.) also infest damaged caneberries and can cause secondary damage. In addition to Drosophilid flies, the invasive Japanese beetle (Popillia japonica Newman) and the green June beetle (Cotinis nitida L.) are devastating pests of caneberries during mid and late summer. These beetles tend to swarm on fruiting plants, attracted by feeding-induced plant volatiles, and chew directly into fruits [27,28]. Finally, a number of bird species consume ripe fruits of caneberries by plucking individual drupelets from fruit clusters during harvest months [22].
In this study, we evaluated whether fine-mesh exclusion netting would limit damage from insect and bird pests and increase marketable yield in blackberry production in Kentucky. We compared fine-mesh exclusion netting systems to an organic standard insecticidal management system at field scale to provide a comparison of the two crop protection strategies. We predicted that fine-mesh exclusion netting would reduce levels of insect pests and increase marketable yield compared to the organic standard insecticidal system.

This study was conducted at the University of Kentucky horticulture research farm in Lexington, Kentucky in the summer of 2018 (plant hardiness zone 6b). This approximately 50-hectare research farm is surrounded by a landscape of urban and rural development. The farm is split into organic and conventional halves where a wide variety of perennial and annual crops are grown. Our research focused on a blackberry plot adjacent to conventional plots of apple orchard and wine-grape vineyards. The plot consisted of six rows, each containing three plants each of mature Triple Crown, Hull, and Chester varieties for a total of nine plants per row. The blackberries were planted with a 1.8 m tall trellis in rows with 1 m spacing within rows and 3.5 m wide alleys between rows. Each row had a length of 25 m. Varieties were planted within row in a randomized complete block design. In June of 2018, each row was hand-weeded, blackberry canes were trimmed back, and were then maintained on a trellis system. We chose to perform this experiment on a small-scale plot in order to imitate the small-scale production of the fruit found in Kentucky. In this state, most blackberry production consists of smallholder farms that grow blackberries in limited quantities for self-harvest (e.g., pick-your-own), local markets, or for use as ingredients in value-added products.

3.1. Spotted Wing Drosophila and Other Vinegar Flies in Baited Traps

Data analysis using linear mixed models revealed a significant interaction between sampling week and management treatment in baited traps when calculated across all four trapping weeks (Table 1A, Figure 2A). This interaction suggests that our two treatments of fine-mesh exclusion versus organic insecticide sprays affected the presence of spotted wing Drosophila inside each row quite variably across each of the four weeks. Very low numbers of SWD were trapped during the first three weeks, as only four total SWD individuals were trapped during this time. There was no significant difference between exclusion treatments in week one (t = 1.00, p-value = 0.4226), week two (t = 1.00, p-value = 0.4226), nor week three (t = 2.00, p-value = 0.1835). However, in week four, there were significantly fewer SWD in fine-mesh netting exclusion rows compared to organic insecticide treated rows (t = 4.44, p-value = 0.0472) (Figure 3B).
Other non-SWD vinegar flies were present in high numbers across all four weeks (Figure 2B). Nonetheless, a significant interaction between sampling week and fly count was again observed (Table 1B). Individual week analysis revealed significantly lower vinegar fly captures in exclusion rows compared to insecticide treated rows for week one (t = 5.23, p-value = 0.0347) and week two (t = 5.50, p-value = 0.0315), but non-significant effects in week three (t = 2.63, p-value = 0.1195) and week four (t = 1.65, p-value = 0.2414).

In conclusion, we have shown that fine-mesh exclusion netting functionally reduced the damage of some important pests of blackberry by restricting their access to fruits and foliage. This suggests that netting can be a viable alternative to organic insecticide treatment within the southern United States. Investigation into the overall profitability of this management system was beyond the scope of this study. Additional in-depth economic and agronomic analyses will be required to determine whether it is more profitable to switch from current organic pest control practices to exclusionary netting in blackberry production. Future studies should look to compare the costs of both the material inputs and labor required by both management schemes. Future studies could also investigate the use of fine-mesh netting exclusion for late-blooming varieties of different berry species, where netting enclosures may need to be artificially inoculated with pollinator species. Additional repetitions of this work should look to place multiple baited SWD traps within each treatment at different heights from the soil in order to look at the spatial tendencies of adult SWD within netted and unnetted blackberries. Nonetheless, this study suggests that for organic growers, fine-mesh exclusion netting is a viable alternative to insecticide treatment.

This research and the Article Processing Charge were both funded by the National Institute of Food and Agriculture, U.S. Department of Agriculture Hatch Grant (KY008079).

We extend our thanks to Steve Diver, Neil Wilson, and Jay Tucker at the University of Kentucky Horticultural Research Farm for their extensive assistance in the maintenance of these blackberry rows. We also thank John Strang and Mark Williams for providing a wealth of horticultural knowledge that allowed us to maintain these berries. Finally, we thank Lauren Fann, Kyla O’Hearn, Robby Brockman, and Karina Garcia for their review of and edits to this manuscript. 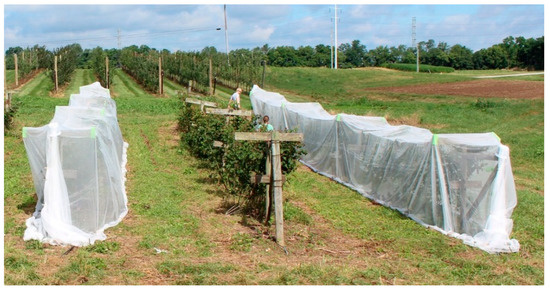