Aedes aegypti is an important mosquito vector of several arboviruses, including dengue, yellow fever, Zika, and Chikungunya, which cause significant human morbidity and mortality globally. In certain populations of this mosquito, a native meiotic drive system causes abnormal spermatogenesis that results in highly male-biased progenies from some matings. Although the basic genetics and cytogenetics of the drive mechanism were elucidated, very little is known on a transcriptome level about how the meiotic drive phenotype is expressed in individual males. To address this question, we conducted a whole-genome microarray expression study of testes from a meiotic-drive-carrying strain (T37) in comparison with testes from a non-drive-carrying strain (RED). Based on bioinformatics analyses of the microarray data, we identified 209 genes associated with the meiotic drive phenotype that were significantly differentially expressed between the two strains. K-means cluster analysis revealed nine clusters, in which genes upregulated in T37 testes were assigned to five clusters and genes downregulated in T37 testes were assigned to four clusters. Our data further revealed that genes related to protein translation, phosphorylation, and binding, as well as to G-protein-coupled receptor (GPCR) and peptidase activities, are differentially upregulated in testes from males with the meiotic drive genotype. Based on pathway analysis of these differentially expressed genes, it was observed that the glycosylphosphatidylinositol (GPI)-anchor biosynthesis pathway may play a role in the meiotic drive system. Overall, this investigation enhances our understanding of whole-genome gene expression associated with the meiotic drive system in Ae. aegypti. View Full-Text
Keywords: Culicidae; microarray; expression profiling; sex ratio distortion Culicidae; microarray; expression profiling; sex ratio distortion
►▼ Show Figures 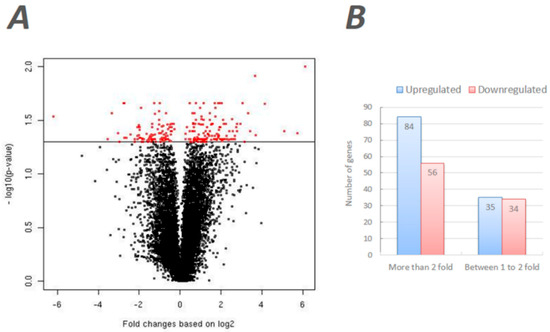