Beekeepers providing pollination services for California almond orchards have reported observing dead or malformed brood during and immediately after almond bloom—effects that they attribute to pesticide exposure. The objective of this study was to test commonly used insecticides and fungicides during almond bloom on honey bee larval development in a laboratory bioassay. In vitro rearing of worker honey bee larvae was performed to test the effect of three insecticides (chlorantraniliprole, diflubenzuron, and methoxyfenozide) and three fungicides (propiconazole, iprodione, and a mixture of boscalid-pyraclostrobin), applied alone or in insecticide-fungicide combinations, on larval development. Young worker larvae were fed diets contaminated with active ingredients at concentration ratios simulating a tank-mix at the maximum label rate. Overall, larvae receiving insecticide and insecticide-fungicide combinations were less likely to survive to adulthood when compared to the control or fungicide-only treatments. The insecticide chlorantraniliprole increased larval mortality when combined with the fungicides propiconazole or iprodione, but not alone; the chlorantraniliprole-propiconazole combination was also found to be highly toxic to adult workers treated topically. Diflubenzuron generally increased larval mortality, but no synergistic effect was observed when combined with fungicides. Neither methoxyfenozide nor any methoxyfenozide-fungicide combination increased mortality. Exposure to insecticides applied during almond bloom has the potential to harm honey bees and this effect may, in certain instances, be more damaging when insecticides are applied in combination with fungicides.
Keywords: synergism; Apis mellifera; Altacor; Intrepid; Dimilin; Pristine; Tilt; Rovral; pollination synergism; Apis mellifera; Altacor; Intrepid; Dimilin; Pristine; Tilt; Rovral; pollination

Technical grade pesticides were used for all bioassays (>95% purity, Sigma Aldrich, St. Louis, MI, USA). Serial dilutions in acetone were used to create test solutions for adult or larval treatment. Relative concentrations of the insecticides and fungicides used were determined based on the ratio of the maximum label rate of active ingredient for application to almonds.

Honey bee colonies headed by young, commercially produced, non-sister Italian or New World Carniolan queens were maintained at The Ohio State University apiaries in Wooster and Columbus and managed according to standard beekeeping practice. Colonies were treated for Varroa destructor mites using formic acid or oxalic acid according to label instructions as needed. No synthetic miticides that may accumulate in beeswax [51] had ever been used in hive equipment in prior years. A total of 15 colonies of these were used in adult and larval studies carried out from late April through early September in 2016 and 2017.

In vitro larval rearing bioassays (Figure 2) were performed using the Aupinel method [52] as modified by Schmehl et al. [48]. Briefly, young larvae, less than 24 h old, were grafted into 48-welled polystyrene microplates (Corning Life Sciences, Oneonta, NY, USA) lined with Brown Cell Cups (Mann Lake Ltd., Hackensack, MN, USA), where they were kept in an incubated desiccator at 35 °C and 95% humidity. The larvae were fed a larval diet until pupation, when they were transferred to fresh microplates and moved to a second desiccator maintained at 75% humidity. The larval diet consisted of distilled water, royal jelly (Stakich, Troy, MI, USA), glucose, fructose, and yeast extract (Fisher Scientific, Columbus, OH, USA). Larvae were fed a diet containing a test treatment or solvent control on day 4 of the larval feeding schedule. Pesticides dissolved in acetone were incorporated into the larval diet at 2% total volume. Insecticide treatments consisted of 1 μg chlorantraniliprole, 2.25 μg methoxyfenozide, and 2.28 μg diflubenzuron per larva. Fungicide treatments consisted of 2.25 μg propiconazole, 5.05 μg iprodione, and the combination of 4.68 μg boscalid and 2.37 μg pyraclostrobin per larva. Insecticide-fungicide combination treatments, a negative acetone-only control, and a positive control containing 5 μg dimethoate per larva were included throughout the study in accordance with the Aupinel method [52]. At least three replicates were performed for each treatment. Each treatment replicate consisted of between 10 and 16 larvae grafted from two to three different colonies. In total, 1417 larvae were taken from 12 colonies for in vitro testing.

Topical dose response bioassays were performed on 3-day-old adult worker bees. Frames of late stage capped brood were taken from four colonies and kept in a dark humidified (60–80% RH) incubator at 34 °C. Bees were taken from four different colonies. Newly emerged bees were brushed from frames and placed in groups of approximately 20 in paper cups (177 cm3; Uniq 6 oz. Ice Cream Cup, FrozenDessertSupplies.com, Gilbert, AZ, USA). Cups were covered with cotton cheese cloth (Grade 40; Raglady.com, Stevensville, MD) and secured with rubber bands. Each cup of bees was returned to the incubator and provisioned with water in a punctured microcentrifuge tube (1.5 mL; Fisher Scientific) and sugar candy made from finely ground granulated sugar and heavy sugar syrup (2:1 sucrose in water w/w).
After three days of feeding, bees were topically dosed with 5 μl acetone solutions containing insecticide, fungicide, a combination, or acetone containing no test chemical. A 50-μl glass micropipette (Hamilton 705SNR, Reno, NV, USA) fitted in a repeating dispenser (Hamilton PB-600) was used to apply doses to the dorsal surface of the bee thorax. Seven chlorantraniliprole doses ranging from 0.005 μg to 5 μg per bee were administered. A single dose at the solubility limit of methoxyfenozide in acetone, 25 μg per bee, was used. Seven combination treatments containing chlorantraniliprole (0.005 to 5.0 μg per bee) with propiconazole (0.011 to 11.260 μg per bee) were administered. Preliminary bioassays confirmed that propiconazole alone up to 11.3 μg per bee did not result in significant mortality. Each treatment replicate was accompanied by an acetone solvent control group. At least four dose response replicates consisting of eight cups were performed for chlorantraniliprole and the combination treatments, testing a total of 1347 adult bees. Three replicates of the methoxyfenozide treatment were performed. Mortality was recorded 48 h after topical treatment.

Results from larval rearing bioassays were analyzed with a generalized linear mixed model in SAS (PROC GLIMMIX, version 9.4; SAS Institute Inc. Cary, NC, USA). A binomial distribution was used as the response variable was binary; live or dead. Treatment was used as the fixed effect and grafting day as random effect. Post hoc pairwise comparisons of survival between treatments were performed using the Least Squares Means difference.
Mortality data from adult bee dose response bioassays was analyzed using generalized linear models (GLMs) with a log-probit transformation to calculate LD50 values and 95% confidence intervals [38,53]. Pairwise tests were used to compare treatments and assess interactive effects between test chemical combinations. A test of parallelism was used to assess differences in the slope of the dose-response. A test of equality was used to assess differences between dose-response in one treatment relative to another. Statistical analysis of the results from adult assays was performed in R (version 3.4.2, R Foundation for Statistical Computing, Vienna, Austria).

BeeREX (version 1.0) is a model developed by the US EPA Office of Pesticide Program’s Environmental Fate and Effects Division [50] as a Tier 1 screening tool to assess risks specifically posed by pesticides to honey bees. BeeREX risk quotients for acute topical chlorantraniliprole as well as topical chlorantraniliprole combined with propiconazole were calculated using LD50 values generated in this study.

During almond pollination honey bees may be exposed to a variety of insecticides and fungicides, most of which have not been tested in combination with each other for synergistic effects. This study aimed to determine whether the most common insecticides and fungicides used on California almonds during bloom exhibit synergistic toxicity to honey bee larvae and adults when combined.
Diflubenzuron continues to be applied to California almonds during bloom, although its use has decreased in the past several years (Figure 1). Previous studies have demonstrated that diflubenzuron is of low toxicity to adult bees, yet it is capable of producing negative impacts on brood production [18,20,21,25,26,27]. The significant decrease in larval survival observed in the diflubenzuron-treated larvae in this study suggests that diflubenzuron, regardless of its tank-mix companions, does pose a risk to honey bee larvae.
The addition of the SBI fungicide propiconazole to chlorantraniliprole resulted in a substantial increase in toxicity to both adult and larval honey bees compared to chlorantraniliprole alone. The synergistic toxicity observed with chlorantraniliprole is likely caused by propiconazole inhibiting P450 enzymes, which serve to detoxify this insecticide in a similar way to how other SBI fungicides enhance the toxicity of other insecticide classes [38]. This suggests that honey bee P450s may play a critical role in chlorantraniliprole tolerance in honey bees. Elucidating the role of P450s in diamide detoxification in bees should be a priority for future research.
The BeeREX 1.0 model [50] for Tier 1 risk assessment allows further interpretation of the toxicity data generated. BeeREX allows for the calculation of Risk Quotients (RQ) by relating the LD50 values and the maximum field application rate. The Level of Concern (LOC) for acute honey bee exposure has been set at an RQ < 0.4, a level at which minimal harm to bees in field applications is expected [54]. Using BeeREX, we determined that chlorantraniliprole applied at the maximum label rate for almonds (0.099 lbs./acre) has an RQ of 0.37. A simulated tank-mix combination of chlorantraniliprole and propiconazole, each at their maximum labeled application rates, generates an RQ of 2.73, which exceeds the LOC and indicates that this insecticide-fungicide combination may pose a risk to bee health.
The BeeREX model can also be used to estimate larval honey bee exposure to chlorantraniliprole to be 1.35 μg at the maximum label-recommended application rate. In larval rearing bioassays, 1 μg chlorantraniliprole with 2.25 μg propiconazole resulted in an average of 89.1% larval mortality. Pollen contaminated with chlorantraniliprole and propiconazole that is brought back to hives has the potential to kill immature bees.

This study demonstrates the risks that pesticides used in almond orchards during bloom pose to honey bees. The larval toxicity of diflubenzuron as well as the adult and larval toxicity of chlorantraniliprole when combined with an SBI fungicide, propiconazole, could explain the sporadic losses observed by beekeepers in almond orchards. The findings presented here demonstrate how pesticides that initially appear to be safe for honey bees may demonstrate toxicity to worker adults and larvae in field-relevant tank-mix combinations.

This research was funded by The Almond Board of California (17-POLL17-R. Johnson), the College of Wooster Henry J. Copeland Fund for Independent Study, and state and federal appropriations to the Ohio Agricultural Research and Development Center (USDA-NIFA Projects OHO01277 and OHO01355-MRF). 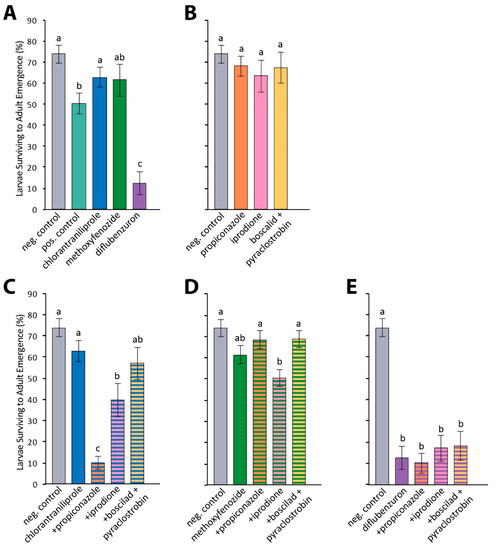