Astronomical Seeing at Maidanak Observatory during the Year 2018

Aktam Hafizov
1
1
Ulugh Beg Astronomical Institute of the Uzbekistan Academy of Sciences, Astronomy str. 33, Tashkent 100052, Uzbekistan
2
Department of Astronomy and Atmospheric Physics, Physics Faculty, National University of Uzbekistan, 4 University str., Tashkent 100174, Uzbekistan
*
Author to whom correspondence should be addressed.
Academic Editor: Francois Hammer
Galaxies 2021, 9(2), 38; https://doi.org/10.3390/galaxies9020038
Received: 10 March 2021 / Revised: 12 May 2021 / Accepted: 18 May 2021 / Published: 21 May 2021
(This article belongs to the Collection A Trip across the Universe: Our Present Knowledge and Future Perspectives)

The performance of ground-based astronomical observatories is limited by the terrestrial atmosphere. Astronomical seeing is one of the key parameters characterizing overall turbulence of the atmosphere above the observatory. The optical efficiency of telescopes depends largely on the astronomical seeing.
Maidanak astronomical observatory (MAO, longitude 66°56 E, latitude 38°41 N, 2600 m above sea level) is located at the south-east of the Republic of Uzbekistan. It is the main observational facility of the Ulugh Beg Astronomical Institute (UBAI), Uzbekistan Academy of Sciences. There are seven telescopes with 50-cm to 1.5-m apertures in the observatory [1]. Observations of different astronomical objects are carried out at MAO: gravitational-wave optical counterparts within the framework of the GRANDMA collaboration; gamma-ray bursts (GRB), gravitationally lensed systems (GLS), blazars, supernova, variable stars, exoplanets, and minor planets [2,3,4,5,6,7,8].
Optical properties of the atmosphere have been studied at MAO since it was founded in the late 1960s. The previous site testing campaign began in 1996 within the framework of the international collaboration led by the European Southern Observatory (ESO) [9]. Results of site testing studies at Maidanak Observatory in Uzbekistan in this period and a comparison to leading observatories showed that atmospheric parameters place Maidanak Observatory among the best international astronomical sites for high angular resolution observations [10].
The amount of clear night-time hours for Mt. Maidanak is about 60% of available yearly dark time—in absolute units this corresponds to 2000 h. The summer observing capacity of Mt. Maidanak is two times (more than 90% in July) higher than in winter (up to 50% in February).
The monitoring of astronomical seeing was carried out at Maidanak observatory during 1996–2003 using ESO DIMM [11] which was previously used for site testing of ESO observatories of La Silla and Paranal in Chile. The statistics of the whole timeseries revealed that the mean value of seeing is 0.76 arcseconds, the median is 0.71 arcseconds. The best monthly median seeing, 0.62 arcseconds, was observed in November [12].
In 2017, a project with a new 4-m telescope was initiated in Uzbekistan. Obviously, the first candidate for the place of installation was Maidanak Observatory. This acted as a new motivation to start the monitoring of astronomical seeing and other atmospheric parameters at MAO.
During the monitoring, it was planned to identify the following:

The light from the stars passes through the Earth’s atmosphere, and the wave front coming in the same phase reaches the Earth’s surface in different phases. As a result, the diffraction pattern of the stars formed in the telescope changes. The resolution θ of a telescope limited by atmospheric turbulence, as defined by the Strehl criterion, is θ [11]:
Here, r0 is Fried’s parameter, and λ—is the wavelength. Fried’s parameter can be measured from the image motion using a small telescope [11]. Astronomical seeing is measured by the FWHM of the intensity of the star profile, which is the best angular resolution (in arcseconds) that can be achieved by an optical telescope in a long exposure time. Taking into account the Earth’s atmosphere, the value of astronomical seeing is defined as εFWHM and is determined according to the following formula:
One of the most effective methods of measuring astronomical seeing is the differential image method realized in a DIMMs [13]. In our case, it is based on a Celestron-11 telescope with a 279 mm primary mirror and a focal length of 2800 mm (Figure 1). Two circular masks are installed on the Schmidt corrector of the telescope. The masks are of 5 cm in diameter and the distance between the centers is of 19 cm. A 195-arcseconds wedge prism is installed on one of the holes, which creates the second image of the stars. A Santa Barbara instrument group’s (SBIG) ST-5C camera is used as a detector on the focal plane of the telescope.
Due to atmospheric turbulence, image motion occurs—the distance between two images changes in two directions. The principle of the DIMM is to determine the relative displacements of centroids of two CCD-images along the x (longitudinal) and y (transverse) directions. The differential image motion variations of the set of the 200 dx and dy measurements are used to calculate εFWHM according to [13]. This determines the value of astronomical seeing in units of arcseconds. The smaller the motion of the star (the smaller the astronomical seeing), the more suitable the atmosphere of the observatory. In the world’s leading astronomical observations, the value of the seeing is in the order of 0.6–0.8 arcseconds.
The DIMM we used at Maidanak Observatory in 2018 is the modified version of the instrument used in 1996–2003. During 1996–2003, we used ESO-DIMM [11] with the camera SBIG ST-5, a serial port camera. Since the speed of data transmission in the serial port was limited, the time required for one exposure was about 4 min for 40 images in 2 different exposures. In 2007, we replaced the camera with a more rapid one—ST-5C with a parallel interface but having the same pixel size and parameters. We used software based on Cerro-Tololo Inter-American observatories’ (CTIO) Robodimm [14]. Despite the software being different, we used the same method described in [11] and updated in [13].
In order to have a good signal-to-noise ratio, bright stars are observed close to the zenith to have the air mass be at its smallest. A particular star is observed for a maximum of 4 h—two hours before and after culmination. A part of the list of stars selected for observation is given in Table 1. It lists the names, magnitudes, and equatorial coordinates of some of the bright stars that were observed.
One of the most important aspects of measuring astronomical seeing is choosing the optimal exposure time (in milliseconds). It must be big enough to have two bright images of the same star with the highest possible signal-to-noise ratio in order to measure the centroids of images accurately. At the same time, the exposure time should be as short as possible to “freeze” the atmosphere. To overcome this situation, an “interlaced exposures” method is used—first DIMM takes exposure τ1 (say, 5 ms) and τ2 (double of τ1—10 ms). Then, using two different exposure times, it “extrapolates” seeing to 0 exposure time using Equation (3), also described in [13].
For each exposure time, the differential displacements of the centroids of the images in x and y coordinates are measured. The variance of the set of the data is used for the estimations of the values of ε1 and ε2 in two exposures τ1 and τ2. Then, using the following expression, we can find the value of seeing ε0 [15]: where c1 = (ε1/ε2)3/4. To reduce the statistical noise, factor c1 is smoothed over time using a moving average method and then used in (3) to correct individual measurements [15].
In order to calculate one seeing value for a set of 200 measurements, the differential motions (dx and dy) are recorded in every exposure time.

Overall statistics of astronomical seeing measured in this campaign are in good agreement with those of the period 1996–2003. Since the measurements carried out include the period where seeing is good (September–November) it was expected that the median value would be lower than the 0.70 arcseconds, but this was not the case in 2018.
Due to the short duration of the measurement campaign in 2018, it is not possible to draw a complete conclusion. In order to find the reasons of the seasonal changes, a continuous monitoring of this parameter is required. This requires regular observations of at least one full year or more.

This research work was carried out and funded under the FA-Atex-2018-392 “Study of the astroclimate of the Maidanak high mountain observatory to optimize the monitoring programs of the 4-m telescope”.

We would like to thank S. A. Ehgamberdiev, S. P. Ilyasov, S. B. Tursunkulov and R. R. Hazratov for their help in conducting this research work and writing the article. The authors are grateful to A. Tokovinin for kindly providing the RoboDIMM code which helped much in coding local observational software. 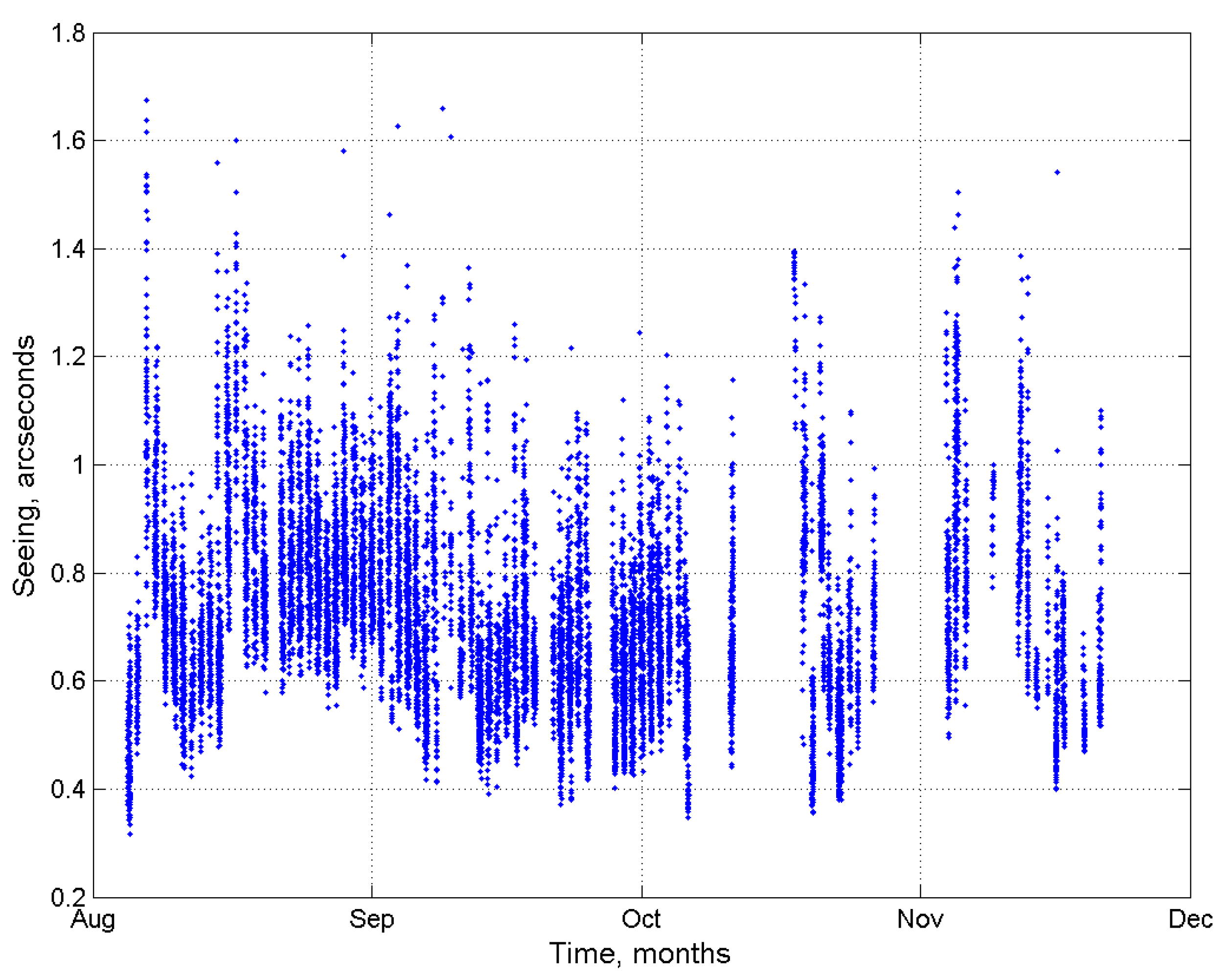