I review some aspects related to the influence of planets on the evolution of stars before and beyond the main sequence. Some processes include the tidal destruction of a planet on to a very young main sequence star, on to a low-mass main sequence star, and on to a brown dwarf. This process releases gravitational energy that might be observed as a faint intermediate luminosity optical transient (ILOT) event. I then summarize the view that some elliptical planetary nebulae are shaped by planets. When the planet interacts with a low-mass, upper asymptotic giant branch (AGB) star, it both enhances the mass-loss rate and shapes the wind to form an elliptical planetary nebula, mainly by spinning up the envelope and by exciting waves in the envelope. If no interaction with a companion, stellar or substellar, takes place beyond the main sequence, the star is termed a Jsolated star, and its mass-loss rates on the giant branches are likely to be much lower than what is traditionally assumed. View Full-Text
Keywords: planetary systems; planetary nebulae; stars: binaries; stars: AGB and post-AGB; stars: variables: general planetary systems; planetary nebulae; stars: binaries; stars: AGB and post-AGB; stars: variables: general
►▼ Show Figures 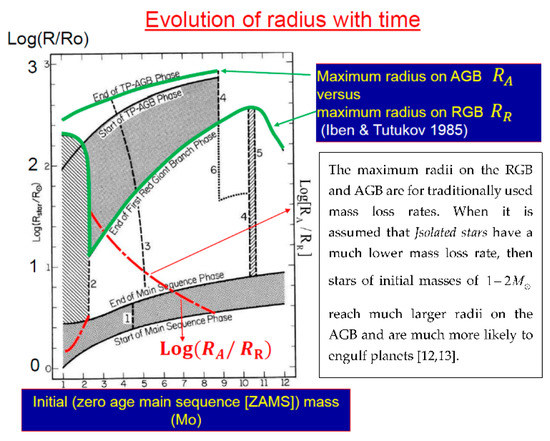