:
We report the selection of blazar candidates behind the Large and Small Magellanic Clouds. Both flat spectrum radio quasar and BL Lacreate objects were selected based on the long-term, multi-colour Optical Gravitational Lensing Experiment photometric data. We cross-correlated the Magellanic Quasar Survey catalogue of spectroscopically confirmed quasars and quasar candidates located behind the Magellanic Clouds with the radio data at six frequencies from 0.8 to 20 GHz. Among the 1654 objects visible in optical range, we identified a sample of 44 newly selected blazar candidates, including 27 flat spectrum radio quasars and 17 BL Lacs. We examined selected objects with respect to their radio, optical, and mid-infrared properties.
Keywords:
galaxies: active; flat spectrum radio quasars and BL Lacertae blazars; individual: Small and Large Magellanic Clouds

The Optical Gravitational Lensing Experiment (OGLE) has observed a few million stars in the area of both Magellanic Clouds (MCs). The Magellanic Quasars Survey (MQS) [1] is based on an OGLE-III phase of the experiment and was designed to increase the number of the identified active galactic nuclei (AGN) behind both MCs. This survey covers 100% of the LMC and 70% of the SMC OGLE-III areas, i.e., 42 deg2. The AGN candidates found in the MC fields were analysed in a four-step selection process: mid-infrared properties, optical variability, ROSAT X-ray counterparts, and, finally, optical spectroscopy study. Eventually, the MQS catalogue contains 758 quasars; around 10–15% of them should be radio loud [2] and several of them may be the flat spectrum radio quasar (FSRQ) type blazars according to the AGN unification scheme [3]. During the selection process of the MQS quasars, some of the AGN candidates were rejected in the spectroscopic analysis due to the lack of particular emission lines in their optical spectra and were listed in the separate list of featureless sources (FS), although still obeying any of the mid-infrared and optical variability criteria. The FS list consists of 669 and 229 objects from the LMC and the SMC fields, respectively, and some of them may be blazars of the BL Lac type.
Below, we present the selection procedure of blazars among the OGLE-detected AGN and AGN candidates. In particular, we cross-matched the MQS catalogue and the FS list with four radio catalogues, the Sydney University Molonglo Sky Survey (SUMSS) [4] at 0.843 GHz, the Australia Telescope 20 GHz (AT20G) [5] at 5, 8, and 20 GHz, the Parkes–MIT–NRAO (PMN) [6] at 4.85 GHz, and the Australia Telescope PMN follow-up (ATPMN) [7] at 4.8 and 8.6 GHz, to disclose both types of blazars.

The blazar candidates were selected based on the MQS catalogue and the FS list via (i) the radio and optical positioning; (ii) the cross-matching procedure; and (iii) the parameters examination of identified objects.
The positions of the selected quasars from the MQS catalogue and the sources from the FS list were examined against the positions of radio sources from the two radio catalogues: the SUMSS at 0.84 GHz and the ATCA at 4.8 and 8.6 GHz.
The cross-matching procedure was based on the archival data from four sky surveys: the SUMSS, AT20G, ATPMN, and PMN. We searched for the radio counterparts by cross-matching the optical positions of the MQS and FS sources with the positions of radio sources listed in the radio catalogues, using the standard spherical trigonometric distance procedure. Since various radio and optical surveys have different resolutions, we chose an error circle within which a source can be identified to be coincident with the same source from different catalogues: if the computed radius of the error circle, Δr, was found to be less than the square root of the quadratic sum of 1/3rd of optical and radio resolutions (∼1″ is assumed at optical frequencies), the radio counterpart was considered to be coincident with the optical source.
The further examination of the selected objects was based on the three parameters: the radio loudness (R), the radio spectral index (), and the mid-infrared spectral index (). OGLE I-band photometric observations and radio ATPMN, AT20G, or SUMSS data were used to calculate R, while were obtained for all the sources observed at at least two different frequencies. Mid-infrared data were provided by the Infrared Array Camera (IRAC) and Multiband Imaging Photometer for SIRTF (MIPS) instruments onboard the Spitzer Space Telescope, at 3.6, 4.5, 5.8, and 8.0 microns.
Figure 1 shows the radio contours overlayed on the gray scale optical images for the two exemplary identified blazar candidates. We used the Digitized Sky Survey (DSS) R-band optical images as grey scales and the radio data at 8.6, 4.85 or 0.845 GHz as contours. A black cross marks the optical position from the MQS catalogue or the FS list of each blazar candidate. All sources, which were found exclusively in the PMN catalogue, as well as other sources which were not associated with the peak of the radio emission, are considered as dubious and marked with the “a” symbol in the final list of the blazar candidates.
We searched for the fractional linear polarization degree (PDr) and linear polarization angle (PAr) of all the selected candidates to further verify if the selected objects are indeed blazars. We have examined the AT20G catalogue and analyzed polarized flux densities on 4.8 and 8.6 GHz radio maps of the MCs. Finally, we extracted nine objects from the selected sample: six FSRQs and three BL Lacs (listed in Table 1), noting that all of them are strongly polarized radio sources with PDr,4.8GHz > 3%.

The sky distribution of our blazar candidates sample is presented in Figure 2. The main results of blazar identification are listed below:
Considering the , R, and PDr parameters together, we suggest that nine candidates, including six FSRQ and three BL Lac type objects, can be safely recognized as newly identified blazars. 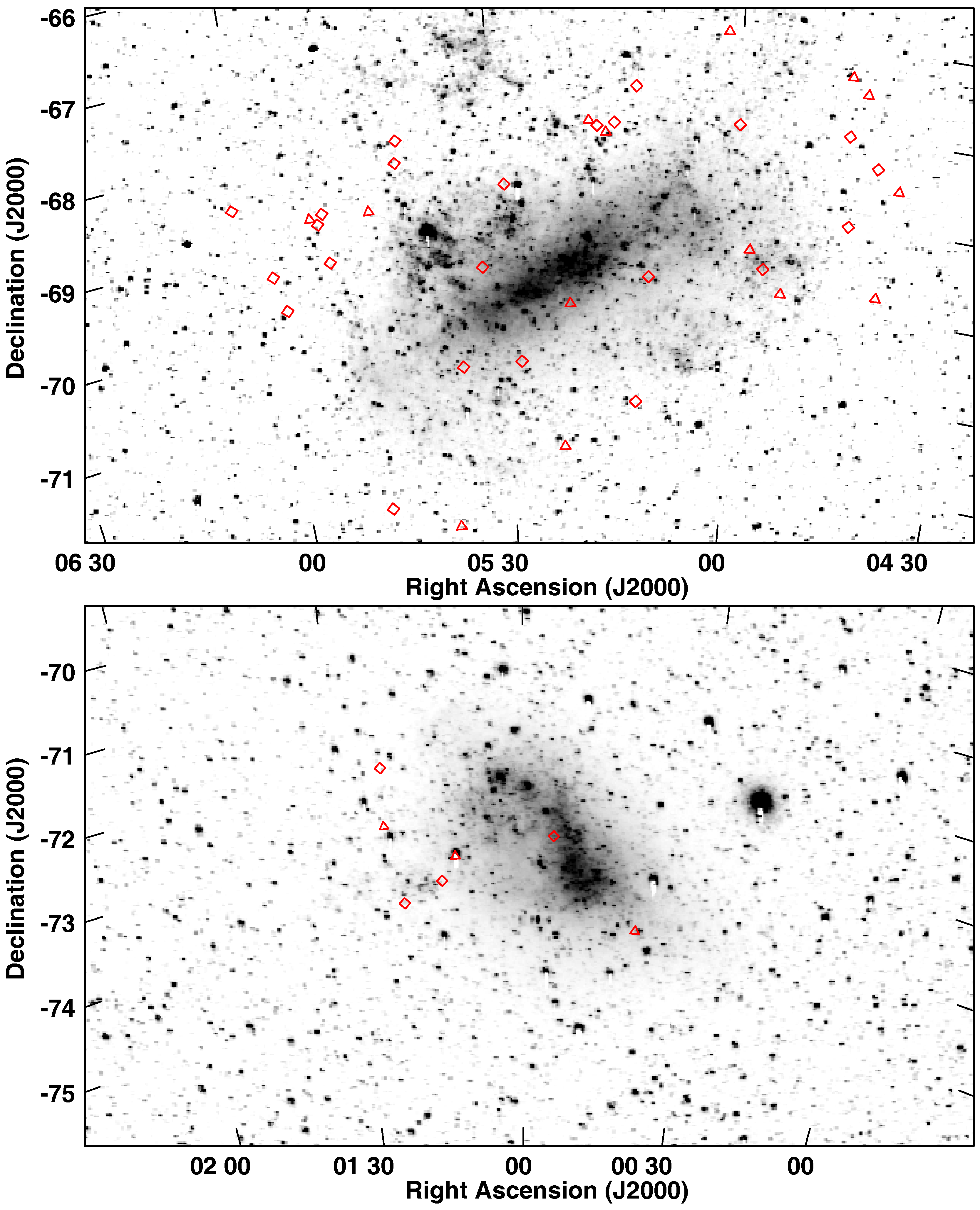