The Mimetic Born-Infeld Gravity: The Primordial Cosmos and Spherically Symmetric Solutions
Next Article in Special Issue

The Jets of Microquasars during Giant Flares and Quiet State

We report on two giant radio flares of the X-ray binary microquasar Cyg X-3, consisting of a Wolf–Rayet star and probably a black hole. The first flare occurred on 13 September 2016, 2000 days after a previous giant flare in February 2011, as the RATAN-600 radio telescope daily monitoring showed. After 200 days on 1 April 2017, we detected a second giant flare. Both flares are characterized by the increase of the fluxes by almost 2000-times (from 5–10 to 17,000 mJy at 4–11 GHz) during 2–7 days, indicating relativistic bulk motions from the central region of the accretion disk around a black hole. The flaring light curves and spectral evolution of the synchrotron radiation indicate the formation of two relativistic collimated jets from the binaries. Both flares occurred when the source went from hypersoft X-ray states to soft ones, i.e. hard fluxes (Swift/BAT 15–50 keV data) dropped to zero, the soft X-ray fluxes (MAXI 2–10 keV data) staying high, and then later, the binary came back to a hard state. Both similar giant flares indicated the unchanged mechanism of the jets’ formation in Cyg X-3, probably in conditions of strong stellar wind and powerful accretion onto a black hole. View Full-Text
Keywords: X-ray binary; black hole; radio emission; relativistic jets X-ray binary; black hole; radio emission; relativistic jets
►▼ Show Figures 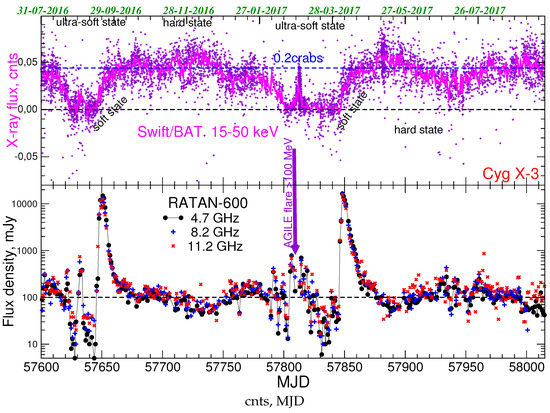