Gamma-ray bursts (GRBs) are the brightest objects in the universe, produced by the deceleration of ultra-relativistic jets with Lorentz factors . The core-collapses of massive stars and the mergers of binary compact stellar objects such as neutron stars and black holes (BHs) are the possible progenitors [1,2]. In both cases accretion onto a compact object is likely to power the relativistic outflow and the same physical processes are involved. The outflow energy is first dissipated by internal shocks (or another form of internal dissipation) which produce highly variable, prompt -rays. Later, the interaction of the outflow with the ambient medium produces a blast wave which expands and produces the subsequent afterglow at lower frequencies (i.e., X-ray, optical and radio) [3,4]. Relativistic motion is an essential ingredient in the GRB model, and understanding the formation process of the outflow (i.e., acceleration and collimation process) is a major focus of international research efforts in the context of GRBs (and other astrophysical jets). GRB outflows are conventionally assumed to be a baryonic jet. However, recent polarization measurements imply that magnetic fields play a role in the jet acceleration [5,6,7,8].
Relativistic outflows and possibly magnetic acceleration are features that GRBs and active galactic nuclei (AGN) have in common. GRB “jets” are bipolar outflow with a opening angle . Unlike other astrophysical jets, GRB jets are transient (i.e., explosive events). The matter and energy are highly concentrated in an extremely thin layer at the forefront of the “jet”. The width of the high density region in the direction of motion is orders of magnitude smaller than the radius where the high density layer is. A “flying pancake” is a better description for GRB jets [3]. Another unique feature of GRB jets is the size of the visible region which is much smaller than the jet opening angle . Due to the relativistic beaming effect, we can see only a small portion of the jet, i.e., deg. The relativistic beaming effect plays an important role when the polarization signals are discussed below.

Although GRBs originate from highly collimated jets, the prompt -rays and early afterglow are well described by a spherical model due to the relativistic beaming. If we are on-axis for the jet and the jet’s Lorentz factor is larger than the inverse of the jet opening angle , the emission from a spherically expanding shell and a jet would be similar to each other. However, as the jet propagates through the ambient medium, the Lorentz factor gradually decreases, and we eventually notice that it is jet emission [9]. When drops below , we begin to see the edge of the jet, and we expect a break in the light curve of the afterglow at this stage (i.e., a jet break). Before the break (and even after the break if the sideway expansion is not significant), the outflow is well described by a relativistic blast wave [10] with an “isotropic” explosion energy E, which is estimated from the prompt -ray luminosity assuming isotropic emission. Using a spherical adiabatic estimate , this break should take place at where is the isotropic energy of the jet in units of ergs and n is the ambient medium particle density in cm. Such a jet break has been observed for many GRB afterglow around days after GRB triggers. The jet opening angle distribution peaks around 5 degree for long GRBs (i.e., the duration is more than 2 s), and it is less constrained for short GRBs ( s) [2].
A large polarization degree usually implies the synchrotron process and some asymmetry in the emission region. Highly polarized emission is expected to be associated with a jet break [11,12,13]. At any point in a shock front, there is a preferred direction (i.e., the radial direction) in which the shock moves. The magnetic field might not be completely isotropic in the shock region, the field strength parallel to the shock plane could be significantly different from that in the plane normal direction [14]. In such a case, We might observe a linearly polarized emission even if the magnetic field is isotropic in the shock plane.
As we have discussed, we can observe only a small portion of a relativistic jet (or the shock front) due to the relativistic beaming effect, which is a small area (i.e., thin disk) around the line-of-sight with angular scale of . First we consider the disk emission in its comoving frame. Even if the magnetic field is isotropic (i.e., totally random) when the disk is seen face-on, there are some degree of alignment and the emission can be highly polarized if the disk is seen edge-on. However, our line-of-sight is supposed to be perpendicular to the disk (i.e., face-on). How can we see the polarized, edge-on emission? This is where the special relativistic effect, i.e., the relativistic aberration of photons plays a role [12]. In the lab frame, the disk is propagating with the Lorentz factor . Photons emitted at (edge-on) in the comoving frame are observed at (almost face-on) in the lab frame. Therefore, the visible region (the disk) is expected to be highly polarized at the edge. However, since the region is symmetric (i.e., disk), the net polarization degree is still zero.
At later times, as the shock slows down, a larger area becomes visible. A jet break in the afterglow light curve is expected when we begin to see the edge of the jet. Since it is unlikely that the observer is directed exactly at the center of the jet, we would see a part of the edge (i.e., arc), rather than the entire, circular edge of the jet at the same time. Most photons come from the direction toward the center of the jet, and the visible region is not symmetric anymore. The net polarization becomes non-zero. If the jet is homogeneous, the light curve of the degree of polarization is expected to have two maxima, with the polarization position angle changing by 90 degree between the first and the second maximum [11,13]. Since GRBs are located at cosmological distances, they are basically point sources. We can not resolve the images of jets. However, the evolution of the polarization degree and polarization angle is known to be sensitive to the angular structure of jets (e.g., energy distribution). Polarization curves will be very important to solve the jet structure [15].

I have briefly reviewed how polarization signals had been discussed in GRB studies. Although we can see only a small portion of GRB jets at early times due to the relativistic beaming effect, as the outflow decelerates, a larger region becomes visible at later times for the observer. When the Lorentz factor becomes comparable to the inverse of the jet opening angle, we expect a peculiar behavior in the evolution of the polarization degree and polarization angle. The exact evolution is sensitive to the angular structure of jets. Polarization curves around jet breaks would be a powerful means to solve the jet structure.
Since the later time afterglow is radiated from a shocked ambient medium (i.e., a blast wave), rather than the original ejecta from the central engine which powers GRB events, it is essential to detect the reverse shock emission (i.e., optical flash) in order to study the energy content of the GRB jets (i.e., magnetized vs baryonic). The forward- and reverse- shock modeling of afterglow and polarization measurements of early afterglow both indicate magnetized outflow. Magnetic fields are very likely to play a significant role in the GRB jet formation.
Recently, circularly polarized signals were detected in the optical afterglow of GRB 121024A. The circular polarization degree itself and the ratio between the circular and linear polarization degree are much higher than the theoretically expected values. Additional observations would be needed to understand the origin of the circular polarization.
Binary compact stellar objects are leading candidates for short GRB progenitors, they are also the primary targets for gravitational wave observatory such as LIGO and Virgo. Various electromagnetic (EM) signals should be associated with these GW events [33,34]. Measuring the degree of polarization of the electromagnetic emission provides unique constraints on the geometry of the system (the polarization of GWs also might provide constraints on the geometry in future [35]).

This publication has received funding from the European Union’s Horizon 2020 research and innovation programme under grant agreement No 730562 [RadioNet]. This work is is supported by a STFC grant. 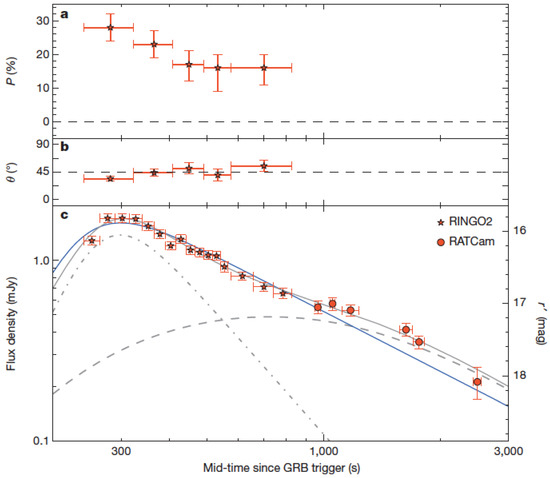