Modified Newtonian Gravity as an Alternative to the Dark Matter Hypothesis

[-5]The applications of Newtonian dynamics in galactic scales have shown that the inverse square law is incompatible with the amount of visible mass in the form of stars and molecular clouds. This manifests as the rotational curves of galaxies being asymptotically flat instead of decaying with the distance to the center of the galaxy. In the context of Newtonian gravity, the standard explanation requires a huge amount of dark mass in the form of hypothetical particles that still remain undetected. A different theory was provided as a modification of Newtonian dynamics (MOND) at low accelerations . This MOND theory still has many supporters and it can easily explain some features of the rotation curves, such as the Tully–Fisher (TF) phenomenological relation between luminosity and velocity. In this paper, we revisit the third approach of a non-Newtonian force, that has resurfaced from time to time, in order to reconcile it with a finite apparent dark mass and the TF relation. View Full-Text
Keywords: dark matter; galactic rotation curves; modified theories of gravity; Tully–Fisher relation dark matter; galactic rotation curves; modified theories of gravity; Tully–Fisher relation
►▼ Show Figures 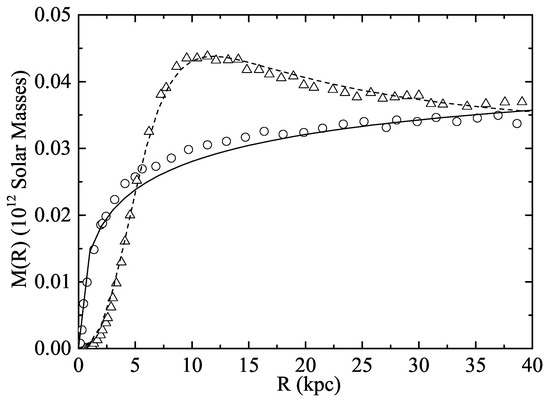