Relativistic jets are collimated plasma outflows associated with active galactic nuclei (AGN), gamma-ray bursts (GRBs), stellar-mass black holes, and pulsars (e.g., [1]). Among these astrophysical systems, blazars and GRB jets produce the most luminous phenomena in the universe (e.g., [2]). Despite extensive observational and theoretical investigations, including simulation studies, our understanding of their formation, interaction and evolution in ambient plasma, and consequently their observable properties, such as time-dependent flux and polarity (e.g., [3]), remains rather limited.
Astrophysical jets are ubiquitous in the universe and involve many essential/basic plasma phenomena, such as interaction with the interstellar medium, the generation of magnetic fields, turbulence, reconnection, and particle acceleration. Many of the processes that determine the behavior of large-scale relativistic jets are very complex, involving plasma physics and often coupling global, large-scale dynamics to microscopic processes that occur on short spatial and temporal scales associated with plasma kinetic effects. We carried out kinetic plasma simulations using our relativistic particle-in-cell (RPIC) code with the intent to advance our knowledge of global relativistic jets with helical magnetic fields and associated phenomena, such as particle acceleration, kinetic reconnection, and turbulence, which cannot be investigated with fluid models (i.e., relativistic magnetohydrodynamic (RMHD) simulations).
Recently, we performed global jet simulations involving the injection of a cylindrical non-magnetized jet into an ambient plasma in order to investigate shock (Weibel instability), and velocity shear instabilities (kKHI and mushroom instability (MI)) simultaneously [4]. In this paper, we describe the preliminary results of this study of global relativistic jets containing helical magnetic fields.

As an initial step, we examined how the helical magnetic field modifies the jet evolution using a small system before performing larger-scale simulations. A schematic of the simulation injection setup is given in our previous work [5]. In these small-system simulations, we utilized a numerical grid with (L: simulation system length; simulation cell size: ) and periodic boundary conditions in transverse directions with a jet radius . The jet and ambient (electron) plasma density measured in the simulation frame were and , respectively. This set of densities of jet and ambient plasmas was used in our previous simulations [4,5,6].
In the simulations, the electron skin depth was , where c is the speed of light, is the electron plasma frequency, and the electron Debye length for the ambient electrons was . The jet-electron thermal velocity was in the jet reference frame. The electron thermal velocity in the ambient plasma was , and the ion thermal velocities were smaller by . The simulations were performed using an electron–positron () plasma or an electron–proton (– with ) plasma for the jet Lorentz factor of 15 and with the ambient plasma at rest ().
In the simulations, we used the initial magnetic field amplitude parameter (), the magnetization parameter defined as the ratio between the electromagnetic field (EMF) energy flux to the plasma matter energy flux , and the characteristic magnetic radius of . The helical field structure inside the jet was defined by Equations (1) and (2). For the external magnetic fields, we used a damping function that multiplies Equations (1) and (2) with the tapering parameter . The final profiles of the helical magnetic field components were similar to those of the case in which the jet radius was ; the only difference was that .
In this report, we maintain all the simulation parameters as described above, except the jet radius and simulation size (adjusted on the basis of the jet radius). We performed simulations with larger jet radii of . In these small-system simulations, we utilized a numerical grid with (simulation cell size: ). The cylindrical jet with jet radii of was injected in the middle of the y–z plane (, respectively) at . The largest jet radius () was larger than that in [4] (), but the simulation length was much shorter ().
Figure 1 shows the y-component of the magnetic field () in the jet radius with . The initial helical magnetic field (left-handed; clockwise viewed from the jet front) was enhanced and disrupted as a result of the instabilities for both cases.
Even for shorter simulation systems, the growing instabilities were affected by the helical magnetic fields. These complicated patterns of are generated by currents created by instabilities in jets. A larger jet radius provokes the growth of more modes of instabilities within jets, which make the jet structures more complicated. The simple recollimation shock generated in the small jet radius is shown in Figure 1a,b [5]. We need to perform longer simulations in order to investigate the full development of instabilities for jets with helical magnetic fields.
In order to investigate 3D structures of the averaged jet electron current (), we plotted it in the 3D (, , ) region of the jet front.
Figure 2 shows the current () of jet electrons for – (a) and (b) jets. The cross-sections at and the surfaces of jets show complicated patterns, which are generated by instabilities with the magnetic field lines.
In order to determine the particle acceleration, we calculated the Lorentz factor of jet electrons in the cases with , as shown in Figure 3. These patterns of the Lorentz factor coincided with the changing directions of local magnetic fields that were generated by instabilities. The directions of the magnetic fields are indicated by the arrows (black spots), which can be seen with magnification. The directions of the magnetic fields were determined by the generated instabilities. The structures at the edge of the jets were generated by the kKHI. The plots of the x-component of the current in the y–z plane show the MI in the circular edge of the jets, as shown in Figure S1.
In order to investigate 3D structures of the averaged jet-electron Lorentz factor, we plotted its iso-surface (, ) of a quadrant of the jet front in 3D.
Figure 4 shows the Lorentz factor of jet electrons for – (a) and (b) jets. The cross-sections and surfaces of the jets show complicated patterns that were generated by instabilities with the magnetic field lines.
In both cases with the jet radii larger than , the kKHI and MI were generated at the jet surfaces, and inside the jets, the Weibel instability was generated with kink-like instability, in particular in the electron–proton jet. We aim to investigate this further using different parameters, including a, which determines the structure of helical magnetic fields in Equations (1) and (2).

The global jet simulations with large jet radii have shown the importance of a larger jet radius in RPIC simulations for in-tandem investigation of the macroscopic processes incorporated in RMHD simulations. As a result of mixed modes of generated instabilities, jet electrons in phase space show little or no bunching in comparison to those with a jet radius of , as shown in Figure 5a,b in a previous report [5]. Consequently, recollimation shocks occur rather in the center of jets, and this is dependent on the value of a in Equations (1) and (2). Further simulations with different values of a are required for investigating the evolution of kinetic instabilities in global jets.
These simulations show that the energy stored in helical magnetic fields is released as a result of the excitations of kinetic instabilities such as the kKHI, MI, and the Weibel instability with kink-like instability. Consequently, electrons are accelerated and turbulent magnetic fields are generated, which provide polarity.
MacDonald & Marscher [3] developed a radiative transfer scheme that allows the Turbulent Extreme Multi-Zone (TEMZ) code to produce simulated images of the time-dependent linearly and circularly polarized intensity at different radio frequencies. Using this technique with our simulation results, we have produced synthetic polarized emission maps that highlight the linear and circular polarization expected within the model. We will discuss these findings in a separate paper.
We plan to perform additional simulations using a larger jet radius and longer systems in order to investigate the full dynamics of jet evolution and interaction with ambient mediums through developing instabilities.

The following are available online at www.mdpi.com/2075-4434/5/4/58/s1. Figure S1: Panels show iso-surface plots of the x component of current in the plane for – (a) and (b) jet with at at time . For the (b) jet the patters of rings are generated outside of the jet by the kKHI. The arrows show the magnetic field strength in the plane.

This work was supported by NSF AST-0908010, AST-0908040, NASA-NNX09AD16G, NNX12AH06G, NNX13AP-21G, and NNX13AP14G grants. The work of J.N. and O.K. has been supported by Narodowe Centrum Nauki through research project DEC-2013/10/E/ST9/00662. Y.M. is supported by the ERC Synergy Grant “BlackHoleCam—Imaging the Event Horizon of Black Holes” (Grant No. 610058). M.P. acknowledges support through grant PO 1508/1-2 of the Deutsche Forschungsgemeinschaft. Simulations were performed using the Pleiades and Endeavor facilities at NASA Advanced Supercomputing (NAS), using Gordon and Comet at The San Diego Supercomputer Center (SDSC), and using Stampede at the Texas Advanced Computing Center, which are supported by the NSF. This research was started during the program “Chirps, Mergers and Explosions: The Final Moments of Coalescing Compact Binaries” at the Kavli Institute for Theoretical Physics, which is supported by the National Science Foundation under Grant No. PHY05-51164. The first velocity shear results using an electron–positron plasma were obtained during the Summer Aspen workshop “Astrophysical Mechanisms of Particle Acceleration and Escape from the Accelerators” held at the Aspen Center for Physics (September 1–15, 2013). 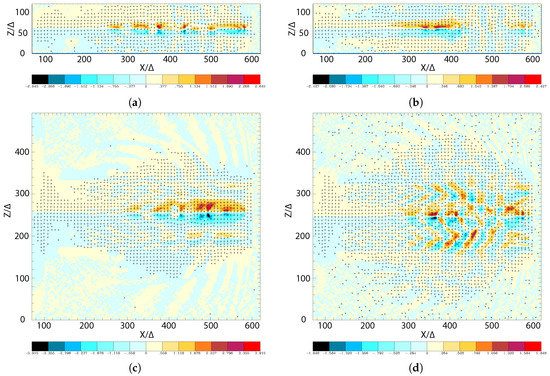