Pregnancy, childbirth, and postpartum are periods in which a woman’s risk of developing a mental disorder increases; despite this, mental health is an aspect that does not usually receive a lot of attention in the care provided during these periods [1,2].
Postpartum post-traumatic stress disorder (PTSD) is one of these disorders and may be present in 0.8–43% of women, depending on whether the assessment uses only self-declared symptoms, the diagnostic criteria of the DSM, or if the study has been carried out at a community level or in the at-risk population [3,4,5,6,7,8].
Women who experience this disorder report re-experimentation of the event, a feeling of disconnection from the baby, absence of reality, nightmares, irritability, rejection of new motherhood, or may even develop tocophobia (the fear of pregnancy and childbirth) [9,10,11,12,13,14].
The maximum expression of these symptoms appears between 4–6 weeks postpartum, although the symptoms can remain for months or years later, and even in future pregnancies [3,15].
Different variables have been associated with the risk of developing PTSD, such as having been abused during childhood [16], exposure to trauma [17], the type of delivery, the Kristeller maneuver being performed in the expulsive period, having third or fourth-degree perineal tears [18], having a postpartum hemorrhage [19], or being afraid of childbirth [20]. In addition, age, parity, and having resources, such as coping skills, have also been associated with the incidence of PTSD [21,22].
Postpartum PTSD affects maternal morbidity [11,14] It can also affect the couple, the familial environment, the family, and, especially, the baby [12,23,24] It has also been associated with a lower rate of breastfeeding initiation [24] and a higher incidence of low birth weight [4].
In the care that women receive during childbirth, they may experience obstetric violence, also called incorrect or inappropriate treatment [25], either physically or emotionally with inadequate clinical care or with violation of the principle of autonomy [26]. In some countries, a frequency of 35.4% has been reported for physical, verbal, or discrimination abuse [27], reaching 91.7% in some studies for abuse and lack of respect [28]. In other countries such as Spain, the prevalence of obstetric violence is around 67% [29]. Due to this, the World Health Organization (WHO) has carried out a strategy aimed at health professionals to alert them on this issue [30].
Obstetric violence and the incidence of PSTD have been studied by several authors [31,32]. In a meta-analysis with 50 studies, it was suggested that a negative experience during delivery was a risk factor for the appearance of PTSD, prompted, among other reasons, by lack of support or type of delivery, i.e., whether it was instrumental or caesarean [31]. In addition, subjective distress generated by experiences during childbirth appears to be an important predictor for the development of PTSD and was the main risk factor in the 31 studies analyzed in a systematic review carried out in 2012 [32].
Establishing a possible association between experiencing obstetric violence and the incidence of PTSD will help sensitize health professionals who provide care during pregnancy, childbirth, and the postpartum period; promoting strategies with correct and evidence-based clinical practices and reducing the medicalization of the natural childbirth process [33]. In this way, the incidence of PTSD and its resulting consequences for maternal and newborn health could be reduced [11,12,34]. Therefore, the present study intended to determine if there is an association between experiencing obstetric violence and the risk of PTSD.

A cross-sectional study was conducted with women who had given birth in Spain. The inclusion criteria were postpartum women whose delivery had been in the last 12 months, and who were of legal age. The only exclusion criteria were not being able to understand the Spanish language, and that a minimum of one month had not elapsed since the date of birth. Data collection was carried out from September to December 2019. This study received the approval of the Research Ethics Committee of the province of Jaen with reference number TD-VCDEPP-2019/1417-N-19. All women were required to read the study information and then give their digital consent by checking a box, including the fact that participation was entirely voluntary with anonymity guaranteed.
For calculating the sample size, the maximum modelling criterion was used where 10 events (women at risk of PTSD) are included for each independent variable to be introduced in the multivariate model [35]. Considering the prevalence of PTSD risk was 10% in previous studies in Spain [36], 80 women at risk of PTSD would be needed to include eight variables and a minimum of 800 women included in the study.

Data was collected using a previously piloted online questionnaire that we had constructed for this purpose. The questionnaire collected information on sociodemographic variables, clinical variables, and variables related to the woman’s experience with childbirth care, among other information.
The main independent variable was obstetric violence and its three components, verbal, physical, and psycho-affective. A questionnaire was used to determine its occurrence by asking about various practices and situations that the woman had experienced during her labor process. (Annex 1. Obstetric violence questionnaire).
The main outcome variable was the risk of PTSD, which was assessed using the Perinatal Post-traumatic Stress Disorder Questionnaire (PPQ) [37]. The PPQ consists of 14 questions with Likert-type answers with scores ranging from 0 to 56 points. A high risk of PTSD score was considered as a score of 19 points or higher.
The dissemination of the questionnaire was carried out thanks to the collaboration of the different associations of Spanish midwives who distributed the questionnaire among the women to whom they provided their care.

First, descriptive statistics were performed using absolute and relative frequencies for categorical variables and mean with standard deviation for quantitative variables. Next, a bivariate analysis was performed between the sociodemographic, clinical, and obstetric violence variables and the risk of PTSD (dichotomized as low risk/high risk). Crude (OR) and adjusted (aOR) odds ratios were estimated with corresponding 95% confidence intervals, utilizing a bivariate and multivariate analysis with binary logistic regression, respectively. For the multivariate analysis, the SPSS backward step procedure was used.

There are clinical practices that are related to the risk of PTSD, including the type of delivery a woman has, formula-fed newborn at hospital discharge, mother-child separation, her birth plan not being respected, and verbal and psycho-affective obstetric violence. Partner support and initiation of breastfeeding in the first hour were identified as protective factors against PTSD. Practices such as breastfeeding or feeling supported during the birthing process can provide resources for women to empower themselves and cope with a possible risk of postpartum post-traumatic stress disorder, and prevent its onset. Professionals need to be sensitized to this topic since the treatment and care they provide to women can influence the probability of developing PTSD.

This study was approved by the Clinical Research Ethics Committee of Universidad de Jaen (reference number TD-VCDEPP-2019/1417-N-19). Before starting the questionnaire, the participants read a fact sheet about the study, its objectives, etc., and marked a box by which they showed their consent to participate in it, i.e., they signed an online informed consent (ticking the option if they wanted to participate or not doing so when refusing to take part in the study). We followed the protocols established to carry out this type of research with the purpose of publication/disclosure to the scientific community. The study was conducted according to the strobe guidelines set in the Declaration of Helsinki and all procedures involving human subjects were approved by the Ethics Committee. All women involved in this study filled out informed consent and data treatment forms to enter the study, in accordance with the ethical standards of the Ethics Committee. All participants received written information on the study, including the fact that participation was entirely voluntary with anonymity guaranteed.

The datasets generated and/or analyzed during the current study are available from the corresponding author on reasonable request.

The authors declare no competing interests. No conflict of interest has been declared by the authors. This research received no specific grant from any funding agency in the public, commercial, or not-for-profit sectors. 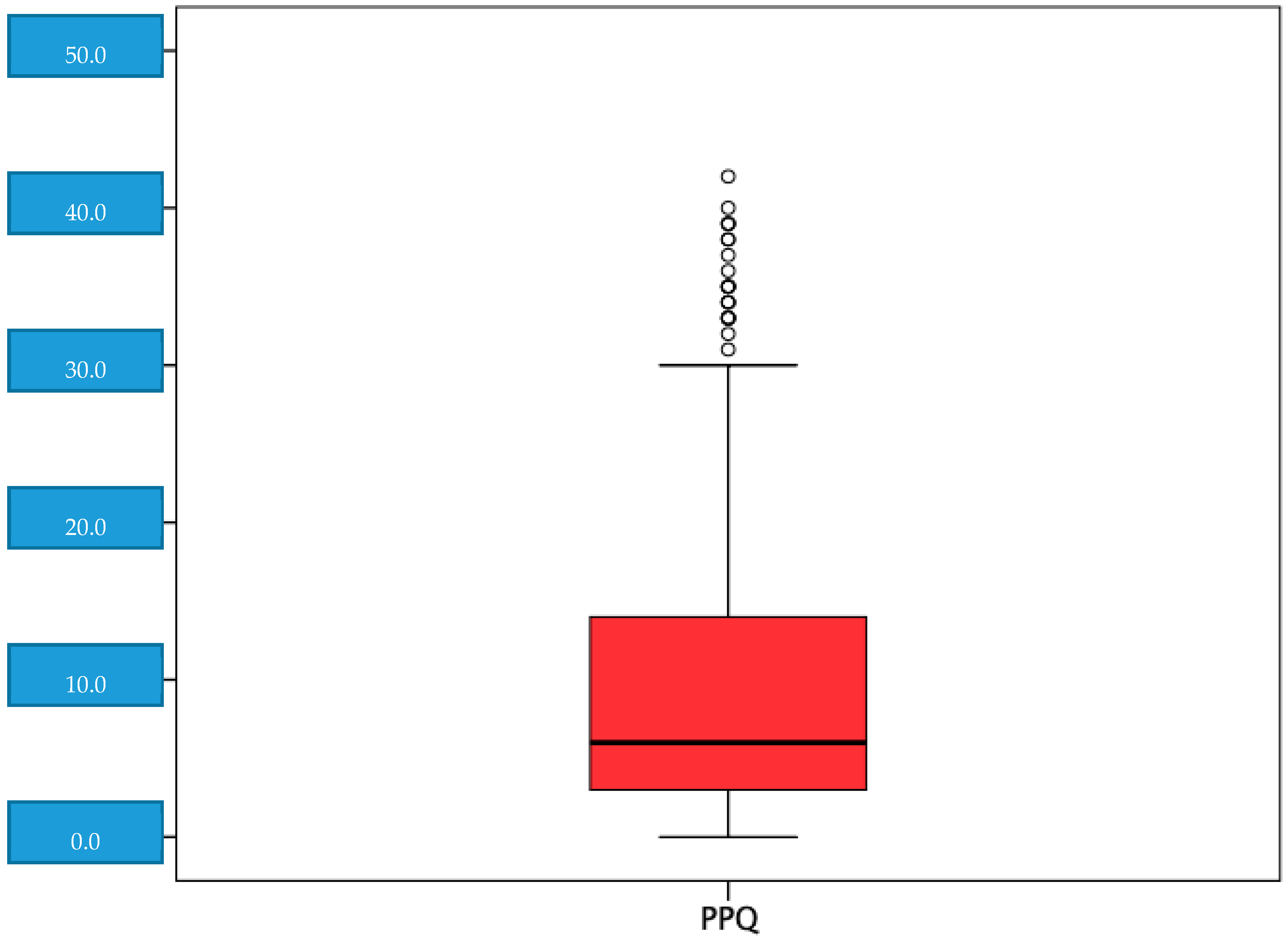