Impact of Single-Nucleotide Polymorphisms of CTLA-4, CD80 and CD86 on the Effectiveness of Abatacept in Patients with Rheumatoid Arthritis

Abatacept (ABA) is used as a first-line treatment in patients diagnosed with moderate and severe rheumatoid arthritis (RA). The interindividual response to ABA therapy is very variable in these patients. The objective of our study was therefore to investigate the role of polymorphisms of the CTLA-4, CD80 and CD86 genes, as well as that of clinical factors of the disease, in the response to ABA in patients with RA. A retrospective cohort study was carried out in 109 patients receiving treatment with ABA and diagnosed with RA. The genetic variables were analyzed using real-time PCR with TaqMan® probes. The patients were classified according to the European League Against Rheumatism (EULAR) criteria at 6 and 12 months from start of treatment. The independent variables associated with higher EULAR response were lower duration of previous biologic disease-modifying anti-rheumatic drugs and lower baseline values of the disease activity score 28 after 6 months of ABA treatment; and lower baseline patient’s visual analogue scale (PVAS) after 12 months. In addition, a significant association was found between duration of ABA treatment, non-administration of concomitant glucocorticoids and lower baseline values of the number of inflamed joints and erythrocyte sedimentation rate clinical variables, with remission of the disease after 6 months’ treatment with ABA. Finally, remission of the disease after 12 months’ treatment with ABA was associated with earlier age at start of ABA therapy and lower number of previous biologic therapies (BTs). The CTLA-4rs5742909-T allele and the CTLA-4rs231775-G allele were found to be associated with satisfactory EULAR response and low disease activity (LDA) after 12 months’ treatment with ABA (CTLA-4rs5742909 T vs. CC; OR = 5.88; CI95% = 1.48–23.29 and OR = 4.75; CI95% = 1.35–17.94, respectively, and CTLA-4rs231775 G vs. AA, OR = 3.48; CI95% = 1.20–10.09 and OR = 4.68; CI95% = 1.49–17.94, respectively). In conclusion, patients with RA treated with ABA showed better EULAR response and LDA rate when they had the CTLA-4 rs5742909-T or CTLA-4 rs231775-G polymorphisms; furthermore, this remission rate increased in patients that began ABA treatment earlier, those with a lower number of previous BTs and those with a lower PVAS value. View Full-Text
Keywords: rheumatoid arthritis; abatacept; CTLA4; effectiveness; polymorphisms rheumatoid arthritis; abatacept; CTLA4; effectiveness; polymorphisms
►▼ Show Figures 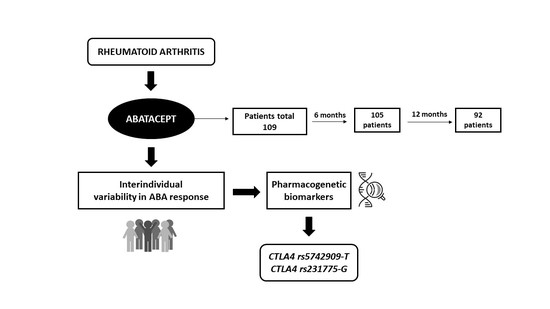