Inhaled Xenon Washout as a Biomarker of Alzheimer’s Disease

Biomarkers have the potential to aid in the study of Alzheimer’s disease (AD); unfortunately, AD biomarker values often have a high degree of overlap between healthy and AD individuals. This study investigates the potential utility of a series of novel AD biomarkers, the sixty second 129Xe retention time, and the xenon washout parameter, based on the washout of hyperpolarized 129Xe from the brain of AD participants following inhalation. The xenon washout parameter is influenced by cerebral perfusion, T1 relaxation of xenon, and the xenon partition coefficient, all factors influenced by AD. Participants with AD (n = 4) and healthy volunteers (n = 4) were imaged using hyperpolarized 129Xe magnetic resonance imaging (MRI) and magnetic resonance spectroscopy (MRS) to determine the amount of retained xenon in the brain. At 60 s after the breath hold, AD patients retained significantly higher amounts of 129Xe compared to healthy controls. Data was fit to a pharmacokinetic model and the xenon washout parameter was extracted. Xenon washout in white and grey matter occurs at a slower rate in Alzheimer’s participants (129Xe half-life time of 42 s and 43 s, respectively) relative to controls (20 s and 16 s, respectively). Following larger scale clinical trials for validation, the xenon washout parameter has the potential to become a useful biomarker for the support of AD diagnosis. View Full-Text
Keywords: hyperpolarized gas MRI; xenon; gas retention; Alzheimer’s disease; wash out; vascular hyperpolarized gas MRI; xenon; gas retention; Alzheimer’s disease; wash out; vascular
►▼ Show Figures 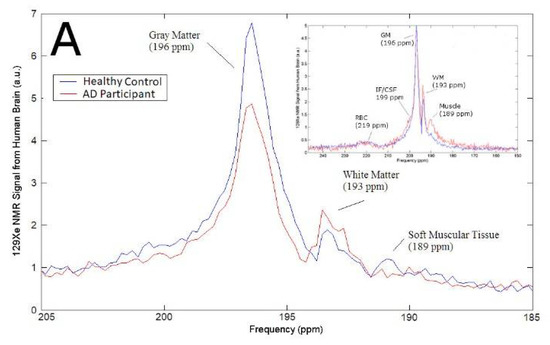