Clinical Characteristics, Treatment Modalities, and Potential Contributing and Prognostic Factors in Patients with Bone Metastases from Gynecological Cancers: A Systematic Review
Next Article in Special Issue

Porphyrias in the Age of Targeted Therapies
Previous Article in Journal

Acute Intermittent Porphyria (AIP) is the most common and severe form of acute hepatic porphyria (AHP), which is a heterogeneous group of hereditary metabolic disorders characterized by defects of heme biosynthesis. Clinical manifestations include acute neurovisceral attacks (abdominal pain, nausea, constipation, vomiting) occurring in response to precipitating factors (i.e., fasting), which have in common the increased demand of hepatic heme production. Heme exerts negative feedback on the first rate-limiting enzyme of biosynthetic pathway, the 5-aminolaevulinic acid (ALA) synthase 1 (ALAS1) [1,2,3,4]. Loss of regulatory heme pool causes the upregulation of ALAS1 together with the overproduction of heme precursors as ALA and porphobilinogen (PBG), which play a key role in neurotoxicity [5,6,7].
Causative mutations of AIP affect the Hydroxymethylbilane Synthase (HMBS) gene, encoding the PBG deaminase (PBGD) enzyme, and their prevalence is relatively high in the general population (≈1/1700 subjects). Notwithstanding, the clinical penetrance hovers just around 0.5–1% of AIP carriers [8], and the genetic mutations (more than 400) identified in the HMBS gene are not sufficient to account for the phenotypic variability. Indeed, over 90% of AIP subjects, some of whom are highly excreters of both ALA and PBG, remain asymptomatic throughout their life, suggesting that the pathophysiology of acute events may not be directly triggered by the accumulation of the neurotoxic by-products.
Alterations of glucose metabolism and mitochondrial bioenergetics have been described in AIP experimental models, but their role in precipitating the AIP symptomatology has not been demonstrated yet. Impaired glucose tolerance and low glucose availability were observed in AIP murine models exposed to porphyrinogen drugs inducing the acute attack [9,10]. Collantes et al. revealed that AIP mice aberrantly responded to caloric restriction by stimulating gluconeogenesis and ketogenesis rather than glycogenolysis in the liver [10]. PBGD-deficient rodents showed NADH, FADH2, and succinyl-CoA shortage, which is the primary sources for the electron flux of the respiratory chain and heme synthesis, respectively [10,11]. Furthermore, hepatic transcriptome of AIP mice revealed that the majority of differentially expressed genes during a stress-induced attack were involved in the circadian rhythm, mitochondrial biogenesis, and oxidative phosphorylation (OXPHOS), whose regulation closely depends on peroxisome proliferator-activated receptor gamma coactivator 1-alpha (PPARGC1A, encoding the PGC1-α transcription factor) [12].
Intravenous hemin administration represents the first-line therapy in AIP patients to manage severe episodes, even if its chronic infusion was associated with the occurrence of debilitating attacks [13]. Recently, ALAS1-directed small interfering RNA (Givorisan) was introduced for AIP treatment in subjects with recurrent attacks, although its efficacy was paralleled by increased hepatic and renal adverse complications [14]. In sum, the current standards of care are mostly addressed to reduce hepatic ALAS1 activity, although they may present several shortcomings [15].
Foregoing studies have highlighted that AIP is featured by an impaired glucose metabolism in experimental models to the extent that carbohydrate loading has been proposed as alternative strategy in patients with mild attacks. Moreover, AIP patients showed a higher prevalence of hyperinsulinemia and insulin resistance (IR) compared to control volunteers including family members without HMBS mutations and porphyrin accumulation [16,17], thereby opening new perspectives for the development of novel medical care aiming to improve insulin sensitivity. Consistently, a liver-targeted insulin therapy in AIP mice promoted ALAS1 downregulation and improved glucose metabolism [16]. Therefore, this study aimed to reproduce in vitro a condition that parallels human AIP by silencing PBGD mRNA in human HepG2 hepatoma cells and investigating metabolic alterations occurring at baseline and during a stressful factor (fasting), pointing to an in-depth characterization of glucose metabolism and mitochondrial turnover. Furthermore, in the attempt to offer a novel therapeutic option for the AIP prophylaxis, we assessed the potential efficacy of a nutraceutical supplement, the insulin mimic alpha-lipoic acid (α-LA), which has been already tested for the treatment of metabolic disorders such as type 2 diabetes, turning out to be effective and safe at improving glucose handling, insulin sensitivity, and hepatic inflammation [18,19,20].

siPBGD and scramble cells were lysed in 0.1 M Tris-HCl buffer (pH 8.0) containing 0.2% Triton-X 100. Then, 50 µL cell lysates were incubated with 200 µL 0.1 M Tris-HCl and 25 µL of 1 mM PBG for 1 h at 37 °C in order to evaluate whether PBGD enzymes could convert PBG substrate into uroporphyrin, according to the procedure of Hsiao et al. [21]. After incubation, the enzymatic reaction was stopped through 10% trichloroacetic acid and centrifuged at 13,000 rpm for 10 min. The uroporphyrin fluorescence emission (Ex/Em = 405/655 nm) was measured by a spectrofluorometer (Shimadzu Corporation, Kyoto, Japan), and uroporphyrin concentration was determined using uroporphyrin I standard calibrator (Sigma-Aldrich, St. Louis, MO, USA). The PBGD activity (pmol Uro/h) was normalized to the total amount of proteins (mg) and expressed as percentage of residual activity for each condition.

The authors declare no competing interest. 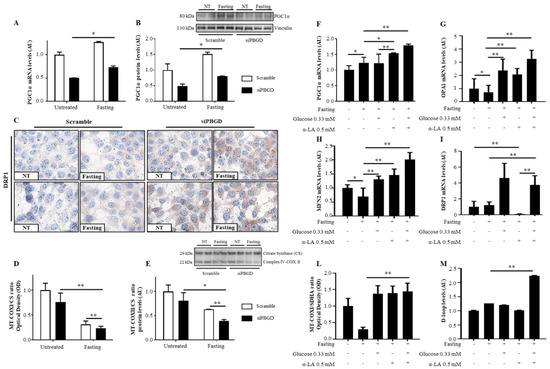