Predicting Long-Term Mortality in Patients with Angina across the Spectrum of Dysglycemia: A Machine Learning Approach
Next Article in Special Issue

Artificial Intelligence in Differential Diagnostics of Meningitis: A Nationwide Study

:
The aim of this study was to present the epidemiology of invasive diseases caused by Neisseria meningitidis and Streptococcus pneumoniae in the pre-vaccine period, and Haemophilus influenzae in the post-vaccine period in a pediatric population from Serbia. Among the meningococci, serogroup B dominated (83%), followed by serogroup C (11.3%). High antigenic diversity was found, with fine type P1.5-1,10-4 being the most frequent. Moderate susceptibility to penicillin was common (55%). Within pneumococci, serotypes 19F, 14, 6B, 6A, 18C, 23F, 3, and 7F prevailed, while 19A was rare (3.6%). The coverages of PCV10 and PCV13 were 68% and 84%, respectively. Major sequence types were ST320, ST15, ST273, ST271, and ST81. Non-susceptibility to penicillin (66.7%), cefotaxime (37%), and macrolides (55%) was predominantly detected in vaccine-related serotypes. Among the 11 invasive H. influenzae isolates collected, there were six Hib, three non-type b, and two non-typeable strains (ntHi) that were antibiotic susceptible. These results imply a potential benefit of future Men-B vaccine implementations. For pneumococci, as PCV10 was recently introduced, a significant reduction of morbidity and antibiotic resistance might be expected. The efficiency of Hib vaccination is evident, but a shift towards non-type b and ntHi strains may be anticipated.
Keywords:
Neisseria meningitidis; Streptococcus pneumoniae; Haemophilus influenzae; invasive diseases; seroepidemiology; molecular epidemiology; conjugate vaccines

Neisseria meningitidis, Streptococcus pneumoniae, and Haemophilus influenzae are important human pathogens causing invasive life-threatening infections that are a major cause of morbidity and mortality in childhood. Variations in the chemical composition of capsular layers of these bacteria lead to immunologically diverse types. Meningococci are grouped within 12 serogroups, with the majority of invasive infections caused by strains belonging to A, B, C, Y, W-135, and X serogroups. In pneumococcus, more than 90 capsular serotypes have been described and serogroups 1, 6, 14, 19, and 23 were among the most common causes of bacteriaemia, sepsis, meningitis, and other invasive pneumococcal diseases (IPD) in children [1]. Regarding H. influenzae, significant invasive potential is related primarily to capsular type b (Hib).
Epidemiology of meningococcus, pneumococcus, and H. influenzae varies significantly between countries and regions. Serotypes/serogroups differ in invasive potential, propensity towards specific disease, antibiotic resistance profiles, geographic and temporal distribution, between age groups, etc. [1,2]. However, their distribution has been most profoundly affected by the availability of vaccines, especially conjugate vaccines used in wide-scale immunization programs for children that are a principal reservoir of these pathogens in the population [3,4,5]. The conjugate Hib vaccine was first developed in the late 1980s, followed by conjugate pneumococcal and meningococcal vaccines introduced in the late 1990s and early 2000s [3,6,7]. For pneumococci, there are two currently used pneumococcal conjugate vaccines (PCV), 10-valent (PCV10) and 13-valent (PCV13, which replaced the 7-valent vaccine, PCV7) that target the serotypes most frequently encountered in invasive infections, as well as the serotypes exhibiting antimicrobial resistance [7]. Different formulations of meningococcal conjugate vaccines against A, C, Y, and W135 serogroups are available, while a recombinant vaccine for B group has recently been developed [6,8]. Many countries have introduced some of these vaccines into their immunization programs, which resulted in a marked reduction in the incidence of invasive diseases caused by vaccine-related serotypes/serogroups (e.g., >90% for Hib) [3,4,5]. Moreover, a significant change in serotypes/serogroups of meningococcus, pneumococcus, and H. influenzae causing invasive diseases, a phenomenon referred to as “serotype replacement”, has been observed after the use of conjugate vaccines in many populations [9,10,11].
In Serbia, the Hib vaccine was implemented in 2006 with vaccine coverage that exceeded 95%. For meningococci, no vaccine is routinely applied, however, since 2016 a quadrivalent conjugated vaccine for the prevention of A, C, Y, and W-135 serogroup-related infections has been recommended for use in high-risk individuals only (≥2 years old), but the recommendation has recently been changed to include children 9 through 23 months of age. PCVs have been available since 2009, but the coverage rate was low until April 2018, when PCV10 was introduced into the National Child Immunization Program. Regarding the surveillance of invasive diseases in Serbia, despite invasive meningococcal, pneumococcal, and H. influenzae related diseases being listed among the notifiable diseases, the existing epidemiological data are vague, due to under-reporting and overlapping diagnoses. According to the data collected by the National Institute of Public Health of Serbia, the reported incidence of bacterial meningitis in the past 5 years varied between 1.5 and 2.3/100,000 with missing data on the causative agents (http://www.batut.org.rs/index.php?category_id=140, accessed on 28 April 2021). Information on serotype/serogroup distribution for these pathogens is also scarce, and no comprehensive study on a broader scale has been done so far. For meningococci, the predominance of serogroup B has been reported [12], while existing data for pneumococci imply that circulating serotypes in some regions are similar to those observed in other countries before the introduction of PCVs and that antibiotic resistance might be significant in some serotypes [13,14,15,16]. However, none of the studies performed thus far addressed the distribution of serogroup/serotypes and antimicrobial resistance in invasive meningococcal and pneumococcal isolates at the country level, while information regarding H. influenzae is completely lacking.
Therefore, the aim of this study was to assess the serogroup/serotype epidemiology of invasive diseases caused by meningococcus and pneumococcus prior to the introduction of conjugate vaccines and to evaluate the impact of the Hib vaccine on serotype distribution of H. influenzae in Serbia. To this end, laboratory-based surveillance data from the National Reference Laboratory (NRL) for Meningococcus and Haemophilus and NRL for Streptococci were used to present serogroup/serotype distribution, antimicrobial resistance, and characteristics of invasive meningococcal, pneumococcal, and H. influenzae isolates from a child population in Serbia. The obtained results might provide valuable information for the evaluation of the present vaccination programs and the basis for the implementation of new vaccines in the future in this region.

3.1. Clinical and Demographic Data and Characterization of Bacterial Isolates

Within meningococcal isolates, serogroup B dominated, since as many as 44 isolates out of 53 belonged to this group (83%). Six isolates were of serogroup C (11.3%), while serogroups W135 and Y were only found in two (3.8%) and one isolate (1.9%), respectively. Among 138 pneumococcal isolates, 25 different serotypes were found (Figure 1). Eight most frequent serotypes (19F, 14, 6B, 6A, 18C, 23F, 3, and 7F), represented by at least six isolates each, encompassed more than 75% of all invasive strains. Apart from the youngest age group (0 to 6 m) with a rather small number of isolates, serotypes 19F and 14 dominated in all other age groups causing 37.9%, 41.3%, and 30.4% of IPD in children 6 m to 2 y, 2 to 5 y and 5 to 18 y of age, respectively. Three serotypes (14, 19F, and 18C) accounted for 43% of meningitis cases, while 47% of sepsis cases (including occult bacteremia) were related to serotypes 19F, 14, and 6B. Nevertheless, the association of any of the predominant serotypes with a particular clinical entity was not statistically significant. The coverage rate for PCV10 and PCV13 were 68% and 84%, respectively (Figure 1). Finally, among 11 invasive H. influenzae isolates there were six Hib strains, three non-type b strains, and two non-typeable strains (ntHi).

Fine typing of meningococcal isolates revealed high antigenic diversity (Table 2). The most frequent antigenic fine type was P1.5-1,10-4 detected in seven serogroup B isolates. Among these strains, three shared the F5-8 type of FetA gene (data not shown). In order to further characterize isolated strains, MLST analysis was performed on pneumococcal isolates of vaccine-related serotypes. Twelve different STs were identified, and each of them was related to a particular serotype. The predominant ones were ST320 and ST271 (related to serotype 19F), ST15 (serotype 14), ST273 (serotype 6B), and ST81 (serotype 23F) (Table 2). Most of the identified STs were related to variants of the Pneumococcal Molecular Epidemiology Network (PMEN) international clones.

This study provides valuable information on characteristics, serogroup/serotype distribution, and antimicrobial resistance of three major pathogens causing invasive infections in the child population and could be useful for the evaluation of vaccination policy and the integration of new vaccines into the national immunization program in Serbia. A large proportion of IMDs is caused by serogroup B meningococcus which implies that the implementation of vaccines for the prevention of serogroup B-related IMD might be beneficial. Regarding pneumococcus, the majority of IPD serotypes are included in the available PCVs, indicating that the recent introduction of PCV10 will likely result in a reduction of morbidity and mortality due to IPDs, as well as antimicrobial resistance in the near future. As for H. influenzae, though the effectiveness of the Hib vaccination is evident, a substantial burden of non-b and non-typeable disease remains.

The following are available online at https://www.mdpi.com/article/10.3390/diagnostics11061059/s1, Materials and methods for molecular identification and typing of meningococcal and pneumococcal isolates and Supplementary Table S1. Primers used in PCR amplification and DNA sequencing.

This research was funded in part by the Ministry of Education, Science, and Technological Development of the Republic of Serbia, Project (Grants No. 175039 and No. 175024). GlaxoSmithKline and Pfizer Inc. donated anti-pneumococcal antisera, but had no role in study design, data collection and analysis, or preparation of the manuscript.

The study was conducted according to the guidelines of the Declaration of Helsinki, and approved by the Ethics Committee of the Faculty of Medicine, University of Belgrade (1550/II-4).

The data presented in this study are available on request from the corresponding author. The information regarding meningococcal isolates is deposited at the European Meningococcal Epidemiology in Real-Time (EMERT) database (http://emgm.eu/emert/ accessed on 1 January 2021). 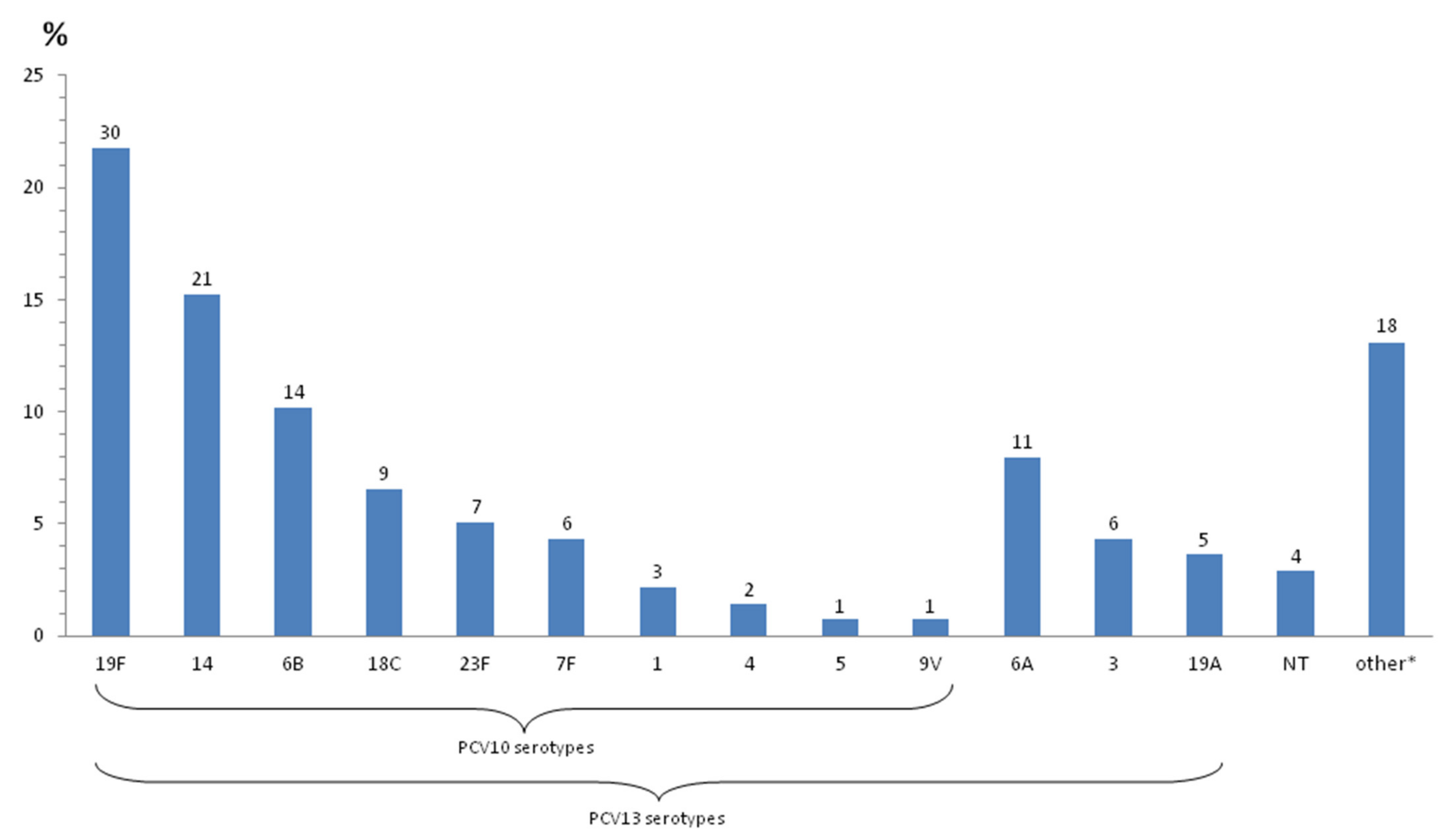