Influenza poses a serious health threat and creates an economic burden for people around the world. The accurate diagnosis of influenza is critical to the timely clinical treatment of patients and the control of outbreaks to protect public health. Commercially available rapid influenza diagnostic tests (RIDTs) that are operated by visual readout are widely used in clinics to screen influenza infections, but RIDTs suffer from imperfect analytical sensitivity, especially when the virus concentration in the sample is low. Fortunately, the sensitivity can be simply improved through an add-on signal amplification step, i.e., thermal contrast amplification (TCA). To demonstrate the advantage of TCA for influenza diagnosis, we conducted a prospective cohort study on 345 clinical specimens collected for influenza A and B testing during the 2017–2018 influenza season. All samples were tested using the Quidel QuickVue Influenza A + B test, followed by a TCA readout, and then confirmatory polymerase chain reaction testing. Through the TCA detecting sub-visual weak positives, TCA reading improved the overall influenza sensitivity by 53% for influenza A and 33% for influenza B over the visual RIDTs readings. Even though the specificity was compromised slightly by the TCA protocol (relative decrease of 0.09% for influenza A and 0.01% for influenza B), the overall performance was still better than that achieved by visual readout based on comparison of their plots in receiver operating characteristic space and F1 scores (relative increase of 14.5% for influenza A and 12.5% for influenza B). Performing a TCA readout on wet RIDTs also improved the overall TCA performance (relative increase in F1 score of 48%). Overall, the TCA method is a simple and promising way to improve the diagnostic performance of commercial RIDTs for infectious diseases, especially in the case of specimens with low target analytes.
Keywords: influenza; rapid diagnostic test; thermal contrast amplification; point-of-care influenza; rapid diagnostic test; thermal contrast amplification; point-of-care

We conducted a prospective cohort study to read commercial LFAs by a TCA reader to study the sensitivity increase of TCA over the standard LFA with visual readout. A schematic flowchart of the cohort study is shown in Figure 1. At HealthEast Primary Care Clinic in St. Paul, Minnesota, we enrolled a prospective cohort of 345 people with suspected influenza illness during the 2017–2018 influenza season. These persons received routine influenza testing via one nasopharyngeal wash per patient. The nasopharyngeal wash was reported to have similar detection sensitivity and to be more comfortable to patients compared to nasopharyngeal swab [35,36,37]. The sample volume from nasopharyngeal wash (~10 mL) can be larger than nasopharyngeal swab (~3 mL) to enable multiple tests by splitting the sample. The collected wash sample was immediately used to perform influenza LFA testing (QuickVue Influenza A + B Test, Quidel, San Diego, CA, USA) at the clinic. After the LFA had been run and the visual readout recorded, the sample, conjugation, and wicking pads were removed from the LFA to stop any further flow and reaction, thus preserving the assay results. The LFA was then placed in a biohazard bag and later transferred to the University of Minnesota for TCA testing. The remaining wash (several mL) was stored at −80 °C and tested in batch for PCR testing via the University of Minnesota Medical Center clinical laboratories. The LFAs and wash samples from the clinic were de-identified from human subjects and coded with a participant identification number.

Each nasopharyngeal wash sample was tested by a confirmatory FDA-approved influenza A/B RT-PCR test (Xpert® Flu/RSV XC assay, Cepheid, Inc., Sunnyvale, CA, USA), the results of which are viewed as the true results (see Figure 1). The correctness (true or false) of the testing readout, such as the visual readout (+/−) of the LFAs at the clinic and the TCA readout (+/−), were determined by comparison with the PCR results (+/−) serving as the reference standard. Each of the tests was performed blinded by different personnel unaware of the other diagnostic test results.

This prospective cohort study confirms the improved diagnosis of influenza A and B from 345 clinical samples from a prospective clinical cohort by the TCA method, which is a simple add-on step performed after RIDTs. The visual results from RIDTs and thermal results from TCA tests were compared to confirmatory PCR tests, which were viewed as true results. The detection sensitivity of RIDTs was substantially improved by TCA readout (relative increase of 33–55%), although the specificity dropped slightly due to the amplification of nonspecific binding noise from the assay. Overall, the diagnostic performance of the TCA readout surpassed that of the visual readout of RIDTs in terms of the plots in the receiver operating characteristic space and the F1 score. The performance of TCA can be improved by reading wet LFAs upon the completion of the RIDT due to the lower thermal noise in wet LFAs compared to that in dry ones. In summary, TCA is promising for the improved POC diagnosis of infectious diseases with current commercial rapid tests. It is also expected that the TCA performance can be further enhanced by combining TCA with well-designed LFAs having a high signal-to-noise ratio. The translation of laboratory TCA readers to miniaturized commercial readers is ongoing, and further clinical validation with the new readers will be carried out in the future.

Patient consent was waived due to de-identification from all human subjects in the study.

We thank James Sackrison for conversations related to this prospective cohort study. We thank Erin Louwagie and Sydney Kylar for experimental help. We also thank Sarah Cook for editing the manuscript.

There are no conflict to declare. 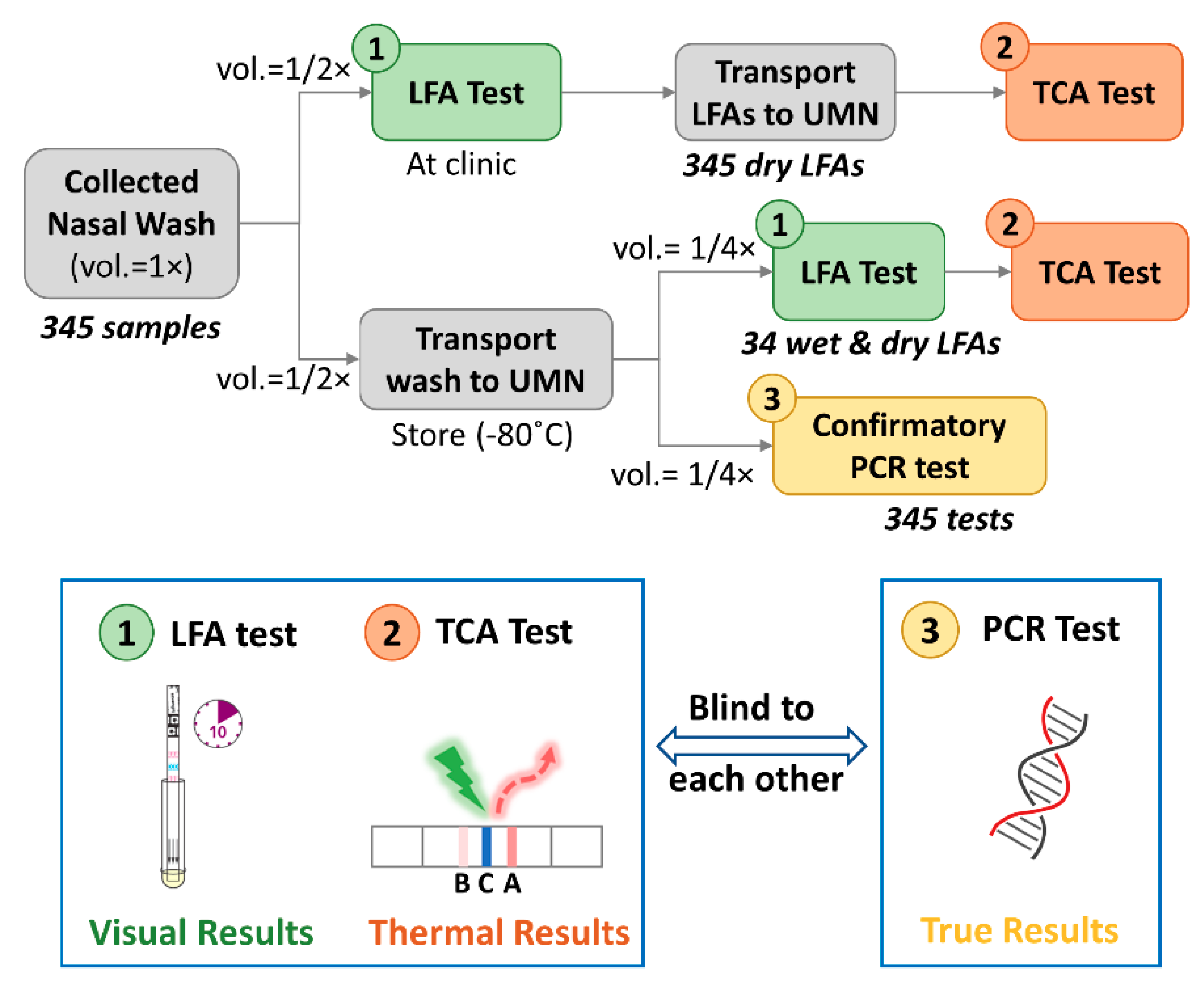