Fecal calprotectin (FC) is a quick, cost-effective, and noninvasive test, which is used to diagnose patients with active inflammatory bowel diseases (IBD). Recent studies suggest the possible predictive role of FC in the diagnosis of small intestinal bacterial overgrowth (SIBO) in patients with systemic sclerosis (SSc). This study aimed to assess the predictive value of FC in SSc patients and its’ possible use as a SIBO marker. A total of 40 SSc patients and 39 healthy volunteers were enrolled in the study. All subjects completed questionnaires evaluating gastrointestinal symptoms, FC measurements, and lactulose hydrogen breath test (LHBT) assessing SIBO presence. After rifaximin treatment, patients with SIBO underwent the same diagnostic procedures. Significantly higher FC values were observed in the study group compared to controls (97 vs. 20 μg/g; p < 0.0001) and in SSc patients diagnosed with SIBO compared to SSc patients without SIBO (206 vs. 24 μg/g; p = 0.0010). FC turned out to be a sensitive (94.12%) and specific (73.68%) marker in the detection of SIBO in patients with SSc (AUC = 0.82, 95% CI = 0.66–0.93; p < 0.0001). Our study suggests the potential value of FC in SSc in detecting gastrointestinal impairment and its promising role as an additional diagnostic tool for SIBO. View Full-Text
Keywords: calprotectin; small intestinal bacterial overgrowth; SIBO; systemic sclerosis calprotectin; small intestinal bacterial overgrowth; SIBO; systemic sclerosis
►▼ Show Figures 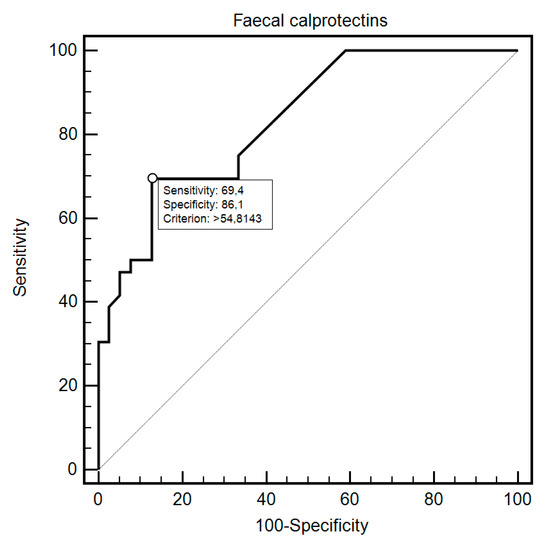