Settled on the foundations laid by zoologists and embryologists more than a century ago, the study of symbiosis between prokaryotes and eukaryotes is an expanding field. In this review, we present several models of insect–bacteria symbioses that allow for the detangling of most known features of this distinctive way of living, using a combination of very diverse screening approaches, including molecular, microscopic, and genomic techniques. With the increasing the amount of endosymbiotic bacteria genomes available, it has been possible to develop evolutionary models explaining the changes undergone by these bacteria in their adaptation to the intracellular host environment. The establishment of a given symbiotic system can be a root cause of substantial changes in the partners’ way of life. Furthermore, symbiont replacement and/or the establishment of bacterial consortia are two ways in which the host can exploit its interaction with environmental bacteria for endosymbiotic reinvigoration. The detailed study of diverse and complex symbiotic systems has revealed a great variety of possible final genomic products, frequently below the limit considered compatible with cellular life, and sometimes with unanticipated genomic and population characteristics, raising new questions that need to be addressed in the near future through a wider exploration of new models and empirical observations. View Full-Text
Keywords: endosymbiosis; genome-reduction syndrome; consortium; primary endosymbiont; secondary endosymbiont; Buchnera; Sulcia; Tremblaya; symbiotic replacement; minimal genomes endosymbiosis; genome-reduction syndrome; consortium; primary endosymbiont; secondary endosymbiont; Buchnera; Sulcia; Tremblaya; symbiotic replacement; minimal genomes
►▼ Show Figures 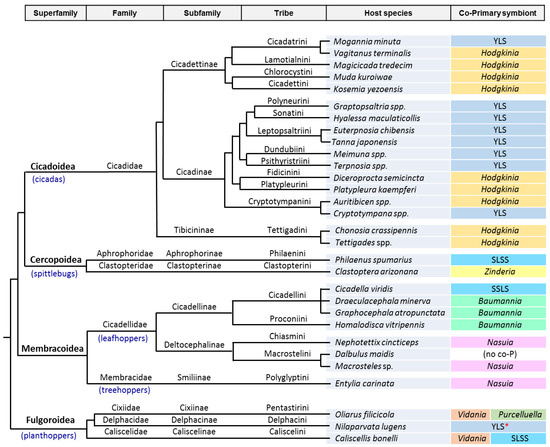