Geochemistry and the Origin of Life: From Extraterrestrial Processes, Chemical Evolution on Earth, Fossilized Life’s Records, to Natures of the Extant Life
Next Article in Special Issue

Biodiversity and Abundance of Cultured Microfungi from the Permanently Ice-Covered Lake Fryxell, Antarctica

Recently, the construction of models for multicellular systems such as tissues has been attracting great interest. These model systems are expected to reproduce a cell communication network and provide insight into complicated functions in living systems./Such network structures have mainly been modelled using a droplet and a vesicle. However, in the droplet and vesicle network, there are difficulties attributed to structural instabilities due to external stimuli and perturbations. Thus, the fabrication of a network composed of a stable component such as hydrogel is desired. In this article, the construction of a stable network composed of honeycomb-shaped microhydrogels is described. We produced the microhydrogel network using a centrifugal microfluidic technique and a photosensitive polymer. In the network, densely packed honeycomb-shaped microhydrogels were observed. Additionally, we successfully controlled the degree of packing of microhydrogels in the network by changing the centrifugal force. We believe that our stable network will contribute to the study of cell communication in multicellular systems.
Keywords: cell communication; artificial cell/tissue; microhydrogel network; microfluidics cell communication; artificial cell/tissue; microhydrogel network; microfluidics

In a living multicellular system, such as tissue, sophisticated functions are realized via the organization of individual cells. Recently, the experimental construction of models for living multicellular systems has attracted considerable interest. The use of such model systems allows the extraction of the essence of highly orchestrated but complicated functions in living systems, and helps to understand them. In particular, recent development of a network model system that is useful for understanding cell communications has been remarkable. Cell communication is essential for many important and vital functions in biological systems. For example, gap junctions perform the exchange of small molecules and ions, which is vital for homeostasis maintenance [1,2]; cell communication through molecular diffusion is an important factor in the pattern formation of skin [3,4]. Using diffusively-connected networks of droplets, various pattern formations [5,6], chemical communications via quorum signalling molecules [7], and a differentiation process [8] have been investigated. In the surfactant bilayer network [9] and networks of aqueous droplets [10,11], the construction of pore-connected pathways conducting an electric current was demonstrated. Furthermore, a three-dimensional (3D) network composed of lipid-coated aqueous droplets was realized using 3D-printing technology; the self-folding of droplet networks was demonstrated by an osmotic interaction between droplets [12]. Further, although the network size is not large, recently, the construction of vesicle networks has been in development [13,14]. Currently, droplet and vesicle networks are an important platform for understanding the communication in living multicellular systems. However, because the contact boundaries of the droplets or the vesicles are unstable, problems such as unexpected coalescence due to external factors, e.g., electric current, and the difficulty of handling the network, cannot be neglected. Challenging studies reported a network that was embedded in an organogel block to stabilize the whole network structure [15], but the problem of instability at the boundary between droplets remained. Another group proposed highly-stable communicating droplets encapsulated in a hydrogel [16]. However, it is difficult to construct a network structure as large as a living multicellular system, because the size of the hydrogel encapsulating the droplet is in the millimeter scale. Hence, previous studies have not succeeded in the construction of a network model for multicellular systems with stability against external stimuli. To achieve this, construction of a micrometer-scale network model composed of a stable component (e.g., hydrogels) is required. Here, we propose a fabrication method for a network structure composed of stable honeycomb-shaped microhydrogels. Our method can control the size and packing degree of each honeycomb-shaped microhydrogel. In this paper, we first describe the fabrication of the honeycomb microhydrogel network with the control of the size and the packing degree. In addition, molecular diffusion among the honeycomb-shaped microhydrogels was investigated. Finally, the fabrication of a triple-layered honeycomb microhydrogel network and a network composed of double-faced honeycomb microhydrogels was demonstrated. The method described in this paper will be useful for constructing a sophisticated experimental model and understanding the essence of cell communication in living systems.

2.3. Experiment and Analysis of Fluorescence Recovery after Photobleaching (FRAP)

3.2. Control of Structure in Hydrogel Network by Changing Centrifugal Force

As shown in Figure 2, it is speculated that one of the factors of the honeycomb packing was FG-induced deformation. Hence, we demonstrated the control of the hydrogel network structure by changing FG. We fabricated the honeycomb hydrogel network under FG = 67,312, and 1183× g, as shown in Figure 3a–c, respectively. From those CLSM images of the hydrogel network under each FG, the area Sgel, the gap area Sgap and the size parameter d of the individual hydrogel were obtained. In the lower images in Figure 3a–c, Sgap are colored blue. Histograms of d in FG = 67,312, and 1183× g are shown in Figure 3d, indicating that size distributions were narrow in each FG. We attributed this size controllability to our centrifuge-based microfluidic device [17,18]. As shown in Figure 3e, the mean of size parameter <d> decreased as FG increased, indicating that the size of the hydrogels in the network structure was well controlled. In the condition of FG = 1183× g, the droplet-discharging frequency was high. In this situation, more droplets can be additionally introduced in the packing layer, which increased the force of the lateral contact. As a result, <d> decreased.
On the other hand, when FG = 67× g, the droplet-discharging frequency was low. In this case, it is speculated that most of the droplets polymerized completely before the formation of the sphere packing. Because the completely polymerized droplets cannot be deformed, additional droplets were not packed in the existing layer. As a result, <d> was larger than <d> in FG = 1183× g. Furthermore, to analyze the relationship between FG and the degree of packing, we measured the gap area Sgap (blue areas in Figure 3a–c), and R = Sgap/Sgel was defined. As shown in Figure 3f, R decreased as FG increased, indicating that R was also controlled by changing the applied FG. We attributed this controllability of the network structure to the stability of the hydrogel. As previously indicated, the network structure was controlled using the deformation of the individual microhydrogels. The hydrogel stably retained its shape as it solidified, and the packing degree of the constructed network was thus well controlled.

Figure 5a shows the construction of the triple-layered honeycomb microhydrogel network (left: single layer, middle: double layer, right: triple layer). The triple-layered structure was constructed as Figure 5a. The insets show fluorescent colors (upper) and simplified diagrams of the layered honeycomb microhydrogel network (lower). The boundaries and middle positions of layers are shown in Figure 5b. The upper panel shows CLMS images, and the black arrows in the lower illustrations show the observed position of the triple-layered structure. In the CLMS observation, a zy-plane of the cut triple-layered structure was observed. These images indicate that the boundaries were formed; thus, by the stacking of each layer, we successfully fabricated the triple-layered honeycomb microhydrogel network. On the other hand, in the second layer (red), the honeycomb packing did not form clearly, as compared with the other layers. This incompleteness may be attributed to the excessive deformation of the droplets, as discussed for the results in Figure 2b.
We consider that the first layer in the second left CLMS image in Figure 5b looked green because the aggregation of fluorescent beads was formed in the photosensitive polymer solution, resulting in a non-uniform fluorescent color. In addition, although the boundary of the layer appeared yellow (the second and fourth left CLMS images in Figure 5b), we speculate that this was because the color of the upper and lower layers overlapped.
This triple-layered honeycomb microhydrogel network was sufficiently stable and did not break, even when it was manipulated using a tweezer (Figure 5c). This stable network will enlarge the range of experiments. For example, a dynamic and quick change of the environment surrounding the network could be easily achieved by transferring the network to another solution using a tweezer.
The triple-layered honeycomb microhydrogel network has the potential to reproduce the cell communication in multi-layered living tissue, such as blood vessels and skin. These tissues consist of layers formed by different cells, each of which has a different role. By stacking a variety of network layers, for example, layers including different functional molecules and cells, a multi-layered network with different functions can be constructed. Besides, the thickness of each layer can be controlled by the duration of centrifugation.

The fabrication of the network structure composed of double-faced honeycomb hydrogels is demonstrated in Figure 6a,b. It was confirmed that each of the honeycomb-shaped microhydrogels in the network was compartmentalized in two parts—the part containing red fluorescent microbeads and the part containing green fluorescent microbeads—as clearly shown in the high-magnification image (Figure 6b). Also, this demonstration suggests that a network composed of the multi-compartmentalized honeycomb-shaped microhydrogel with more than two compartments, may be realized using glass capillaries with more than two compartments [17,18].
The construction of the network composed of the multi-faced honeycomb-shaped microhydrogels is valuable. Such heterogeneous features are widely observed in biological systems. For example, epithelial cells exhibit spatial heterogeneities of channel proteins for efficient molecular transport. Honeycomb-shaped microhydrogels made heterogeneously from solutions with different concentrations could be used to realize a network with a heterogeneous diffusion profile. Furthermore, a combination of the multi-layered (Figure 5) and multi-faced (Figure 6) honeycomb microhydrogel network will be an ideal platform for mimicking the sophisticated functions of tissues. 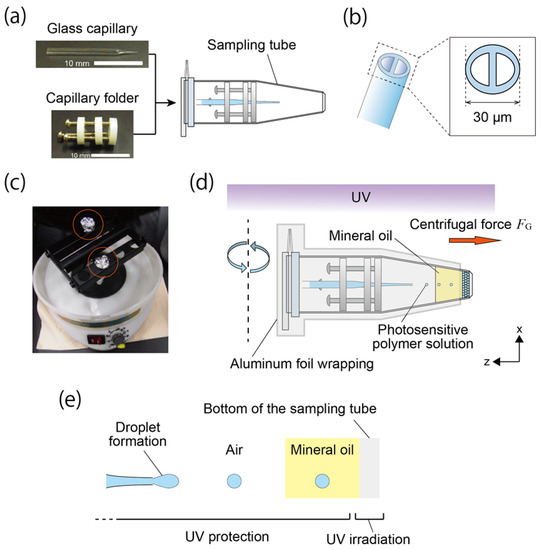 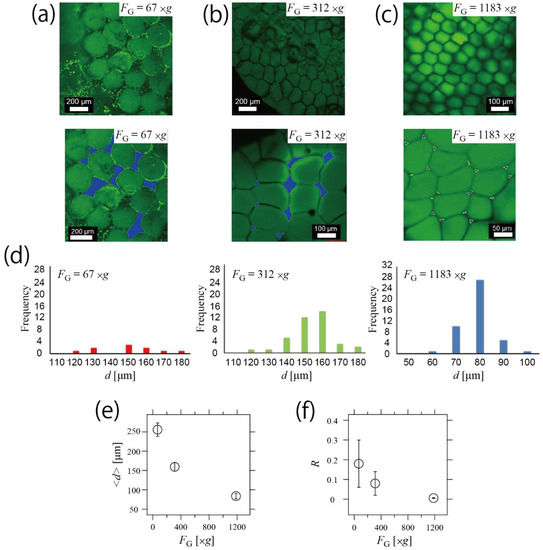 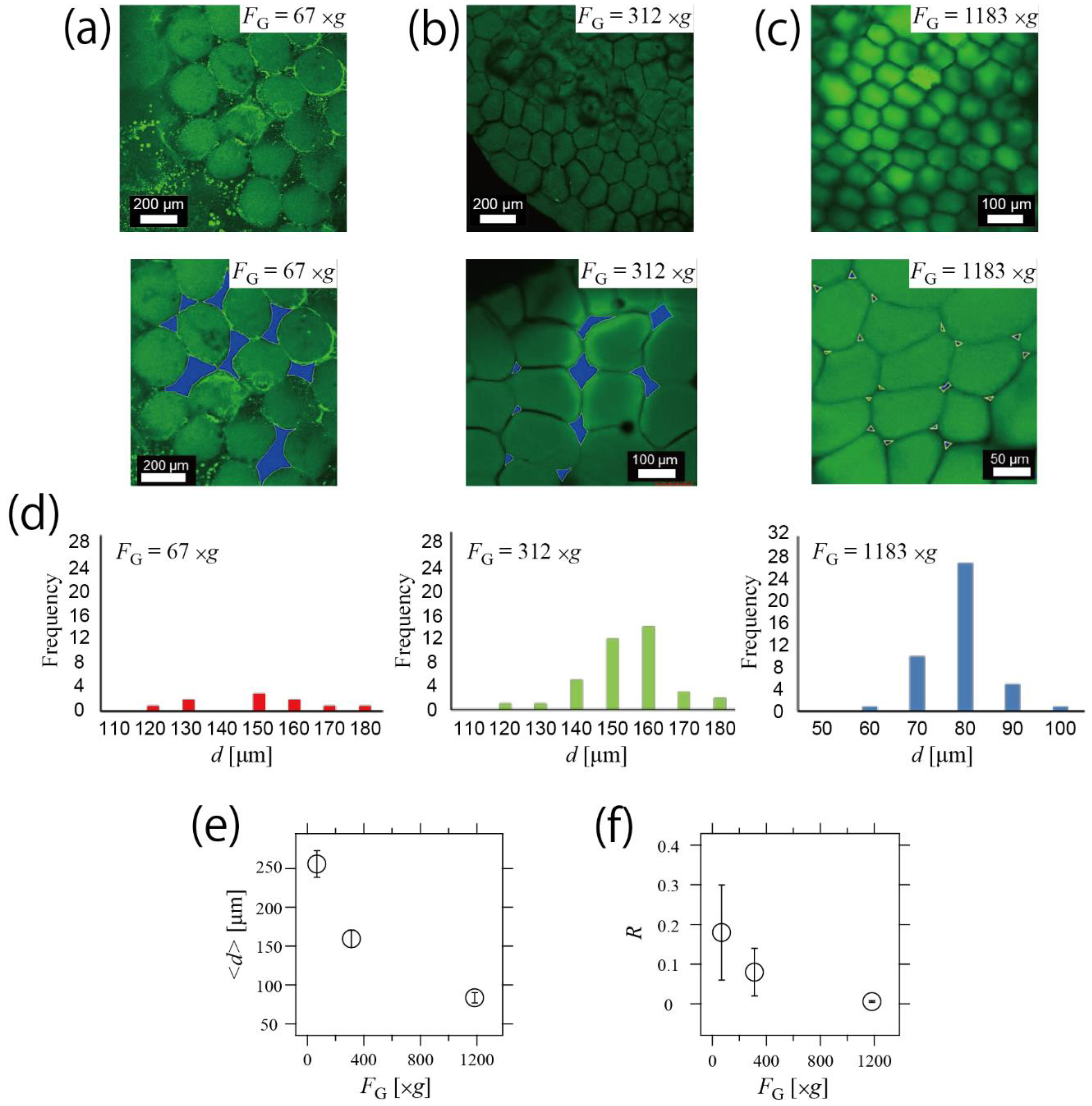 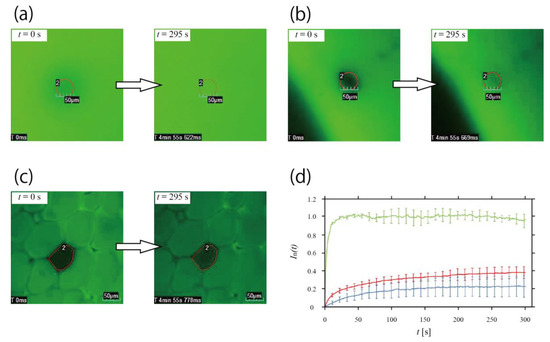 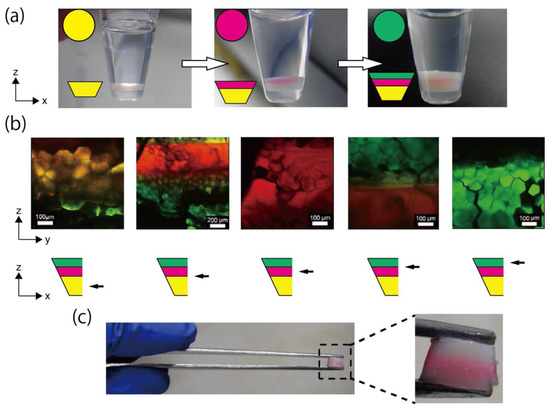 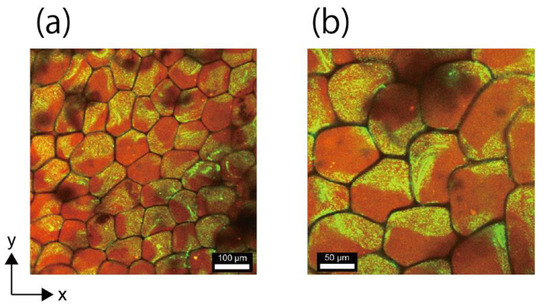