Small and Random Peptides: An Unexplored Reservoir of Potentially Functional Primitive Organocatalysts. The Case of Seryl-Histidine
Next Article in Special Issue

Frozen Accident Pushing 50: Stereochemistry, Expansion, and Chance in the Evolution of the Genetic Code
Previous Article in Journal

What Froze the Genetic Code?

The proposal that the genetic code was formed on the basis of (proto)tRNA Dimer-Directed Protein Synthesis is reviewed and updated. The tRNAs paired through the anticodon loops are an indication on the process. Dimers are considered mimics of the ribosomes—structures that hold tRNAs together and facilitate the transferase reaction, and of the translation process—anticodons are at the same time codons for each other. The primitive protein synthesis system gets stabilized when the product peptides are stable and apt to bind the producers therewith establishing a self-stimulating production cycle. The chronology of amino acid encoding starts with Glycine and Serine, indicating the metabolic support of the Glycine-Serine C1-assimilation pathway, which is also consistent with evidence on origins of bioenergetics mechanisms. Since it is not possible to reach for substrates simpler than C1 and compounds in the identified pathway are apt for generating the other central metabolic routes, it is considered that protein synthesis is the beginning and center of a succession of sink-effective mechanisms that drive the formation and evolution of the metabolic flow system. Plasticity and diversification of proteins construct the cellular system following the orientation given by the flow and implementing it. Nucleic acid monomers participate in bioenergetics and the polymers are conservative memory systems for the synthesis of proteins. Protoplasmic fission is the final sink-effective mechanism, part of cell reproduction, guaranteeing that proteins don’t accumulate to saturation, which would trigger inhibition. View Full-Text
Keywords: genetic code; (proto)tRNA Dimer-Directed Protein Synthesis; self-reference; modularity; error-compensation; metabolism chronology; protein stability; punctuation genetic code; (proto)tRNA Dimer-Directed Protein Synthesis; self-reference; modularity; error-compensation; metabolism chronology; protein stability; punctuation
►▼ Show Figures 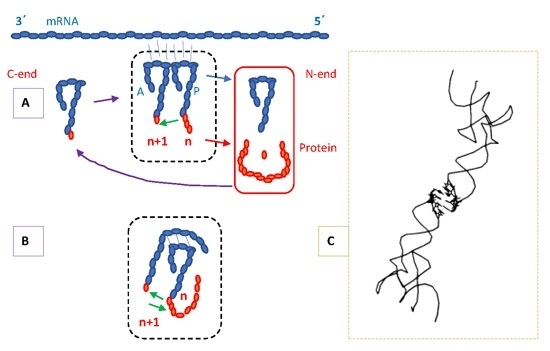