RNA Catalysis, Thermodynamics and the Origin of Life
Previous Article in Special Issue

Setting the Stage for Habitable Planets

We discuss the chemical pre-conditions for planet formation, in terms of gas and ice abundances in a protoplanetary disk, as function of time and position, and the resulting chemical composition and cloud properties in the atmosphere when young gas giant planets form, in particular discussing the effects of unusual, non-solar carbon and oxygen abundances. Large deviations between the abundances of the host star and its gas giants seem likely to occur if the planet formation follows the core-accretion scenario. These deviations stem from the separate evolution of gas and dust in the disk, where the dust forms the planet cores, followed by the final run-away accretion of the left-over gas. This gas will contain only traces of elements like C, N and O, because those elements have frozen out as ices. PRODIMO protoplanetary disk models are used to predict the chemical evolution of gas and ice in the midplane. We find that cosmic rays play a crucial role in slowly un-blocking the CO, where the liberated oxygen forms water, which then freezes out quickly. Therefore, the C/O ratio in the gas phase is found to gradually increase with time, in a region bracketed by the water and CO ice-lines. In this regions, C/O is found to approach unity after about 5 Myrs, scaling with the cosmic ray ionization rate assumed. We then explore how the atmospheric chemistry and cloud properties in young gas giants are affected when the non-solar C/O ratios predicted by the disk models are assumed. The DRIFT cloud formation model is applied to study the formation of atmospheric clouds under the influence of varying premordial element abundances and its feedback onto the local gas. We demonstrate that element depletion by cloud formation plays a crucial role in converting an oxygen-rich atmosphere gas into carbon-rich gas when non-solar, premordial element abundances are considered as suggested by disk models. View Full-Text
Keywords: astrochemistry; element abundances; extra-solar planets; gas giants; planet formation; cloud formation astrochemistry; element abundances; extra-solar planets; gas giants; planet formation; cloud formation
►▼ Show Figures 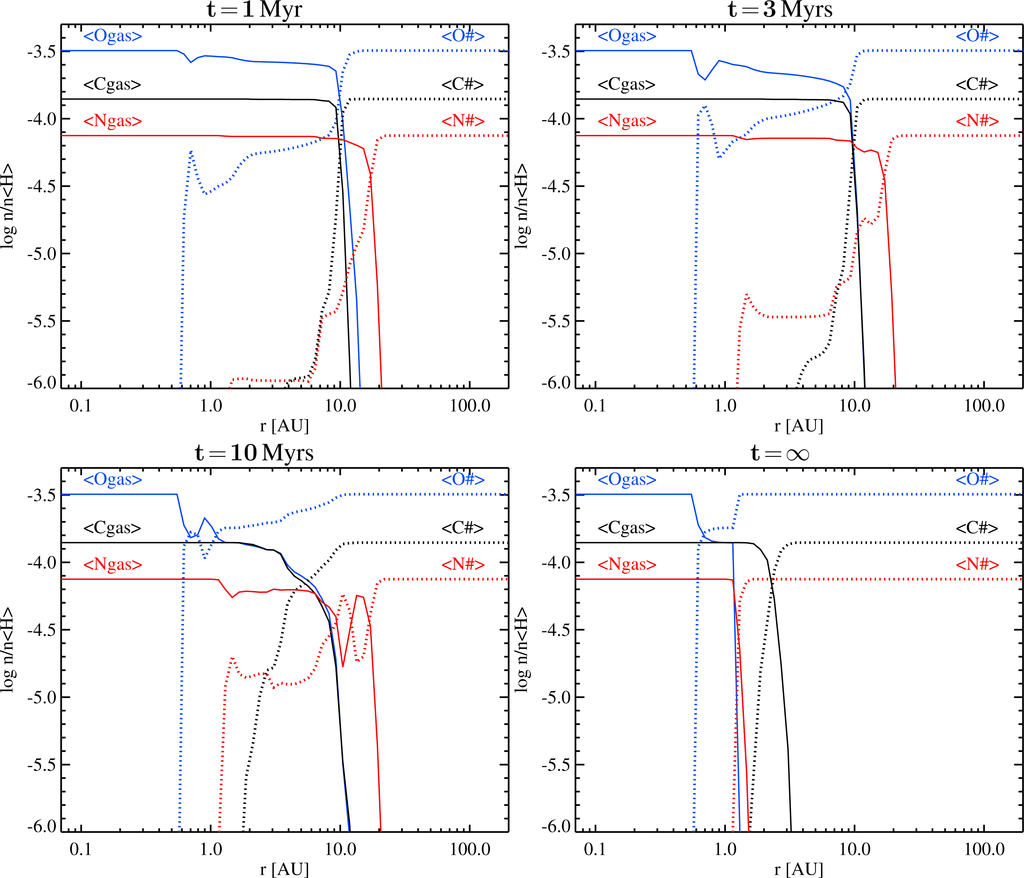