Is Struvite a Prebiotic Mineral?

The prebiotic relevance of mineral struvite, MgNH4PO4·6H2O, was studied experimentally as a phosphorylating reagent and, theoretically, to understand the geochemical requirements for its formation. The effectiveness of phosphorylation by the phosphate mineral, monetite, CaHPO4, was also studied to compare to the efficiency of struvite. The experiments focused on the phosphorylation reactions of the minerals with organic compounds, such as nucleosides, glycerol and choline chloride, and heat at 75 °C for about 7–8 days and showed up to 28% phosphorylation of glycerol. In contrast, the compositional requirements for the precipitation of struvite are high ammonium and phosphate concentrations, as well as a little Ca2+ dissolved in the water. Combined, these requirements suggest that it is not likely that struvite was present in excess on the early Earth to carry out phosphorylation reactions. The present study focuses on the thermodynamic aspects of struvite formation, complementing the results given by Orgel and Handschuh (1973), which were based on the kinetic effects. View Full-Text
Keywords: phosphorus; prebiotic synthesis; struvite; origin of life; phosphate esters phosphorus; prebiotic synthesis; struvite; origin of life; phosphate esters
►▼ Show Figures 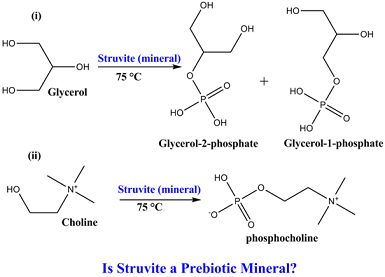