Functional Analysis of Brain Imaging Suggests Changes in the Availability of mGluR5 and Altered Connectivity in the Cerebral Cortex of Long-Term Abstaining Males with Alcohol Dependence: A Preliminary Study
Previous Article in Special Issue

:
Pompe disease is caused by the accumulation of glycogen in the lysosomes due to a deficiency of the lysosomal acid-α-glucosidase (GAA) enzyme. Depending on residual enzyme activity, the disease manifests two distinct phenotypes. In this study, we assess an enzymatic and genetic analysis of Hungarian patients with Pompe disease. Twenty-four patients diagnosed with Pompe disease were included. Enzyme activity of acid-α-glucosidase was measured by mass spectrometry. Sanger sequencing and an MLPA of the GAA gene were performed in all patients. Twenty (83.33%) patients were classified as having late-onset Pompe disease and four (16.66%) had infantile-onset Pompe disease. Fifteen different pathogenic GAA variants were detected. The most common finding was the c.-32-13 T > G splice site alteration. Comparing the α-glucosidase enzyme activity of homozygous cases to the compound heterozygous cases of the c.-32-13 T > G disease-causing variant, the mean GAA activity in homozygous cases was significantly higher. The lowest enzyme activity was found in cases where the c.-32-13 T > G variant was not present. The localization of the identified sequence variations in regions encoding the crucial protein domains of GAA correlates with severe effects on enzyme activity. A better understanding of the impact of pathogenic gene variations may help earlier initiation of enzyme replacement therapy (ERT) if subtle symptoms occur. Further information on the effect of GAA gene variation on the efficacy of treatment and the extent of immune response to ERT would be of importance for optimal disease management and designing effective treatment plans.
Keywords:
Pompe disease; GAA genotype; GAA enzyme activity

Glycogen storage disease type II (Pompe disease or acid maltase deficiency) is an autosomal recessive metabolic disorder characterized by the accumulation of glycogen in the lysosomes due to a deficiency of the lysosomal acid alpha-glucosidase (GAA) enzyme. The gene encoding the enzyme is located on chromosome 17q25.2-q25.3. Pompe disease has two distinct types, the infantile (IOPD) and late-onset (LOPD) forms [1,2,3]. The classical infantile form is characterized by severe hypotonia, cardiomyopathy and respiratory insufficiency in the first months after birth, leading to death in one year if left untreated. In non-classical IOPD, the cardiac involvement is less severe [4]. The late-onset form can manifest from childhood through late adulthood and limb-girdle muscle weakness accompanied by respiratory insufficiency is common [5,6,7]. The clinical phenotypes are associated with the levels of residual GAA enzyme activity. Less than 3% of normal enzyme activity is usually detected in the severe classical infantile-onset cases, while residual levels ranging between 3% and 30% of normal value are found in the less severe late-onset form [6,7]. Lower α-glucosidase activity can also be the result of the presence of an allele, resulting in pseudodeficiency. A pseudodeficient allele never causes Pompe disease, this is one of the reasons why genetic testing must be performed during the diagnostic process of Pompe disease [8]. Patients are classified into CRIM (cross reactive immunologic material) negative and CRIM positive groups, depending on whether the enzyme is completely absent (CRIM-) or present in lower amounts (CRIM+) [9]. Pompe disease has been treated by the regular substitution of recombinant GAA enzyme since 2006, which significantly improved survival and reduced the severity of symptoms in patients of both subtypes. However, it was found to be more effective on reversing cardiac symptoms (one of the main contributors of mortality in the classical IOPD) than on skeletal muscle dysfunction. Enzyme replacement therapy (ERT) is safe and well tolerated [10,11,12,13].
Until now, according to the ClinVar database (http://www.ncbi.nlm.nih.gov/clinvar), there were over 372 pathogenic or likely pathogenic alterations, and 541 variations with uncertain significance are known in the GAA gene, which result the absence or diminished activity of the enzyme. Decreased enzyme activity leads to impaired degradation of glycogen to glucose in the lysosomes. In the early stage, cells contain lysosomes filled with glycogen. As the disease progresses, lysosomes expand in size and number and the membrane of lysosomes rupture, allowing the glycogen to enter the cytoplasm of the cell. The cell flooded with glycogen can no longer maintain its basic processes and dies [14]. The underlying pathophysiological cascade involves the disrupted mechanism of autophagy, protein misfolding and impaired intracellular trafficking, leading to the generation of lipofuscin, an insoluble brownish colored degradation product of unsaturated fatty acids and glycoproteins cross-linked with metal ions [15,16,17,18,19,20]. Generally, widespread accumulation of lipofuscin is recognized as a result of oxidative stress and accompanies the phenomenon of aging [21]. In Pompe disease, beside the primary lysosomal pathology, large amounts of non-contractile lipofuscin inclusion and autophagosomal buildup were found in the muscle fibers of LOPD patients, contributing to their clinical status. These pathological findings showed progression over time, even in patients on ERT treatment [20]. A muscle biopsy of a patient after 6 years on ERT treatment revealed the clearance of intralysosomal glycogen, but this did not affect the progressive accumulation of these debris. The greater the extent and number of autophagosomal and lipofuscin inclusions are before ERT treatment, the less clinical improvement is achieved [20]. This finding indicates that earlier disease onset and later-initiated ERT favors the accumulation of secondary pathological materials, which impair the clinical response to treatment [20].
In this study, we publish the results of the first enzymology and genetic analysis of a Hungarian cohort with Pompe disease. We assessed the protein domain involvement linked to different disease-causing alterations with the possible effect these variants may have on protein structure, GAA enzyme activity and phenotypes.

Twenty-four Hungarian patients from 19 families with Pompe disease were enrolled (16 females and 8 males). The age of participants (in 2021) ranged from 4 to 69 years (mean age 43.5 ± 21.1 years (CI 95% 34.6–51.4)). Patients had Hungarian ethnicity. Written informed consent was obtained from the patients and controls before the sample collection and molecular genetic testing. The study was approved by the Ethical Committee of Semmelweis University. Molecular genetic analysis was performed for diagnostic purposes in all investigated patients. Some of the genetic investigations were performed in the Laboratory of ARCHIMED Life Science (ARCHIMED Life Science, Vienna, Austria).

Enzymatic activity of acid-α-glucosidase (GAA) was measured from dried blood spot (DBS) samples using a multiplex assay (five lysosomal enzyme activities—β-glucocerebrosidase (ABG), α-galactosidase A (GLA), galactocerebrosidase (GALC) and α-iduronidase (IDUA)), as described earlier [25,26]. In all cases 3, biological replicates were evaluated from 3 different blood spots. All blood spots were measured 3 times (technical replicates). Flow injection-MS/MS was performed on a Sciex API4000-QTRAP instrument. The Sciex Analyst Instrument control and Data processing software package (1.4.1) was used to integrate all product and internal standard multiple reaction monitoring (MRM) peaks. Performance of the assay was evaluated using CDC quality control materials [27]. Preparation, storage and shipping of DBSs was carried out in line with previous precautions [28]. Decreased α-glucosidase enzyme activity was considered in case of values < 2.0 μmol/L/h. The 5th percentile was calculated based on the total number of samples previously measured by this multiplex assay.

In the case of P23 patient, CRIM status was determined on a blood sample for routine diagnostic purpose by Western blotting in the Laboratory of Department of Chemical Pathology, Great Ormond Street Hospital for Children NHS Trust. The laboratory is accredited by UKAS by ISO15189:2012 [29].

The group comparisons were performed with Shapiro–Wilk test, Pearson correlation and one-way ANOVA regarding means. p values of <0.05 were considered statistically significant. The 95% confidence intervals (CI95%) for proportions and means were calculated using standard formulas.

The study was approved by the Ethical Committee of Semmelweis University. Molecular genetic analysis was performed for diagnostic purposes in all investigated patients.

Written informed consent was obtained from the patients and controls before the sample collection and molecular genetic testing.

We are grateful to the patients and their clinicians for providing samples and clinical informations. The authors would like to thank Viktor Molnar, Fruzsina Szabó, Csilla Nemes and Tamas Szlepak for helpful discussions; Péter Balicza, Noémi Ágnes Varga for patient recruitment; and Gyorgyi Bathori, Tünde Szosznyák and Marianna Marko for their technical help. We also thank Szabolcs Udvari for language revision. The authors declare that they have no conflicts of interest. The Institute of Genomic Medicine and Rare Disorders is a member of ERN NMD. 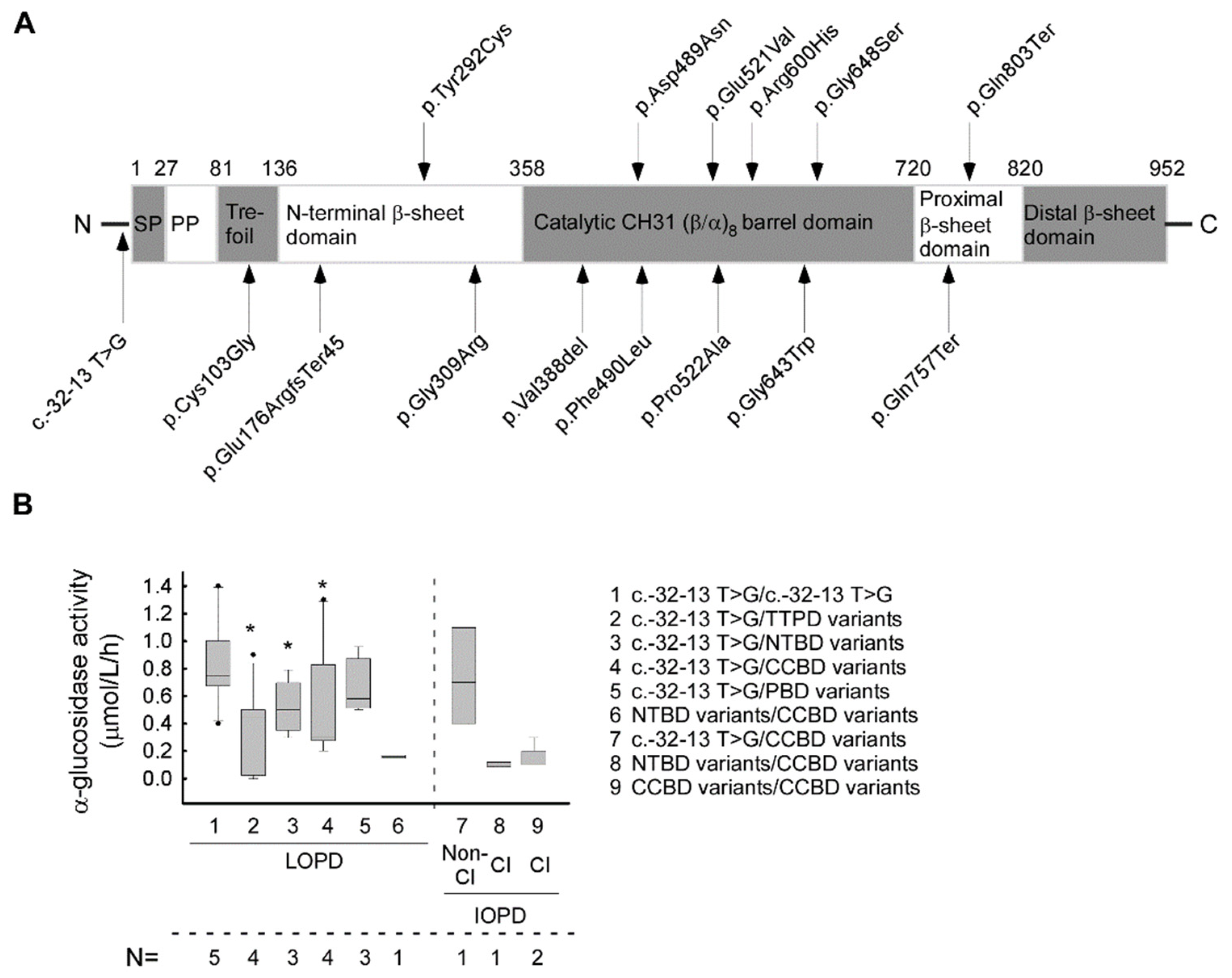