Tailor-Made Hand Exoskeletons at the University of Florence: From Kinematics to Mechatronic Design

Article
The Design of a New Manual Wheelchair for Sport
by

Many studies [1,2,3] assert that wheelchair users suffer from upper limb injuries more frequently than the rest of the population. Since the handrim is the world’s most used manual propulsion system [4], the main causes of upper limb pain depend on the motion of the handrim system that is a pushing movement. Outdoor and indoor motor activities are extremely important for the well-being of everyone. For disabled people, motor activities [5] are also an important tool in rehabilitation from a physical and psychological point of view. Even though motor activities for disabled people are extremely important, they are not easy to practice. First of all, specific sports require specific wheelchairs [6,7,8,9,10,11,12]; secondly, the areas where the disabled can practice sport have to be properly equipped; finally, the disabled are not independent for the transportation of the wheelchair for a specific sport.
The above reasons motivated us to develop a wheelchair with an innovative system of propulsion, which not only allows for the practice of outdoor activities autonomously, but also eliminates the need of a specific wheelchair for sport.
As shown in [13], during a propulsion cycle with the handrim system, the glenohumeral contact force has high peaks. This is one of the factors that can increase the risk of injuries to the shoulders. In addition, in the Conclusions section of [14] “The latter makes tangential force propulsion not only less efficient, but also more straining for the shoulder”. Different articles compare the handrim system with alternative systems of propulsion, such as a lever system [15] and a handcycle [13].
Another approach considers the use of a rowing gesture in order to obtain the propulsion. Furthermore, the rowing stroke [16] is divided into four phases and different articles have studied the efficiency of the rowing gesture [17]. The rowing stroke is a complex movement; the muscles of the legs, trunk, back, shoulders and arms are involved. The rowing stroke can be performed by disabled athletes with different levels of spinal injuries [18]. Disabled people can perform this movement depending on the height of the spinal injuries.
In the last two years, the first prototype, named Handwheelchiar.q01 [19], was released. The first prototype tested the functioning of the innovative system of propulsion and highlighted some critical issues.
In addition to the Handwheelchair.q01, the authors of this paper have wide experience with means of mobility for disabled people [20,21].

The innovative system of propulsion is inspired by the rowing gesture. One of the more important characteristics of the rowing gesture is that the drive phase is obtained using a pulling movement of the arm, instead of a pushing one, typical of handrim and lever systems. The pulling movement could be a good alternative compared to the pushing movement. In this work, a cable solution was introduced in order to realise the rowing motion as a system of propulsion. The cable solution allows users to optimise their motion based on their own individual physical characteristics.
The rowing gesture is composed of two phases. During the traction phase, the user provides power, while in the recovery phase the user goes back to the initial position.
During the traction phase shown in Figure 1, the user pulls two cables by two handles wrapped around two pulleys. Each pulley transmits the torque and rotation to the wheel by a unidirectional mechanism, named a ratchet system. A power spring, which connects the pulley to the chassis of the wheelchair, is loaded. In this phase, the angular speed of the pulley and the wheel are equal.
During the recovery phase shown in Figure 2, the user stops pulling and the power spring, previously loaded, rotates the pulleys in the opposite direction (ωw > 0, ωP < 0). The cables are wrapped around each pulley and the user can start another traction phase.
In Figure 3, the angular position, the angular speed of the pulley and the wheel are shown with the three assumptions:

-
The angular speeds are constant;
-
The time of the traction phase TP is higher than the time of the recovery phase TR;
-
Pure rolling motion.

In Section 4, the mechanism of transmission of motion will be accurately described.

3. Application of the Innovative System in Sport

-
To facilitate and extend outdoor movement;
-
To be firm and maneuverable for indoor spaces; and
-
To practice motor activity independently and in such areas as a park and a cycle path.

In this section, according to the previous paragraph, a simplified dynamic model, Figure 11 and Figure 12, and the description of the free-body diagram, Table 3 and Table 4, of Handwheelchair.q are presented, with the following hypothesis and assumptions:

-
All dynamic characteristics are concentrated on the wheel 1: N2 = 0, T2 = 0;
-
Even if the rolling-resistance coefficient depends on the speed [22], the rolling-resistance coefficient u1 can be assumed to be constant for low speed;
-
The inertia of the wheels and the pulleys is equal to zero: IW1 = 0; IW2 = 0, IP = 0; IRP = 0;
-
The torque of the power spring Ce is constant;
-
Fa is the aerodynamic force, modelled by [22], applied on the Center of Pressure; and
-
The Center of Pressure coincides with the Center of Mass CM.

The user’s force is modelled as follows:

-
The time of the traction phase is Tp and, according to Figure 13, is evaluated as: where, lh is the stroke length of the gesture and τ = 3 is the transmission ratio defined by:

The Figure 14, shows the traction phase during the indoor test of the first prototype Handwheelchair.q01.

-
According to [12,13], during the tests the propulsion power was between 15 and 55 W. The average propulsion power for a cycle can be assumed to be between 20 and 25 W;
-
The user’s force Fu has been modelled with a polynomial 2-3-4 in order to define an approximate model of the “Handle force Fh” [23], as shown in Figure 15;
-
The scale of force Fu is determined in order to obtain the average power of 20–25 W;
-
The recovery time Tr is constant;
-
The user’s force during the recovery phase is zero.

According to the free-body diagram previously reported, and with the abovementioned hypothesis and assumptions:
The equilibrium of the wheelchair along the axis x results
The equilibrium of the wheelchair along the axis z is
The rotation equilibrium of wheel 1 around the joint Cw1 results
The rotation equilibrium of the pulley around the joint CP is
The rotation equilibrium of the return pulley around the joint CRP is
By replacing Equations (10), (11), (13) and (14) in Equation (12), it results:
By rewriting Equation (15), the acceleration can be evaluated as:
Equation (16) and the model of the user’s power have been implemented in Matlab/Simulink.
During the steady-state phase, the average wheelchair speed is constant. Figure 16 show respectively the wheelchair speed and the user’s power during a complete cycle: traction phase and recovery phase.
The average power of 23 W and the average speed of 1.57 m/s = 5.65 km/h obtained with the simulation is in accordance with the tests carried out in [12,13,15].
By employing the user’s force model, we obtain a Fu_max = 120 N as shown in Figure 17, while the average force Fu_avg = 43 N. The force Fu is the sum of the right and left arm contribution: Fur + Ful. Then, the average force for each arm is approximately

The development of an innovative system of propulsion for manual wheelchairs is described in different possible sketches in order to be implemented in sports wheelchairs and for wheelchairs employed in everyday life. In addition, the design of the mechanism for the transmission of motion is presented. The innovative system of propulsion could be a robust idea to solve injuries on the upper limb caused by the other manual system of propulsion. The project of the prototype, named Handwheelchair.q02, is still being developed.
A simplified dynamic model has provided preliminary results in terms of force and power during a rowing stroke cycle applied to a manual wheelchair. In the future, the test data of the prototype Handwheelchair.q02 will confirm or deny these predictions. 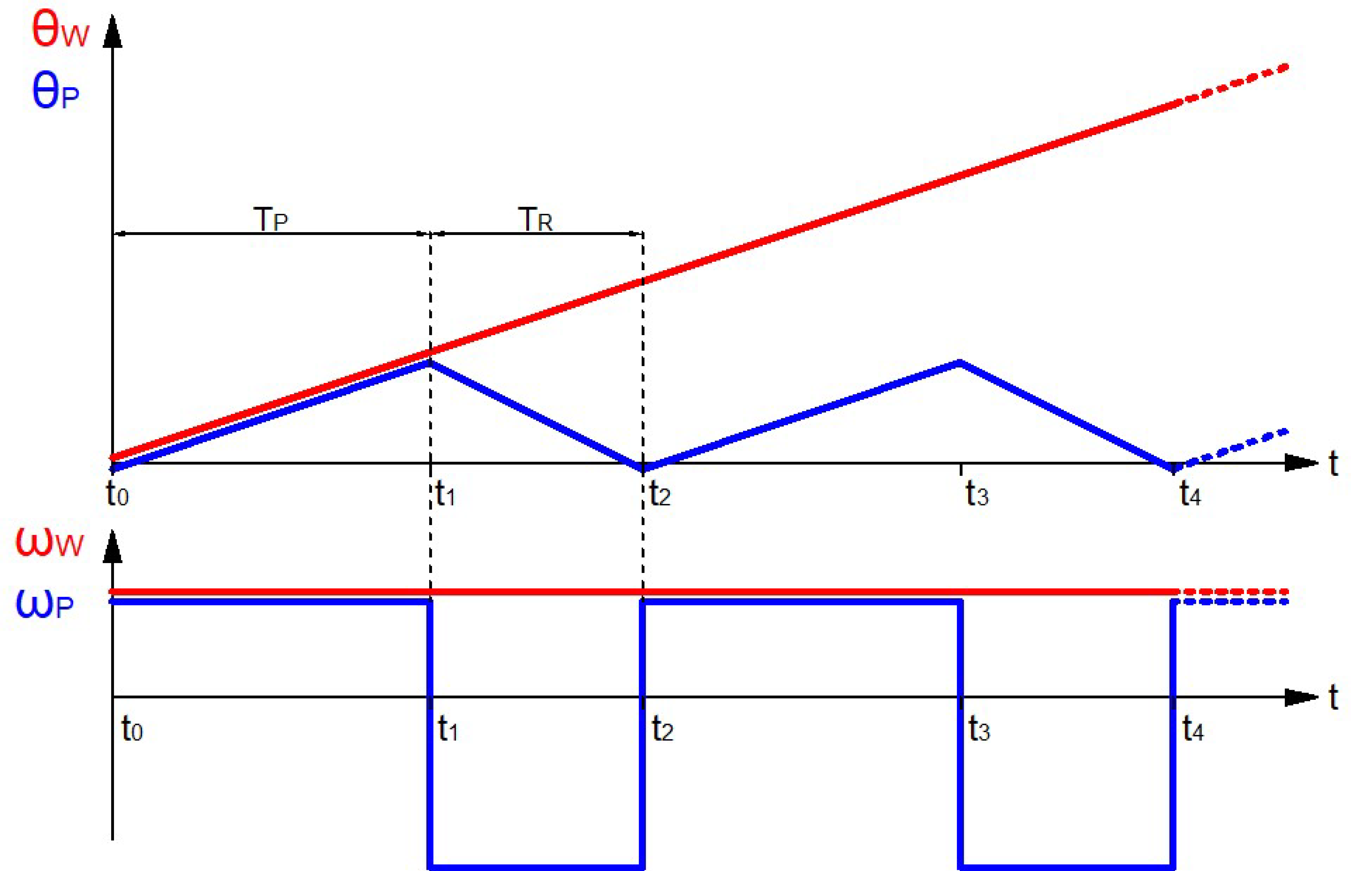 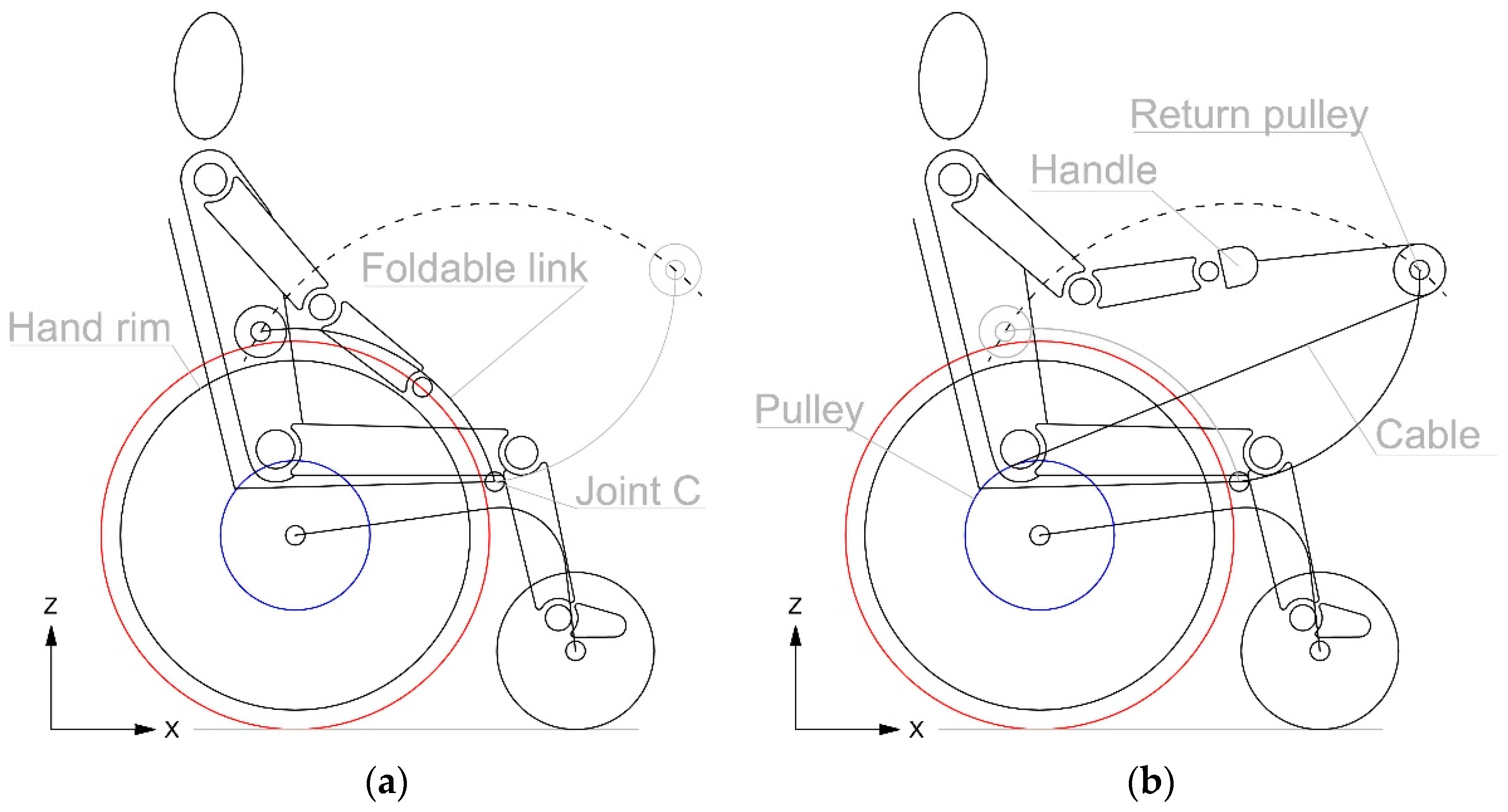 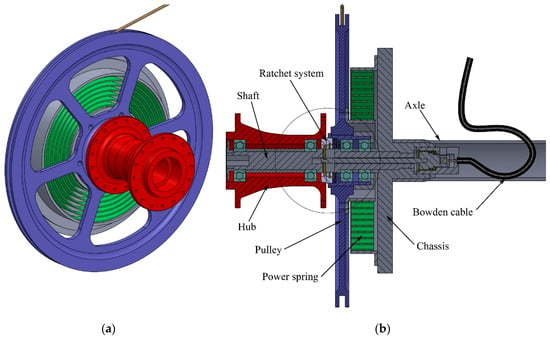 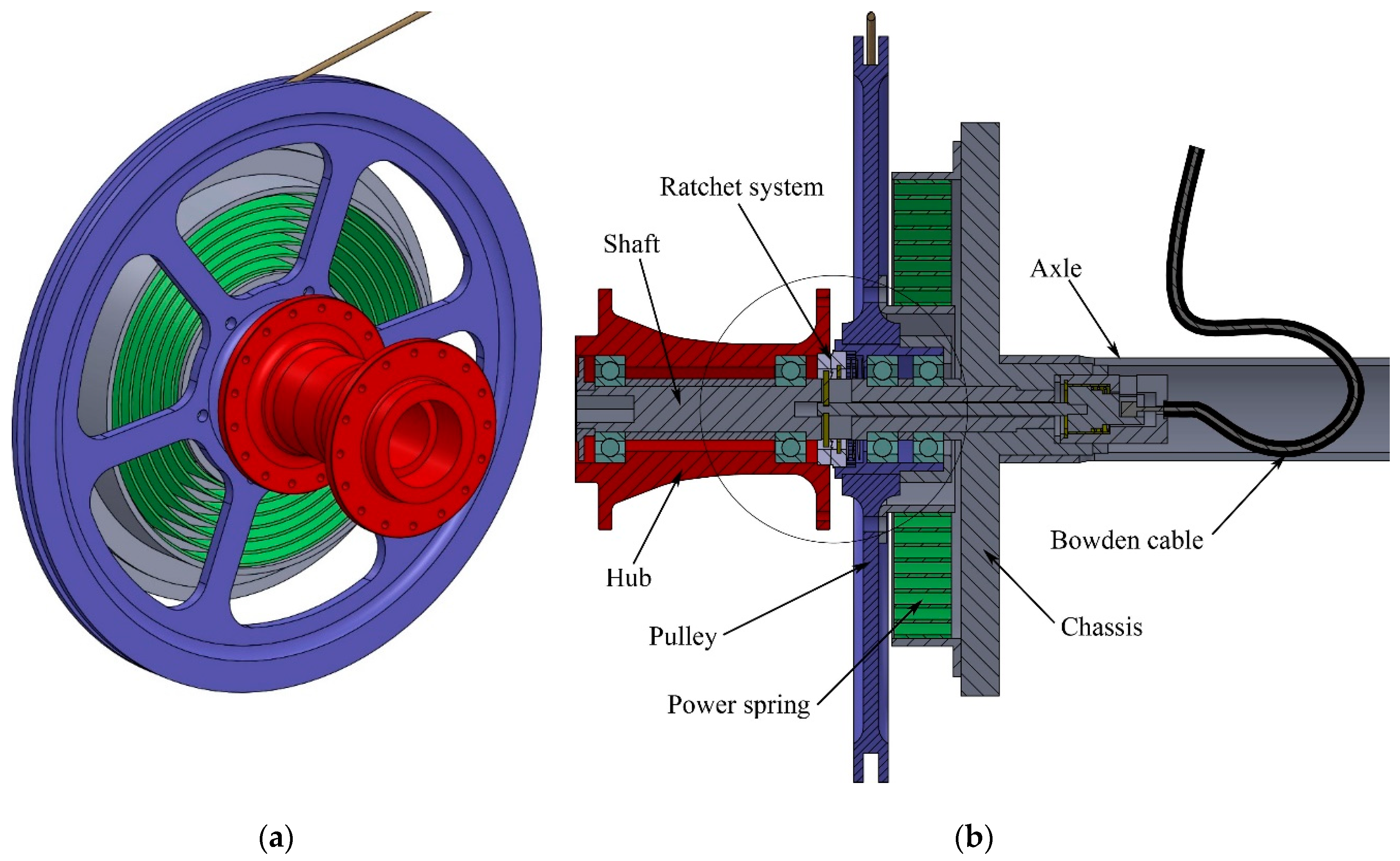 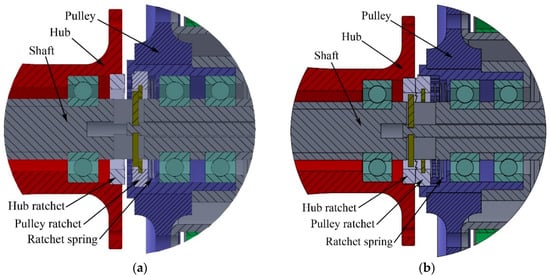 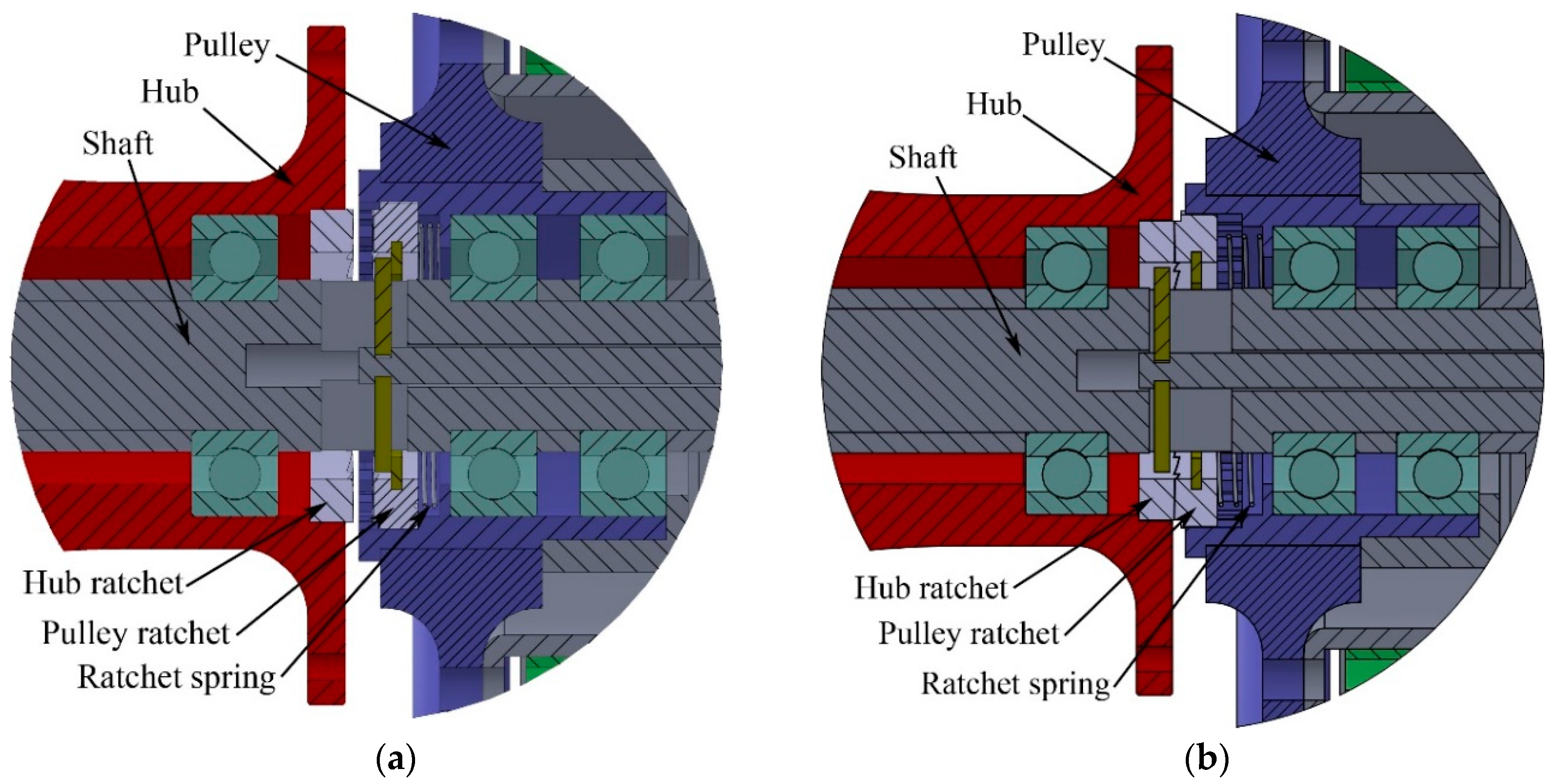 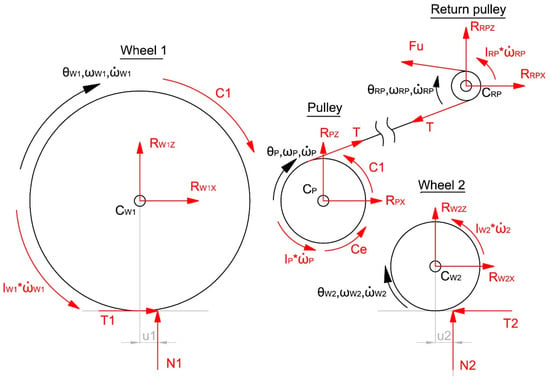 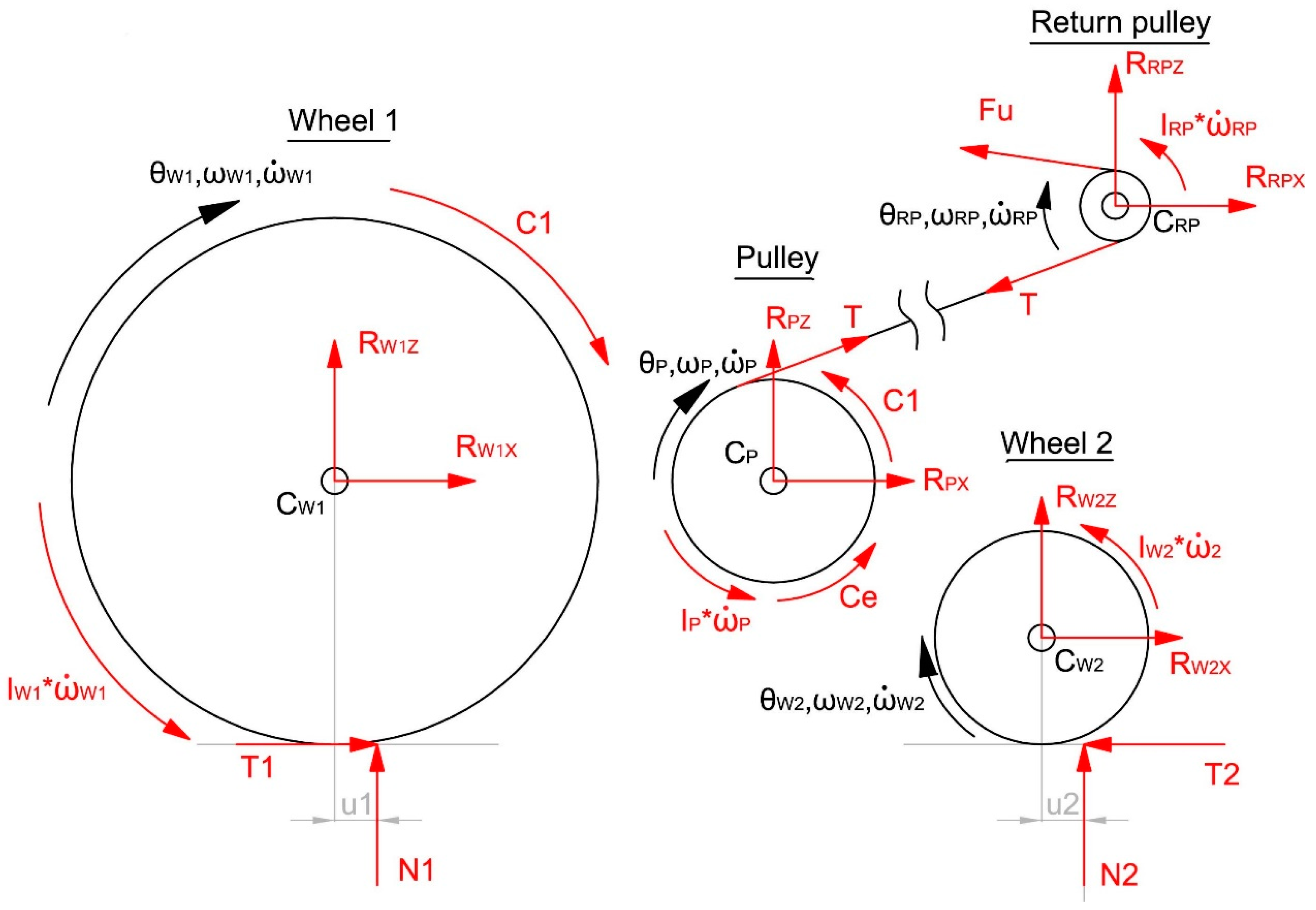 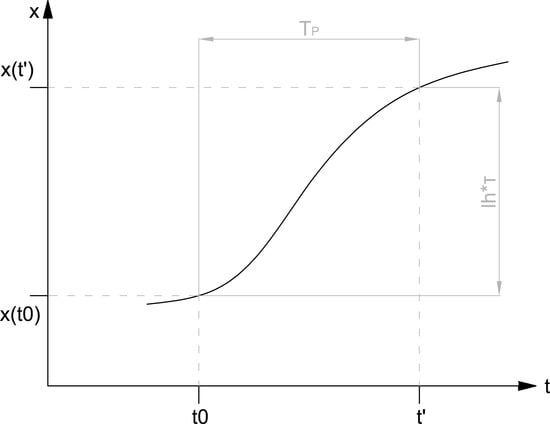 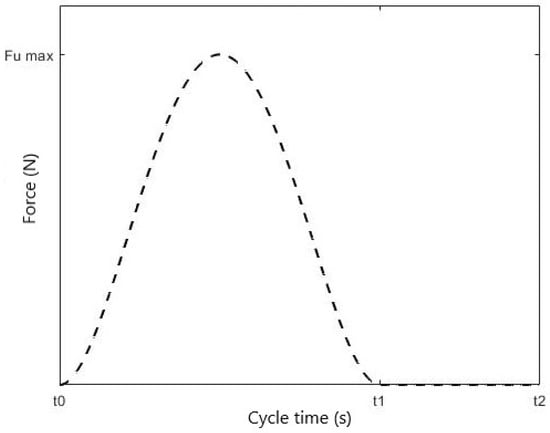 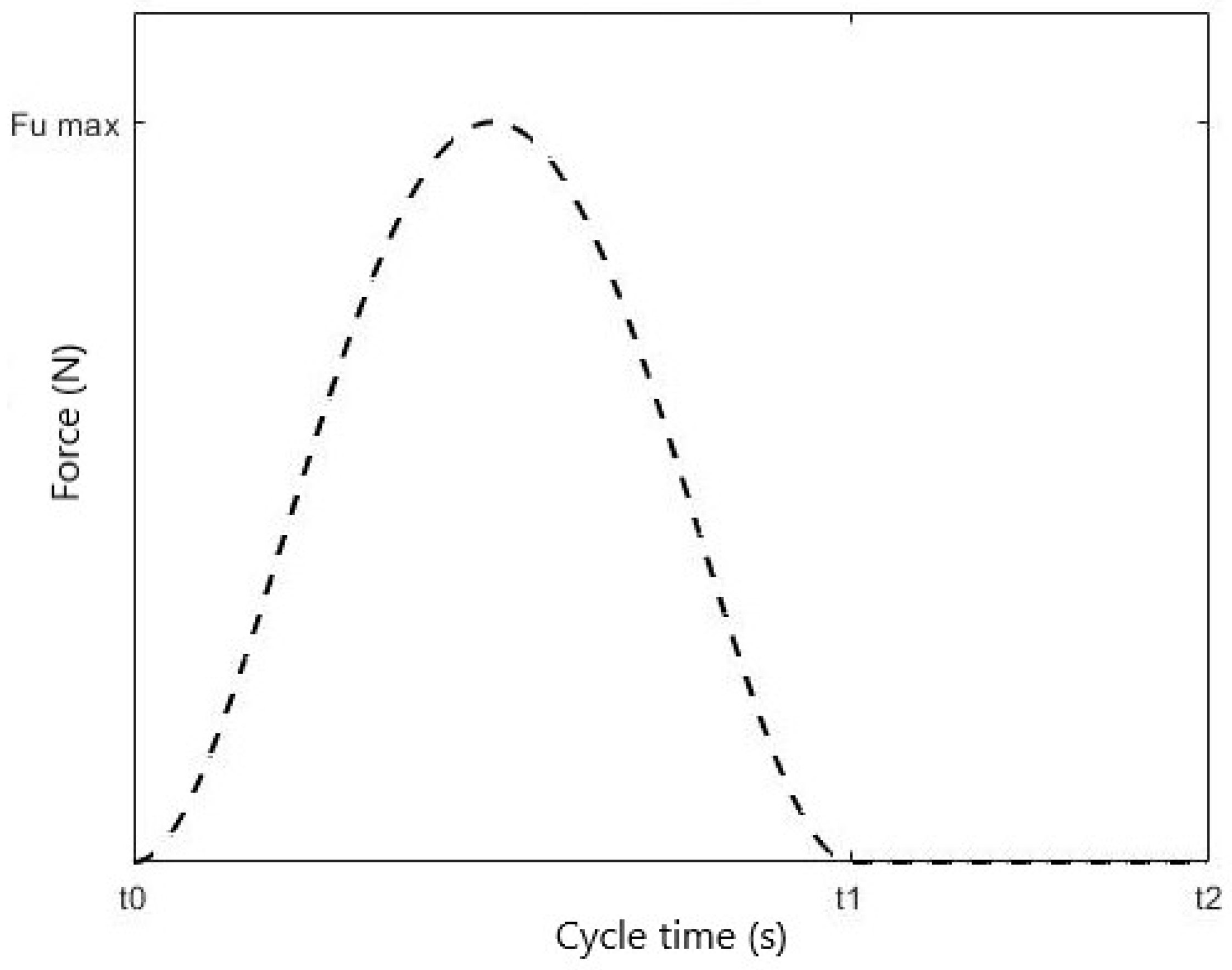 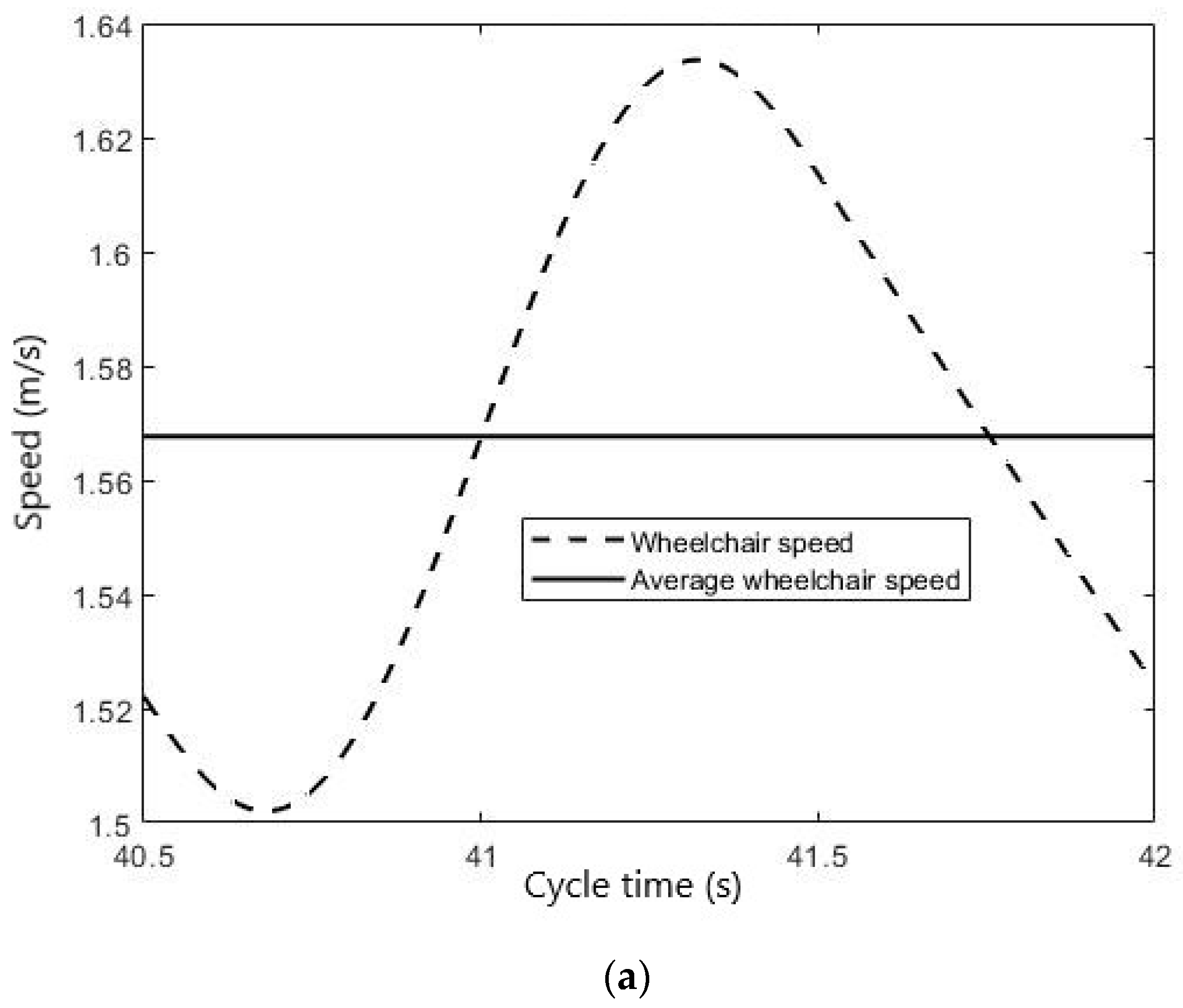 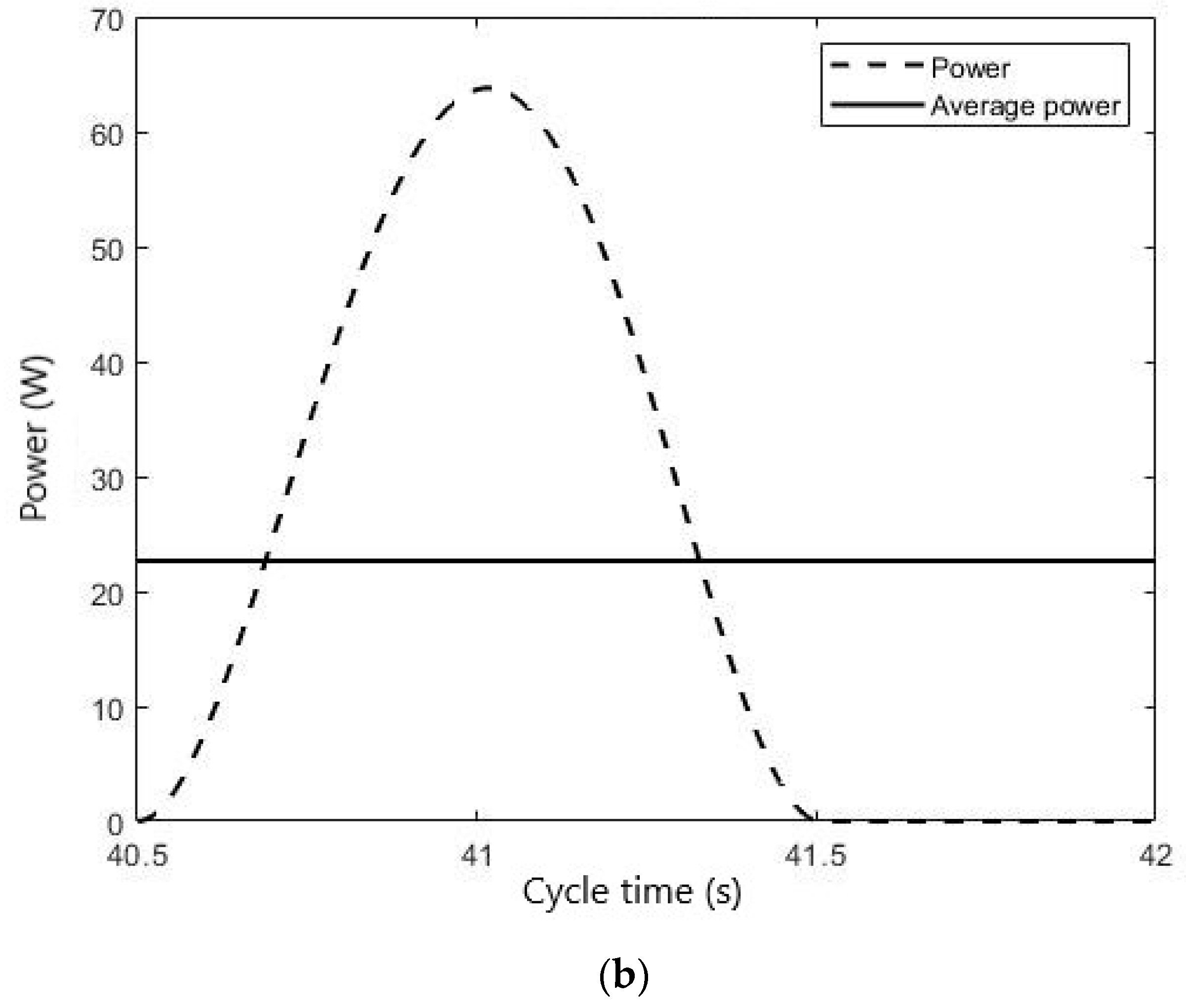 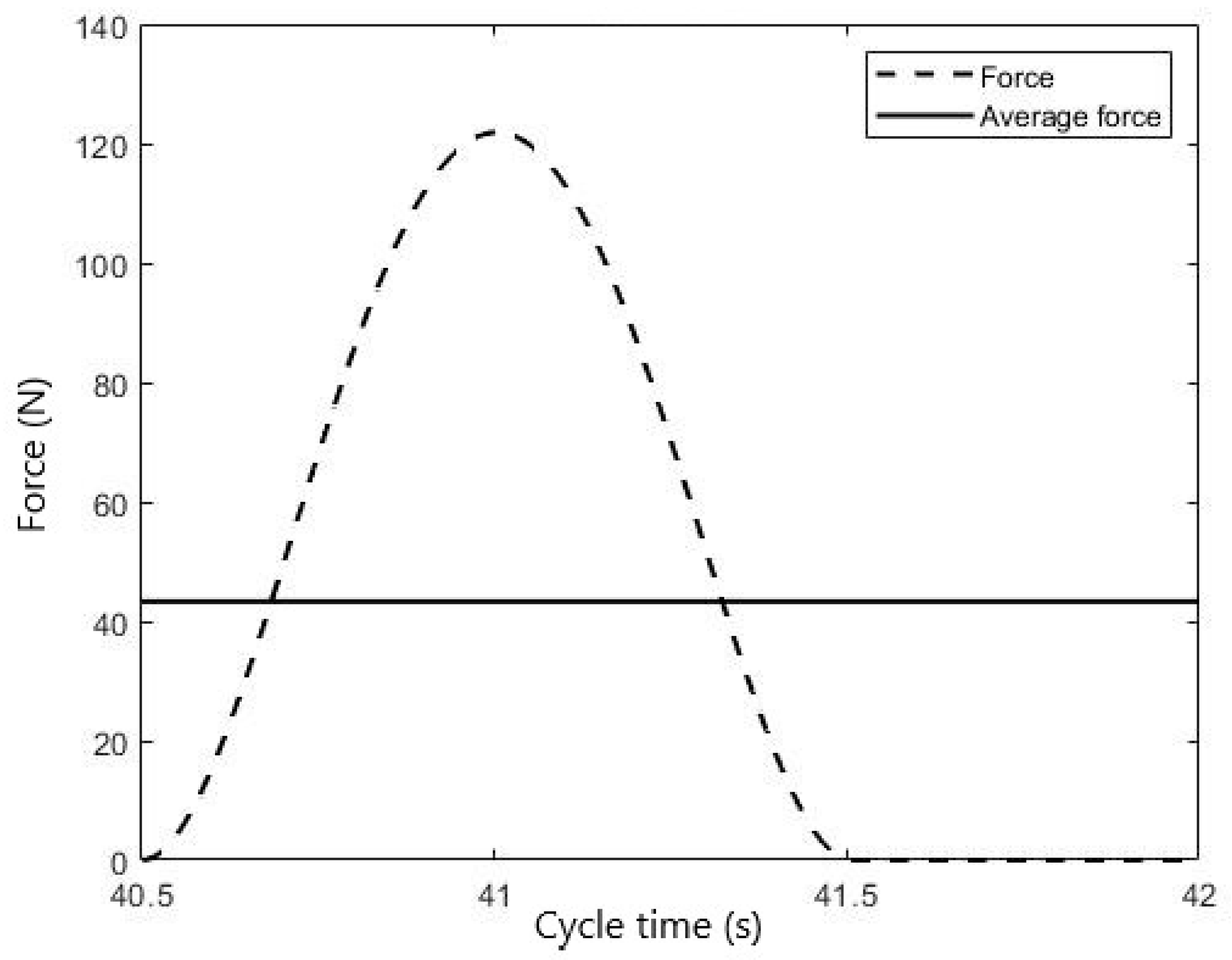 Table 4. Reference system’s dynamic model.
Table 4. Reference system’s dynamic model.
© 2019 by the authors. Licensee MDPI, Basel, Switzerland. This article is an open access article distributed under the terms and conditions of the Creative Commons Attribution (CC BY) license (http://creativecommons.org/licenses/by/4.0/).
We use cookies on our website to ensure you get the best experience. Read more about our cookies here.
Accept
We have just recently launched a new version of our website. Help us to further improve by taking part in this short 5 minute survey here. here.
Never show this again