Aristotle’s Syllogistic as a Deductive System
Previous Article in Journal

A Note on Fernández–Coniglio’s Hierarchy of Paraconsistent Systems

The concept of distribution is a concept within traditional logic that has been fundamental for the syntactic development of Sommers and Englebretsen’s term functor logic, a logic that recovers the term syntax of traditional logic. The issue here, however, is that the semantic counterpart of distribution for this logic is still in the making. Consequently, given this disparity between syntax and semantics, in this contribution we adapt some ideas of term functor logic tableaux to develop models of distribution, thus providing some alternative formal semantics to help close this breach.
Keywords: semantic tree; term logic; distribution semantic tree; term logic; distribution

The concept of distribution is a concept within traditional logic that is applied when a term appears under the scope of a universal quantifier. Thus, for example, in the proposition “All men are mortal” we say the term “men” is distributed whereas the term “mortal” is not. In spite of its simplicity, the importance of this concept is far from being overstated, given that it allows us to define rules essential to syllogistic, a term logic at the core of traditional logic; however, specially since the objections raised by Geach [1], distribution—as traditional logic—is seemingly out of favor.
Nevertheless, distribution serves a logical purpose (cf. [2,3,4,5]) that has been fundamental for the syntactic development of Sommers and Englebretsen’s term functor logic, a logic that recovers the term syntax of traditional logic [4,6,7]. The issue here, however, is that the formal semantics counterpart of distribution for this logic is still in the making. Of course, it goes without saying that Sommers and Englebretsen have already provided semantic standards for their logic, but such semantics are philosophical rather than formal, so to speak (cf. [6,8]). Consequently, given this disparity between syntax and semantics, in this contribution we adapt some ideas of term functor logic tableaux [9] to develop models of distribution, thus providing some alternative formal semantics to help close this breach.
In order to reach this goal we proceed in the following way. First we expound some preliminaries about syllogistic, distribution, and term functor logic and its tableaux; then we develop our main contribution by exploring some links between the rules of term functor logic and the concept of the model.

Syllogistic is a logic term at the core of traditional logic that deals with inference between categorical propositions. A categorical proposition is a proposition composed by two terms, a quantity, and a quality. The subject and the predicate of a proposition are called terms: the term-schema denotes the subject term of the proposition and the term-schema denotes the predicate. The quantity may be either universal (All) or particular (Some), and the quality may be either affirmative (is) or negative (is not). These categorical propositions have a type denoted by a label (either (universal affirmative, ), (universal negative, ), (particular affirmative, ), or (particular negative, )) that allows us to determine a mood, that is, a sequence of three categorical propositions ordered in such a way that the first two propositions are premises (major and minor) and the last one is a conclusion. A categorical syllogism, then, is a mood with three terms one of which appears in both premises but not in the conclusion. This particular term, usually denoted with the term-schema , works as a link between the remaining terms and is known as the middle term. According to the position of this middle term, four figures can be set up in order to encode the valid syllogistic moods (Table 1) (for sake of brevity, but without loss of generality, we omit the syllogisms that require existential import).

Now, in order to determine the validity of the previous moods we can invoke the concept of distribution since, as we mentioned before, it allows us to define rules instrumental for showing the validity of such inferences. These rules state (i) that a syllogistic inference is valid if and only if for every term , if is distributed in the conclusion, then is distributed in the premises as well; and (ii) that a syllogistic inference is valid if and only the middle term is distributed once in the premises. Thus, for instance, the following inference (Table 2) is valid since the term “dogs” is distributed in the conclusion and in the minor premise; and the middle term, “mammals,” is distributed once in the premises (at the major premise).
Previously we claimed that the concept of distribution is applied when a term appears under the scope of a universal quantifier, but the very concept of distribution is far from being clear, given that there are several accounts of it. For example, according to some medieval theories of supposition a term is said to be distributed in a proposition when such a term refers to all that it means, as when a term is under the scope of a universal quantifier. In this sense we can understand, for instance, the notion of Peter of Spain [10], who talks of distribution as multiplicatio termini communis per signum universale facta (i.e., [distribution is] the multiplication of the common term made by a universal sign (translation and emphasis are ours)) or the notion advanced by the Port-Royal tradition [11] that claims that to say that a term is distributed in a proposition is to say that such a term doit être pris universellement (i.e., must be taken universally (translation and emphasis are ours)).
Nevertheless, the notion of distribution developed by Keynes [12]—and well defended by Sommers [3] and Wilson [5], in our opinion—is probably worth mentioning, since this is the one that Geach [1] discusses. Keynes’ idea is that a term is said to be distributed when reference is made to all the items denoted by it; and it is said to be undistributed when they are only referred to partially. More formally, and following [3], we assume that a term is distributed in a proposition p in the next sense:
Hence for syllogistic we say that, given its quantity and its quality, a categorical proposition distributes its terms if and only if they have a universal quantity or a negative quality: this will be formalized in the next section with the help of term functor logic.

To better explain what we have tried to accomplish in this contribution let us wrap up what we have done. TFL’s syntax, which recovers the term syntax of syllogistic, relies on the notion of an algebraic sum that depends upon the concept of distribution (hence the use of plus and minus). In turn, the notion of an algebraic sum finds a reliable proxy in TFL tableaux. However, since TFL tableaux induce numerical interpretations, we have noticed that TFL’s semantics may rely on arithmetic, rather than algebraic, sums. The idea is, then, that the syntactic notion of algebraic sum has a correspondent notion of arithmetic sum, but since these sums are dependant upon distribution, rather than truth values, we have called these interpretations distribution models.
We think that this result, albeit simple, is worthy of exploring since it promotes the revision and revival of term logics as tools that might be more interesting and powerful than once they seemed (contra [1,24,25])). Of course, we need to check if these results hold for more general cases, but if our intuitions are correct then we have found a link between the algebraic rules of term functor logic and a natural interpretation or model of TFL in terms of arithmetic sums. We believe, thus, that by assuming the traditional stance of distribution we still can obtain interesting results. We still are, as Sommers once said, friends of distribution.

This research was funded by an UPAEP Research Grant.

We would like to thank the referees for valuable comments and suggestions. 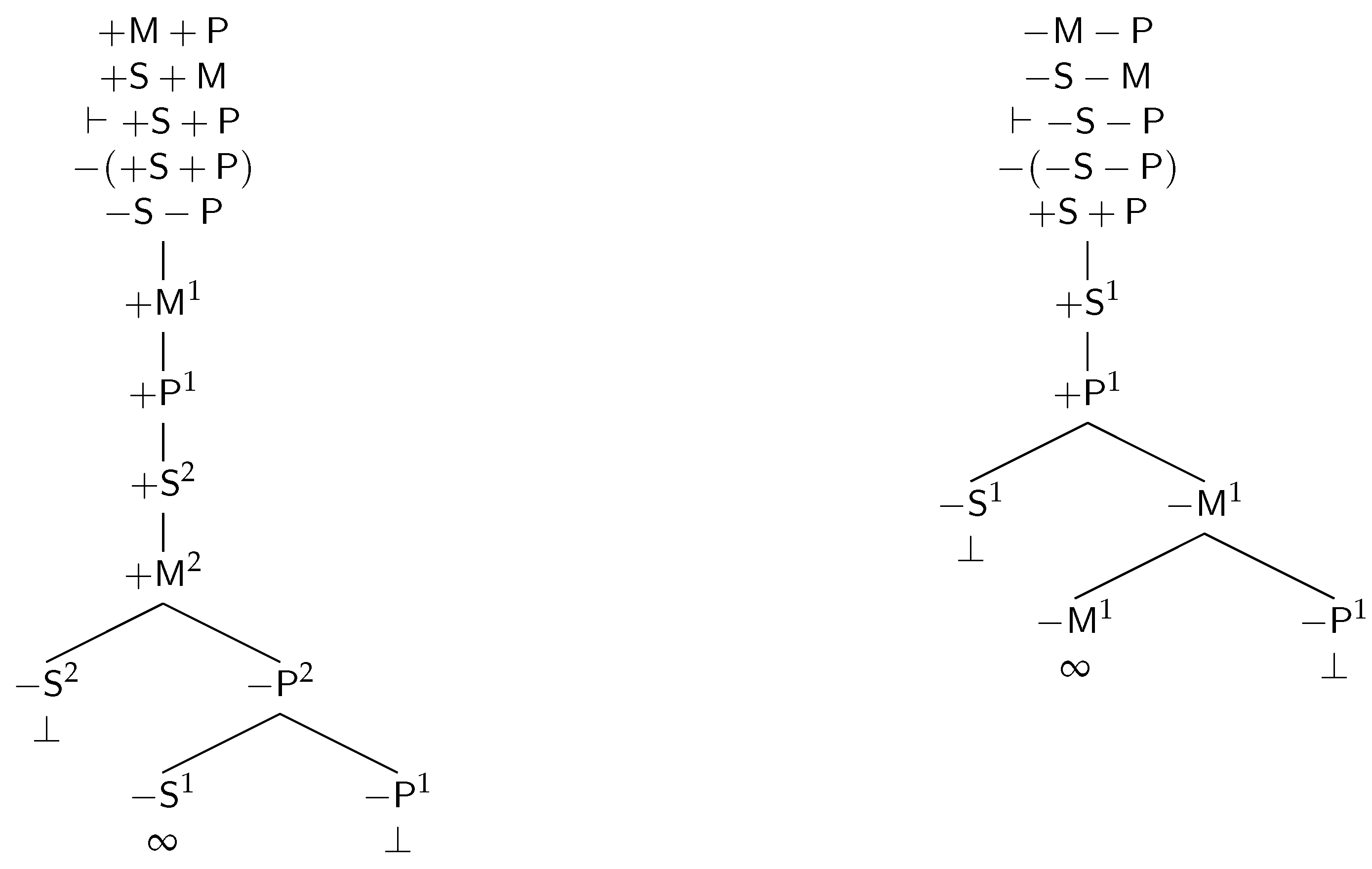 Table 5. An interpretation of -1.
Table 5. An interpretation of -1.
© 2020 by the author. Licensee MDPI, Basel, Switzerland. This article is an open access article distributed under the terms and conditions of the Creative Commons Attribution (CC BY) license (http://creativecommons.org/licenses/by/4.0/).
We use cookies on our website to ensure you get the best experience. Read more about our cookies here.
Accept
We have just recently launched a new version of our website. Help us to further improve by taking part in this short 5 minute survey here. here.
Never show this again