Linear and nonlinear phenomena are a fundamental part of science and construction. Nonlinear equations are seen in an alternative way when dealing with physical problems such as liquid elements, plasma material science, strong mechanics, quantum field hypotheses, the proliferation of shallow water waves, and numerous other models, all of which are to found within the field of incomplete differential equations. The wide use of these equations is the key to why they have drawn the attention of mathematicians. Regardless of this, they are difficult to solve, either numerically or theoretically. Previously, dynamic examinations were much examined for the potential of finding exact or approximate solutions to these sorts of equations [1,2].
In the recent years, the area of FIDEs has developed a lot and plays a key role in the field of engineering. The elementary impression and arithmetic of fuzzy sets were first introduced by Zadeh. Later, the area of fuzzy derivative and fuzzy integration was studied, and some general results were developed. Fuzzy differential equations (FDEs) and FIDEs are very important in the study of fuzzy theory and have many beneficial consequences related to different problems. Modeling of different physical systems in the differential way gives us different FIDEs [2,3]. Furthermore, FIDEs in a fuzzy setting are a natural way to model the ambiguity of dynamic systems. Consequently, different scientific fields, such as physics, geography, medicine, and biology, pay much importance to the solution of different FIDEs. Solutions to these equations can be utilized in different engineering problems. Seikkala first defined fuzzy derivatives, while the concept of integration of fuzzy functions was first introduced by Dubois and Prade. However, analytic solutions to nonlinear FIDE types are often difficult to find. Therefore, most of the time, an approximate solution is required. There are also useful numerical schemes that can produce a numerical approximation to solutions for some problems [4,5].
The literature on numerical solutions of integro-differential equations (IDEs) is vast. We used the Sumudu decomposition method [6,7,8] to solve linear and nonlinear fuzzy integral equations (FIEs). The method gives more realistic series solutions that converge very rapidly in physical problems. Sumudu transforms are also used for solving IDEs, which can be seen in [4,5]. IDEs are transforms to FIDEs that are more general and give better results. After applying a Sumudu transform, a decomposition method is used for the approximate solution [8,9].

Fuzzy Number
A fuzzy number is a generalization of a regular, real number in the sense that it does not refer to one single value but rather to a connected set of possible values, where each possible value has its own weight between 0 and 1. This weight is called the membership function.
Let E be the set of all fuzzy numbers which upper semicontinuous and compact. The level set where is the collection of fuzzy numbers, , is defined as:
The set E is convex if .
If such that then E becomes normal. E is said to be upper semicontinuous if for every , is open in the typical topology of R [12,13].
Absolute value of is defined as:
Consider the mapping defined as: where:
Then, is a metric on satisfying the properties:
Definition 1.
Letbe a fuzzy valued function, thenis continuous if forand for eachthere existssuch that:
Definition 2.
Letbe a fuzzy valued function and, thenis differentiable at. Ifsuch that:

Consider a Volterra integro-differential equation:
By taking sumudu transform on Equation (6), we have:
This will give us:
Note that:
Thus, we have:
The following cases can be discussed:

Exploring Case (i), we can see that is remains are same.
After simplification, (11) and (12) become:
After simplification:
Equations (15) and (16) give us:
By taking the inverse Sumudu transforms, we can get the value of and .
Now, using the decomposition method: and: we can write as:
Similarly:
For nonlinear equations, we use the adomian polynomials:
Then, Equation (B) becomes:

Usually, it is difficult to solve fuzzy integro-differential equations analytically. Most probably, it is required to obtain the approximate solutions. In this paper, we developed a numerical technique (Sumudu decomposition method) to find the solution to linear and nonlinear fuzzy Volterra integro-differential equations. A general method for solving VIDE was developed. This technique proved reliable and effective based on the achieved results. It gives fast convergence because by utilizing a lower number of iterations, we get approximate as well as exact solutions.

The problem was proposed by S.M.K. The results were proven and the paper was drafted by Z.I. M.H. supervised this work, and W.N. verified and analyzed the results.

Funding is not available for this research. 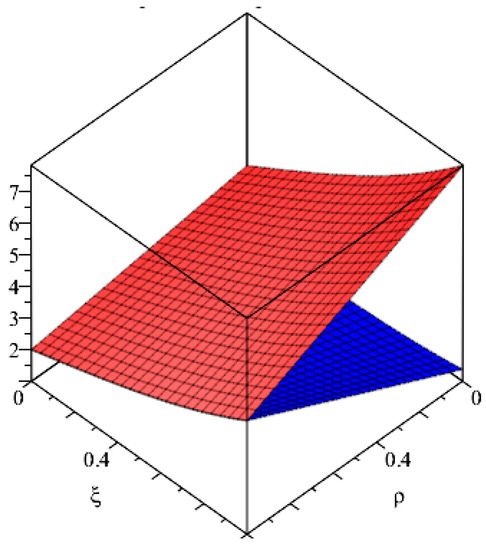