(K,Na)2[AsB6O12]2[B3O3(OH)3], a New Microporous Material, and Its Comparison to Teruggite
Previous Article in Journal

Metamorphic Age Comparison and Its Implications between the Zuoquan and Zanhuang Complexes in the Central North China Craton, Based on LA-ICP-MS Zircon U–Pb Dating

The Trans-North China Orogen (TNCO) is well-known as an early Precambrian orogenic belt in the North China Craton (NCC). Three meaningful groups of metamorphic ages have been reported in the metamorphic complexes throughout the TNCO, including c. 1.85 Ga, c. 1.95 Ga, and c. 2.5 Ga. The spatial distributions and relationships of these ages provide notable insight into the formation timing and tectonic evolution of the NCC basement. The Zuoquan and Zanhuang complexes are exposed in the south–central TNCO and are adjacent to the Eastern Block. In order to place new constraints on the timing of two phases of metamorphism that occurred in the complexes, combined U–Pb and rare earth element analyses were performed on zircons from different types of metamorphic rocks. Uranium–Pb zircon dating in this study shows that two groups of metamorphic ages of 1.88–1.85 Ga and 2.48–2.46 Ga were commonly recorded by metamorphic rocks in the Zanhuang and Zuoquan complexes, respectively. Our previous geochronological studies showed that metamorphic ages of c. 2.51 Ga and c. 1.90 Ga were locally recorded in the Zanhuang and Zuoquan complexes, respectively. These data indicate that metamorphic rocks in the two complexes underwent at least two phases of metamorphism, i.e., 2.51–2.46 Ga (Phase I) and 1.90–1.85 Ga (Phase II). In combination with previous studies regarding reaction microstructures, metamorphic pressure–temperature paths, and geochronology, the Phase II metamorphic ages are interpreted to be linked to the collision between the Western and Eastern Blocks along the TNCO between 1.97 Ga and 1.80 Ga, whereas the Phase I metamorphic ages, as a result of an earlier and extensive tectono-thermal event that occurred in the Eastern and Western Blocks of the NCC, were related to underplating of mantle-derived magma. It is inferred that the rocks with c. 2.51–2.46 Ga metamorphic ages in the two complexes formed in the Eastern Block and underwent regional metamorphism during that period, and then were tectonically involved in the TNCO and experienced c. 1.90–1.85 Ga metamorphism. Metamorphic peaks occurred at different crustal levels in the orogen, resulting in distinct metamorphic ages and peak conditions preserved by metamorphic rocks in the two complexes. View Full-Text
Keywords: zircon LA-ICP-MS; Zuoquan; Zanhuang; Trans-North China Orogen; North China Craton zircon LA-ICP-MS; Zuoquan; Zanhuang; Trans-North China Orogen; North China Craton
►▼ Show Figures 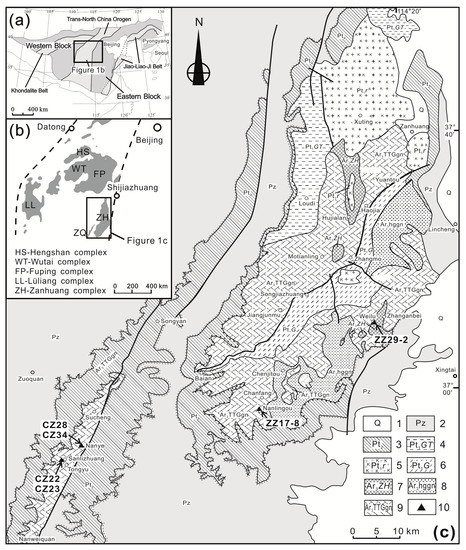