Rare earth elements (REE) are considered to be a critical resource, because of their importance in green energy applications and the overdependence on Chinese imports. REE rich ion-adsorption deposits (IAD) result from tropical weathering of REE enriched igneous rocks. Commercial REE leaching from IAD, using salt solutions occurs via an ion-exchange mechanism. Bioleaching of IAD by Aspergillus or Bacillus, was compared to Uninoculated Control and Salt leaching (0.5 M ammonium sulfate) over 60 days. Salt leaching was most effective, followed by Aspergillus, Bacillus then Uninoculated Control. Most of the REE and major elements released by Salt leaching occurred before day 3. With bioleaching, REE and major elements release increased with time and had a greater heavy to light REE ratio. Similar total heavy REE release was observed in Salt leaching and Aspergillus (73.1% and 70.7% Lu respectively). In bioleaching experiments, pH was inversely correlated with REE release (R2 = 0.947 for Lu) indicating leaching by microbially produced acids. These experiments show the potential for bioleaching of REE from IAD, but dissolution of undesirable elements could cause problems in downstream processing. Further understanding of the bioleaching mechanisms could lead to optimization of REE recovery. View Full-Text
Keywords: rare earth elements; laterite; heterotrophic bioleaching; biomining; Aspergillus; Bacillus; Madagascar rare earth elements; laterite; heterotrophic bioleaching; biomining; Aspergillus; Bacillus; Madagascar
►▼ Show Figures 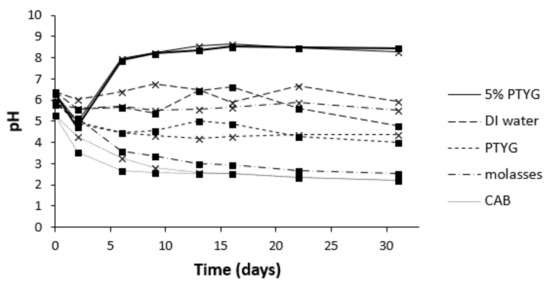