Microorganisms play an important role in weathering sulfide minerals worldwide and thrive in metal-rich and extremely acidic environments in acid mine drainage (AMD). Advanced molecular methods provide in-depth information on the microbial diversity and community dynamics in the AMD-generating environment. Although the diversity is relatively low and in general inversely correlated with the acidity, a considerable number of microbial species have been detected and described in AMD ecosystems. The acidophilic microbial communities dominated by iron/sulfur-oxidizing microbes vary widely in their composition and structure across diverse environmental gradients. Environmental conditions affect the microbial community assembly via direct and indirect interactions with microbes, resulting in an environmentally dependent biogeographic pattern. This article summarizes the latest studies to provide a better understanding of the microbial biodiversity and community assembly in AMD environments.
Keywords: acid mine drainage; acidophilic microorganism; molecular method; microbial diversity; community assembly acid mine drainage; acidophilic microorganism; molecular method; microbial diversity; community assembly

Acid mine drainage (AMD) is a widespread environmental problem caused by the oxidative dissolution of metal sulfide minerals [1]. Tailings from mining for metals such as Fe, Cu, Pb, and Zn often contain a high amount of sulfide minerals (mainly pyrite) and during weathering release high amounts of metals, sulfate, and protons in mine drainages [2,3]. Increasing evidence demonstrates that a considerable number of microorganisms can survive in AMD and perform essential ecological functions [4,5]. In the last few decades, iron- and/or sulfur-oxidizing microbes have been extensively studied based on isolation and cultivation methods and are demonstrated as the main contributors in AMD generation [6,7,8,9,10]. The few species utilizing sulfide minerals greatly increase the primary production in the ecosystem, providing a basis for the growth of heterotrophic microbes [11]. Yet the fact that many species cannot be cultured implies difficulty in comprehensive understanding about the microflora in AMD ecosystems [12,13].
During the acidification of pyrite-rich tailings, remarkable environmental gradients are locally produced in terms of pH, dissolved oxygen (DO), electrical conductivity (EC), and concentrations of metals and sulfate [14,15,16]. In AMD ecosystems, the microbial communities respond to these environmental variations because microbes vary widely in their ability to cope with extreme environmental conditions [17,18]. Understanding how the microbial community composition and structure change along such gradients is a vital challenge for researchers to describe and predict the biogeochemical cycles in AMD systems [19]. The generally high complexity of microbial communities limited the application of ecological theories derived from higher organisms such as plants and animals to microbes [13,20]. However, the simplicity of microbial assemblages and geochemical features in extreme acidic conditions (pH < 4.0) makes the AMD system an intelligible model for the quantitative analyses of community diversity, dynamics, and distribution pattern of acidophiles [21,22,23].
Newly developed, high-throughput molecular technologies provide an opportunity for the cultivation-independent analysis of the microbial community composition and structure in extreme environments [14,24,25]. Integrating the microbial and geochemical data offers a better understanding of the underlying dynamics of microbial community assembly [12,26]. In the past few years, the variations in community structure and function in response to environmental conditions have been investigated in AMD settings [25,27,28]. In addition, the taxonomic and functional distributions of microbial communities have been explored associating with both the environmental heterogeneity and spatial gradients [24,29], providing an insightful view about the biogeographic pattern of microbial communities in AMD ecosystems. Such in-depth understanding of the microbial community assembly also benefits the applications in bioleaching and bioremediation of abandoned mine tailings [30,31].
Both taxonomy-based and trait-based research has greatly extended our knowledge on the factors affecting microbial community in AMD systems. Here, we summarize our current understanding about the microbial diversity and illustrate how microbial community assembly is affected, that is, how microbial communities vary along diverse environmental gradients in AMD-generating environments.

AMD can be rapidly generated when metal sulfide-containing materials are brought out to the Earth’s surface and exposed to moisture and air [32]. Microorganisms can directly or indirectly utilize inorganic minerals as electron donors and irreversibly alter the physical conditions of the environments [33,34]. Pyrite (FeS2) is the most abundant sulfide mineral on Earth and is an important player in the generation of mine drainage, as indicated by the following equations [6,35]:
FeS2 + 6Fe3+ + 3H2O → 7Fe2+ + S2O32− + 6H+
6Fe2+ + 1.5O2 + 6H+ → 6Fe3+ + 3H2O
S2O32− + 2O2 + H2O → 2H+ + 2SO42−
Upon exposure to water and oxygen, the rate of abiotic oxidation of pyrite is low (Equation (1)), but can be greatly accelerated in the presence of certain microbes such as chemoautotrophic bacteria and archaea that mediate the oxidation of reduced iron in the pyrite (Equation (2)) [6]. Owing to the increased concentration of Fe3+, the pyrite is sustainably dissolved, driving the primary production of mine drainage [21,34]. Thiosulfate, produced by pyrite oxidation at the original stage (with high ambient pH), can then also be oxidized by some bacteria and archaea (Equation (3)) [6]. The overall result of these reactions is an accumulation of protons, sulfate, and dissolved metals, resulting in an extreme environment for life.
During the microbial-mediated oxidation of sulfide minerals, both bacteria and archaea are involved [36,37]. The most extensively studied taxa of bacteria in previous studies are chemoautotrophic Acidithiobacillus spp. and Leptospirillum spp., which are generally recognized as the ringleader of the AMD problem [38,39]. Sulfur-oxidizing Thiobacillus spp. and archaeal iron-oxidizing Ferroplasma spp. have also been reported frequently as dominant members in some mining environments [40,41]. Based on the growth of autotrophs, mixotrophs, and heterotrophs, Sulfobacillus spp. and Acidiphilium spp. also thrive in AMD environments and influence the oxidation of pyrite, greatly increasing the diversity of microbial communities [34,42]. To date, the dominant lineages detected in AMD environments are Proteobacteria, Nitrospira, Actinobacteria, Firmicutes, Acidobacteria, Aquificae in bacteria and Euryarchaeota, Crenarchaeota in archaea, as summarized by Chen et al. [22]. More than 100 known genera have been detected in extreme AMD-generating conditions in South China, revealing a considerable microbial diversity in these environments (Figure 1). Except for several dominant species directly related to iron/sulfur-oxidizing, a large number of rare taxa constitute a “rare biosphere” in the community and may perform a crucial function in AMD ecosystems [28,43]. Although a large number of the observed operational taxonomic units (OTUs) cannot be classified into a specific genus, advanced high-throughput sequencing approaches offer more comprehensive information about the microbial community than traditional cultivation methods [44,45].

In AMD ecosystems, the microbial oxidation of iron and sulfur are vital geochemical processes producing Fe3+ and SO42−, which can be further utilized by microbes at higher trophic levels. Meanwhile, under specific environmental conditions, sulfate-reducing bacteria (SRB) and iron-reducing bacteria (IRB) can reduce Fe3+ and SO42−, completing the iron and sulfur cycles in such ecosystems [46]. The nitrogen cycle is also critical for the microbial community because the resource of nitrogen is usually limited in AMD environments [1]. However, based on a transcriptional analysis, Hua et al. found that the nifH gene encoding enzymes involved in nitrogen fixation was highly expressed in rare taxa, suggesting that rare species likely perform essential ecological functions in AMD biogeochemistry [28].
In generating AMD, the dissolving of sulfide minerals by associated microbes decreases the solution pH and releases a high amount of metals. To date, several attempts have been made to investigate the microbial community dynamics related to the acidification process of the mine tailings [14,25,47]. Remarkable shifts in microbial community composition and structure have been found at different oxidation stages, most likely due to the distinct environmental gradients produced during AMD generation [48,49,50]. For example, according to the result of a simulated experiment of oxidative dissolution of pyrite, the most dominant genera were Tumebacillus, Alicyclobacillus, and Ferroplasma at the early, mid, and final stage, respectively [47]. A detailed microbial community investigation in a natural AMD-generating environment indicated that the key species involved in different acidification stages varied greatly, and the relative abundances of most dominant lineages were significantly correlated with acidity [25]. In many studies, archaea (mostly Ferroplasma spp.) were found to be predominant at the late oxidation stage, which was usually characterized by low pH (<3.0) and a high concentration of metals [47,49,50], revealing their favorable adaptation of harsh environmental conditions and indispensability in such ecosystems [51]. Metagenomic as well as transcriptomic analyses deciphered significant variations in microbial community function [27,52,53]. For example, previous metagenomics study of tailings acidification showed that the sulfur oxidation was mainly performed by Thiobacillus at the early stage and by Acidithiobacillus at the late stage [50].
The overall alpha-diversity of the microbial community was widely observed to significantly relate to the acidification process. Liu et al. investigated the microbial communities in filed mine tailings at different acidification stages (pH range 2.0–7.0) and described a strong correlation between the pH and the diversity of microbes including the number of phylotypes and phylogenetic diversity (PD) [25]. This gradual decrease of microbial diversity during the acidification of mine tailings was also found in other studies of natural AMD environments [29,48,54], possibly owing to the stronger selective pressure on microorganisms. Chen et al. conducted simulated acidification experiments on pyrite in a laboratory to study the temporal succession of microbial communities at different oxidation stages [47]. The microbial diversity characterized by both the community richness indices (observed OTUs, PD) and the community diversity indices (Shannon, Simpson) had no significant decrease until the conditions were below pH 3.0 (Figure 2a–d). Particularly, the results of the Simpson index were subject to the intermediate species-richness hypothesis, which has been widely studied by ecologists about the community succession, revealing a flourish of microbes at the mid stage (Figure 2d) [55,56]. In summary, microbial-mediated AMD generation results in a low alpha-diversity of microbial community at the late stage.
Although the oxidative dissolution of sulfide minerals gradually decreases the solution pH, some microbial-mediated reactions such as the chemoautotrophic sulfate reduction and nitrate reduction can consume protons and elevate the pH value, as indicated by the following equations:
SO42− + 8e− + 10H+ → H2S + 4H2O
2NO3− + 10e− + 12H+ → N2 + 6H2O
Therefore, in a specific AMD ecosystem, the microbial community, pH value, and other environmental parameters fluctuate seasonally, influenced by outside environmental changes such as temperature [10,16]. In brief, the microbial activities in AMD markedly affect the environmental conditions, and in turn, environmental gradients over time and space shape the microbial diversity and community assembly.

Advanced high-throughput molecular approaches such as 16S rRNA gene sequencing, metagenomic and metatranscriptomic profiling, and functional genes microarray provide a route to phylogenetic and functional insight of the microbial community without the requirement for laboratory cultivation [28,29]. The recent efforts significantly increased our knowledge of the microbial diversity and community function in AMD ecosystems [29,47]. In this short review, we demonstrated the variation of microbial diversity, ecological function, and community structure in AMD formation, leading to a discussion of relationships between the environmental gradients and the microbial community assembly. The microbial-related ecological process is vitally important to AMD biogeochemistry. However, the reduction process of iron and sulfate, which can be utilized in the bioremediation of AMD, remain largely unexplored [70]. Moreover, eukaryotes such as fungi, protists, and algae can greatly impact the growth of bacteria and archaea and regulate AMD generation rates [27,71]. Yet, they are generally not discussed in large-scale microbial community investigations due to the lack of a common gene marker. Further efforts should include both prokaryotes and eukaryotes to arrive at a more integrated view of the AMD ecosystem. 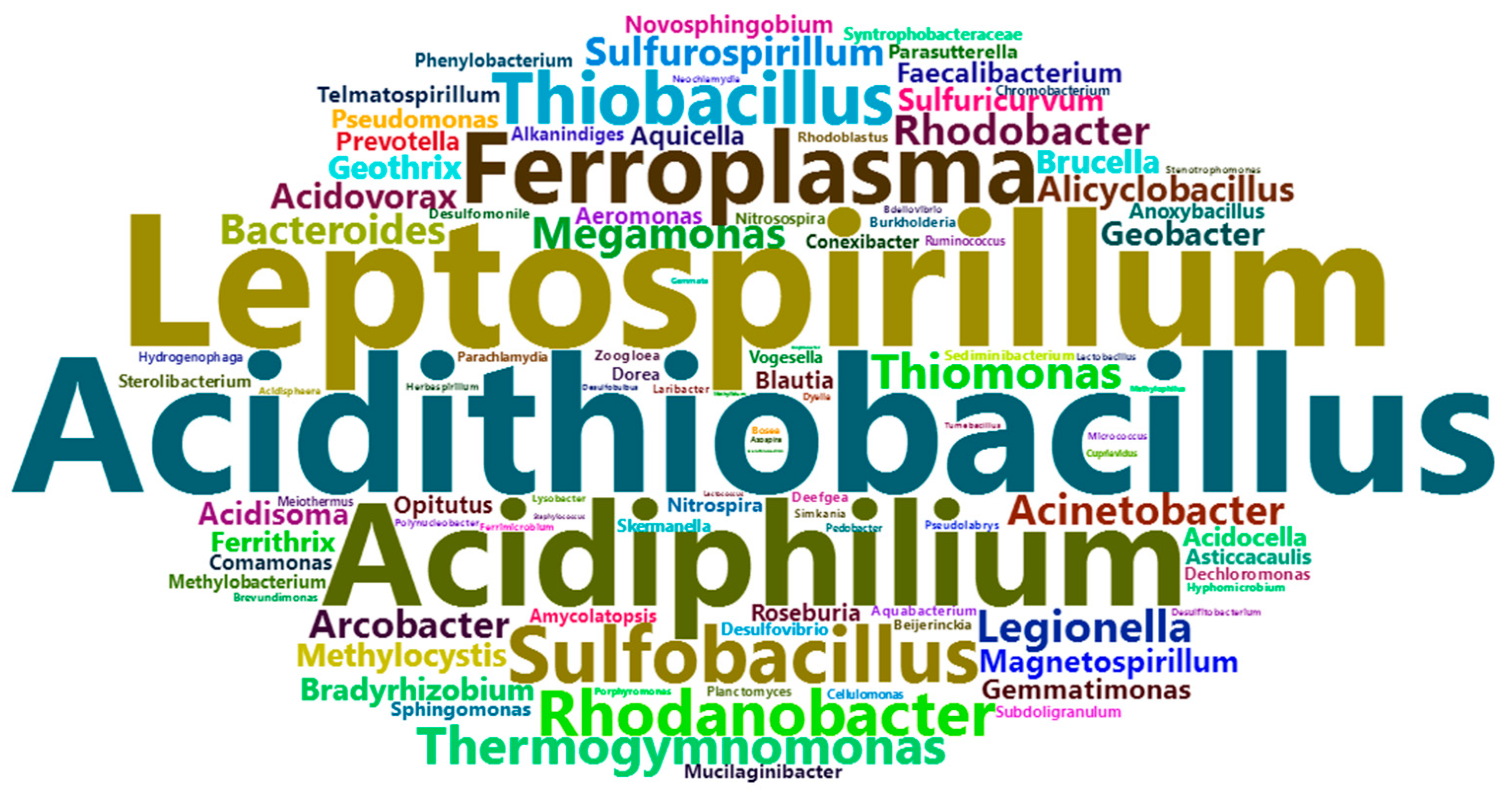 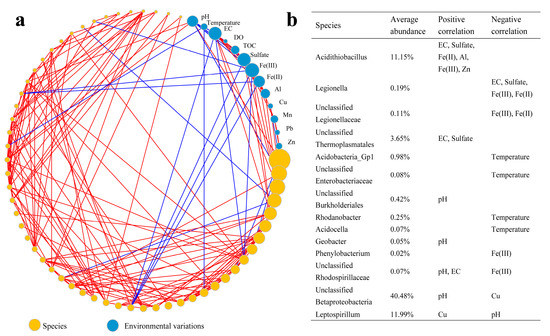