In this paper, the extraction of vanadium from stone coal by roasting with MgO and leaching with sulfuric acid has been investigated, and the mechanism analysis of stone coal roasting with MgO was studied. The results indicated that under the conditions that the mass fraction of the particles with grain size of 0–0.074 mm in raw ore was 75%, the roasting temperature was 500 °C, the roasting time was 1 h, MgO addition was 3 wt %, the sulfuric acid concentration was 20 vol %, the liquid-to-solid ratio was 1.5 mL/g, the leaching temperature was 95 °C, and leaching time was 2 h, resulting in a vanadium leaching efficiency of 86.63%, which increased by 7.73% compared with that of blank roasting. The mechanism analysis showed that the degree of calcite decomposition was low and, thus, magnesium vanadate was more easily formed than calcium vanadate below 500 °C. Moreover, magnesium vanadate was easier to dissolve than calcium vanadate during the sulfuric acid leaching process. Thus, the vanadium leaching efficiency was enhanced by using MgO as a roasting additive below 500 °C. Additionally, at high temperature the formation of tremolite would consume calcium oxide produced from the decomposition of calcite, thus, the formation of calcium vanadate was hindered, and V2O5 would react with MgO to form magnesium vanadate. Therefore, the vanadium leaching efficiency of roasting with MgO was higher than that of blank roasting at high temperature. View Full-Text
Keywords: stone coal; vanadium; MgO; mechanism analysis stone coal; vanadium; MgO; mechanism analysis
►▼ Show Figures 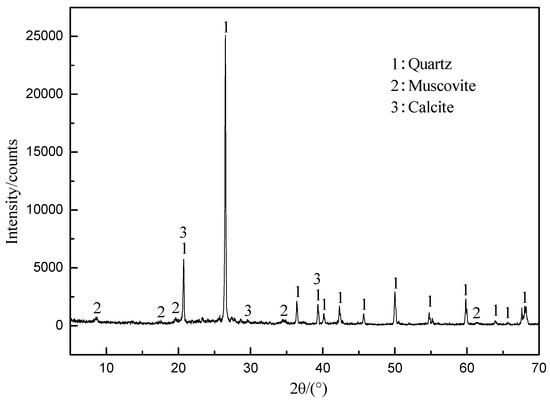