Flotability Improvement of Ilmenite Using Attrition-Scrubbing as a Pretreatment Method

Selective Separation of Fluorite, Barite and Calcite with Valonea Extract and Sodium Fluosilicate as Depressants

There are more than 30 million tons of fluorite and 25 million tons of barite resources in the Wulin Mountain area of China. Among them, about 90% of the fluorite is associated with barite, and the proportion of fluorite and barite in the ore is approximately 90%. Other impurity minerals consist of mainly calcite and silicate [1]. Large quantities of this type of ore exist in other places throughout the world. However, flotation separation of fluorite, barite and calcite is difficult, due to their similar surface properties and narrow differences in floatability [2].
Calcite and fluorite can be separated by the adsorption-washing-flotation method using sodium dodecyl sulphate as collector [3]. The acid-grade fluorite concentrates can be obtained with oleoylsarcosine as a collector and quebracho depressant at pH 8–9 from ores containing more than 6% calcite [4]. Giesekke and Harris found that fluorite could be floated using a single bubble-stream microflotation cell with sodium oleate as the collector and wattle-bark extract as the depressant [5]. However, these methods are not suitable for ores containing barite.
Many researchers have come to the consensus that selecting the proper depressant is crucial for the selective flotation recovery of these three minerals [2]. Depressants, such as acidized sodium silicate [6,7], modified sodium silicate [8] and sodium hexametaphosphate with salified sodium silicate [9], have been used to depress calcite. Sodium silicate, sodium hexametaphosphate, sodium fluosilicate [10], dextrin [11,12] and aluminium sulphate [13] have been used to depress barite. However, a systematic study on the effects of depressants on the flotability of fluorite, barite and calcite has not been reported in the literature, and an efficient depressant for the selective flotation separation of these three minerals is still unavailable.
The objective of this study is to investigate the effects of valonea extract and sodium fluosilicate on the flotation separation of fluorite, barite and calcite. The mechanism of the selective separation was investigated through zeta potential measurements. The results are discussed using a molecular dynamics (MD) simulation to verify experimental results using theoretical computations.

Pure fluorite, barite and calcite were from Chongqing, China. Their chemical compositions were determined using an X-ray fluorescence spectrometer (XRF) (Axios advanced, PANalytical B.V., Almelo, The Netherlands) and are summarized in Table 1.
As shown in Table 1, the CaF2 content of fluorite was 97.25%; the BaSO4 content of barite was 97.02%; and the CaCO3 content of calcite was 97.50%. The −150 μm +74 μm fraction was used in the flotation tests. The −74 μm fraction was removed in the case of fine particle entrainment. Some samples were further ground to −10 μm in an agate mortar and were used for zeta potential measurements. The mixed minerals were obtained by blending the pure fluorite, barite and calcite with a mass ratio of 45:45:10.
The chemical reagents used in this study included: analytical-grade sodium carbonate (Na2CO3, Hongguang Chemical Factory, Shanghai, China) and analytical-grade sulfuric acid (H2SO4, Dongda Chemical Co., Ltd., Kaifeng, China) for pH adjustment; analytical-grade hydrochloric acid (HCl, Xinyang, China) for the analysis of calcite content; analytical-grade sodium oleate as the collector and boric acid (H3BO3, Chinese medicine group chemical reagent Co., Ltd., Shanghai, China) for the analysis of barite content; analytical-grade sodium fluosilicate (Zonghengxing Gongmao Co., Ltd., Tianjin, China); and technical-grade valonea extract from a valonea extract factory for depressants. Valonea extract was a polyphenol mixture that mainly consisted of different types of tannins [14]. The typical molecule structure of tannin in the valonea extract is shown in Figure 1.

Before standing for 2 h, mineral suspensions containing 0.1% solids and a given flotation reagent concentration were conditioned in an ultrasonic bath for 2 min. The zeta potentials of the upper suspended solids at different pH values were conducted at 20 °C using a 90 Plus Particle Size Analyzer (Brookhaven Instruments Corporation, Holtsville, NY, USA).

The calculations were performed in the framework of the MD, using the Material Studio 6.0 (MS) package. First, the Cambridge Sequential Total Energy Package (CASTEP) module included in the MS software was adopted to optimize the crystal structures of fluorite, barite and calcite. By comparing different parameters to be optimized, the best optimization parameters were as follows: a function was modified with Perdew–Burke–Ernzerhof generalized gradient approximation (PBEsol GGA); the k-point set was 3 × 3 × 4; the self-consistent-field (SCF) tolerance was 1.0 × 10−6 eV/atom; and the custom energy cut-off was 300 eV. The lattice optimization results are shown in Table 2. It is encouraging to note that the simulation agreed well with the experimental results analysed from X-ray experiments. Then, 2D periodic surface cells were created from the unit cells of fluorite, barite and calcite at the cleavage plane (111), (001) and (104), respectively. The optimized surface slab was extended to a periodic super lattice of approximately 20 Å × 20 Å with a certain vacuum thickness of 30 Å [15].
Second, the tannin, sodium fluosilicate and water molecule were optimized using the DMol3 module. The optimization parameters are as follows: the quality was medium, and the functional was a local spin density approximation with the Perdew–Wang correlation (LDA/PWC). A symmetry calculation was performed.
Finally, the DISCOVER module was employed to calculate adsorption energies. Tannin, the main component of valonea extract, and sodium fluosilicate were used as adsorbates. The optimized adsorbate molecules were placed on the top mineral surface, while the bottom-most layers were kept frozen. The initial geometry of the mineral surface-adsorbate molecule complex was created with the help of molecular graphics tools. First, the geometry optimization of the system of reagent-mineral was conducted using a Smart Minimizer with the COMPASS force field [16], and the atom-based cut-off method was employed for calculating both the van der Waals and electrostatic interactions (Coulombic) [15]. The atom-based cut-offs were used with a 9.5 Å cut-off distance, which was less than half of the length of the simulation cell [15,17] with a spline width of 1.0 Å and a buffer width of 0.5 Å. Because the configuration obtained with this method was only one of the possible adsorption modes, approximately 20 starting conformations were assessed in order to locate the minimum energy conformation of the molecule on the mineral surface. The most stable configuration of mineral surface-surfactant complex with the highest negative total energy was chosen for further MD simulations, and the coordinates of surface atoms were constrained during the MD simulations with the adsorbates being free [15].
In the current formulation, it was difficult to account for the effect of aqueous environments on mineral-reagent interactions [18]. Solvent (water) molecules were not included in the simulations, but the interaction energy of water molecules for each mineral surface was computed and compared with the corresponding adsorbate-mineral interaction energy [15].
MD simulations were conducted with the COMPASS force field. The settings were the same as the geometry optimization procedure. All simulations were performed at constant volume and temperature (NVT). The time step was 1.0 fs, and the total run length was 300 ps. Finally, the interaction energy was calculated using the following equation [18,19]:
Ei = Et − (Em + Er)
where Et, Em and Er are the total energy of the optimized reagent-mineral complex, surface cluster and reagent molecule, respectively [17]. More negative magnitudes of interaction energy (Ei) correspond to more favourable interactions between the mineral surface and the depressants. The magnitude of Ei is thus an excellent measure of the relative efficiency of interaction of different collectors with minerals [20].

The flotation recoveries of three minerals with valonea extract are shown in Figure 4. With the increase in valonea extract dosage, the flotation recoveries of all three minerals decreased. Obviously, the depressing effect on calcite flotation was the strongest, and calcite was completely depressed at a dosage of more than 4 × 10−4 g/L. Therefore, the separation of calcite with fluorite and barite can be achieved by floating fluorite and barite with the addition of more than 4 × 10−4 g/L valonea extract.

According to the above results, these three minerals in the mixture could be separated by flotation, as described in the flowsheet (Figure 6): bulk floating fluorite and barite by depressing calcite and then floating the fluorite in the collected froth product by depressing the barite. The flotation results are summarized in Table 3.
As shown in Table 3, after bulk flotation of fluorite and barite with valonea extract to depress calcite, 93.83% of the calcite remained in the tailing. Obviously, the depressing effect to calcite by valonea extract in the bulk flotation was striking. The content of CaF2 and BaSO4 in the calcite product was 42.03% and 24.71%, respectively. This was attributed to the fact that fluorite and barite could also be depressed slightly by valonea extract (Figure 4), but they could be reduced by several stages of scavenging the flotation tailings. At the same time, the recovery of fluorite and barite could be further increased after the scavenged concentrate was recycled.
The obtained froth product was further processed to float fluorite while depressing barite, by adding sodium fluosilicate. The CaF2 grade of the fluorite product reached 94.71%. While the CaCO3 recovery to the fluorite product was 5.38% (i.e., to the froth), its recovery to the barite product was only 0.79% (i.e., to the tailings). In other words, most calcite minerals appearing in the froth after the bulk flotation were also re-floated to the froth. This finding can be explained by the fact that when the sodium fluosilicate concentration was 3 × 10−5 mol/L, approximately 90% of the calcite responded to flotation (Figure 5). The collected fluorite product will be able to meet the standard of acid-grade fluorite (CaF2 grade >97%) after several stages of cleaning with valonea extract to depress the calcite and sodium fluosilicate to depress the barite.
The BaSO4 grade of the barite product was 93.47%, and it can be used as a heavy loader for directly drilling. A higher quality barite product for the chemical industry can be obtained after a few stages of scavenging flotation.

The separation of calcite from fluorite and barite in a mixed mineral pulp can be achieved by floating fluorite and barite, with >4 × 10−4 g/L valonea extract to depress calcite flotation, leaving the calcite in the tailings. The separation of barite from fluorite (and calcite) can be realized by adding >3 × 10−5 mol/L sodium fluosilicate to depress the barite and to float fluorite. This developed flotation separation process exhibits a great potential for industrial application.
The valonea extract and sodium fluosilicate depress these minerals by preventing oleate species from reacting with Ca2+ or Ba2+ surface sites. Adsorption of tannin molecule in the valonea extract is the highest on the calcite surface, and sodium fluosilicate adsorption is the highest on the barite surface.

This work was financially supported by “the Fundamental Research Funds for the Central Universities (WUT: 2016IVA048)”. 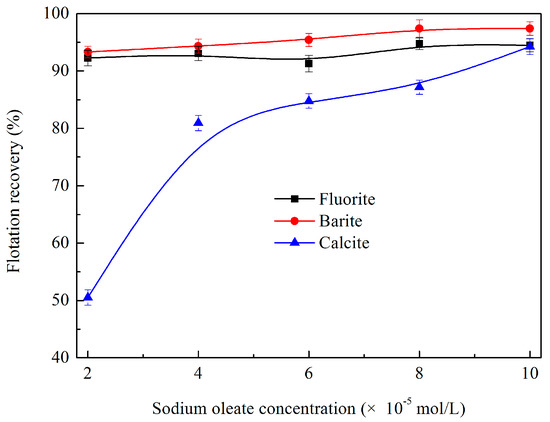 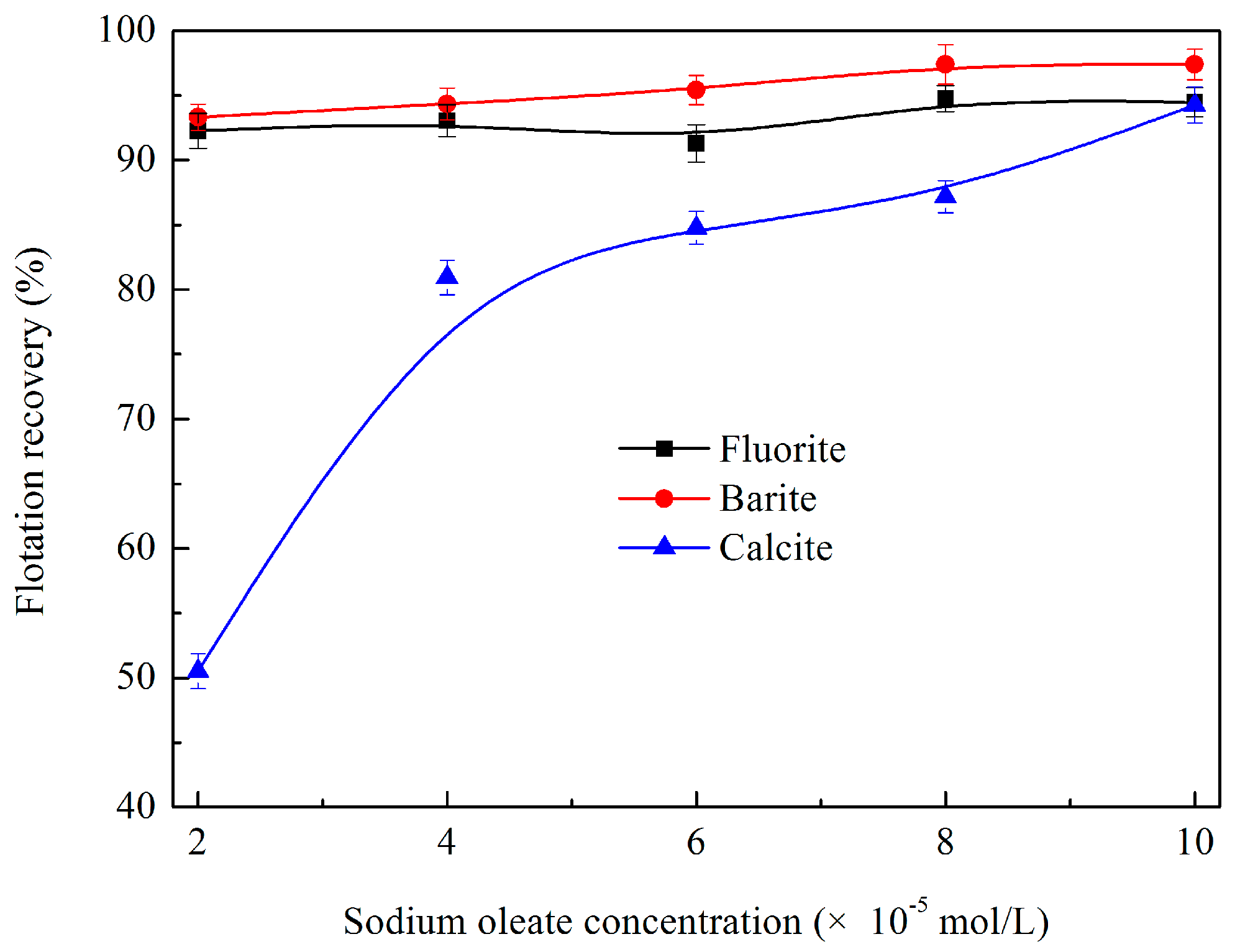 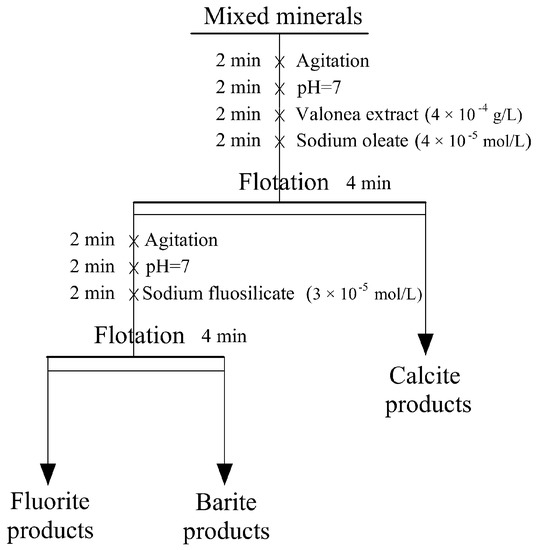 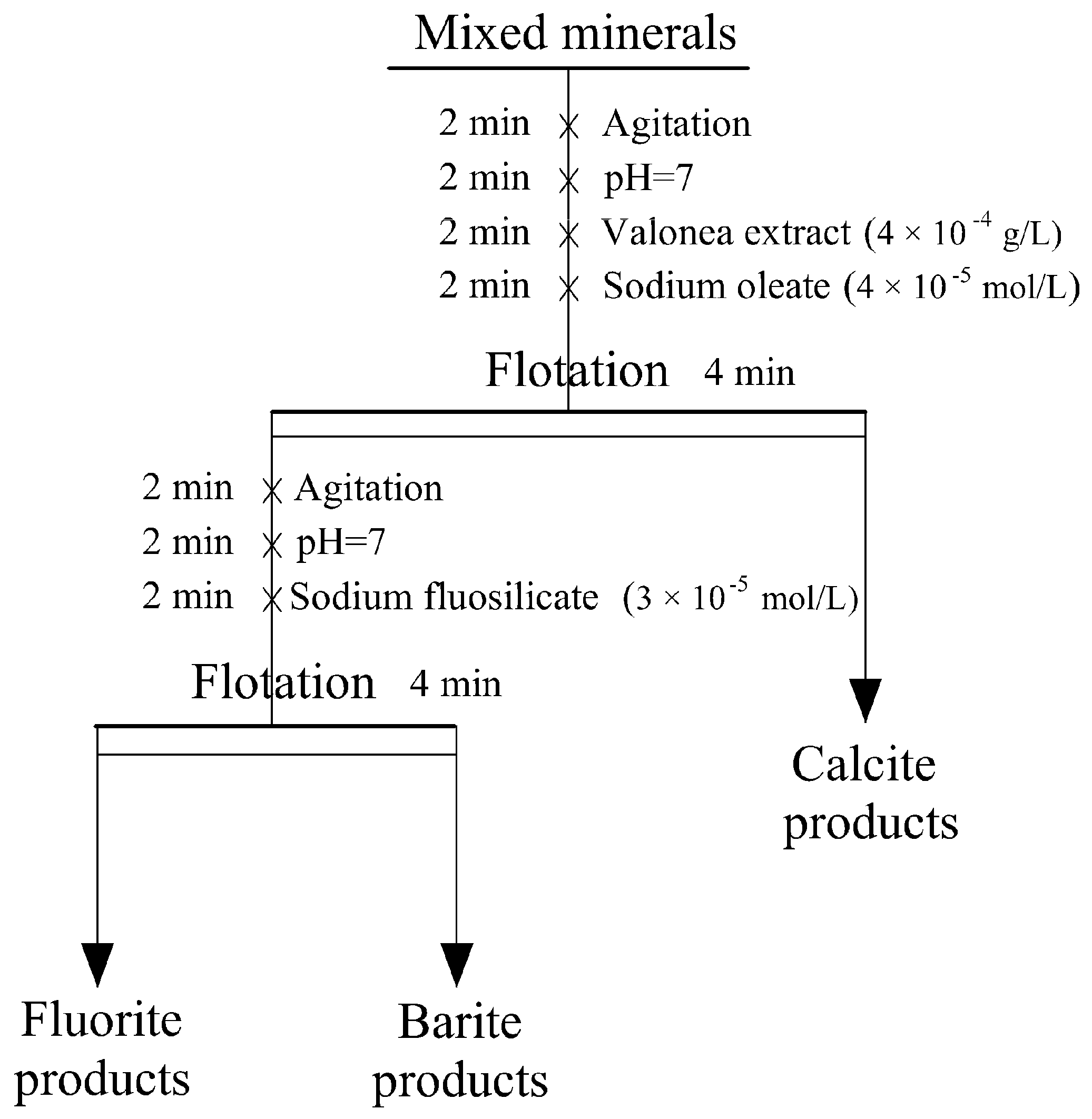 Table 1. Chemical composition of the pure fluorite, barite and calcite (%).
a Loss on ignition.