The earth’s core is thought to be composed of Fe-Ni alloy including substantially large amounts of light elements. Although oxygen, silicon, carbon, nitrogen, sulfur, and hydrogen have been proposed as candidates for the light elements, little is known about the amount and the species so far, primarily because of the difficulties in measurements of liquid properties under the outer core pressure and temperature condition. Here, we carry out massive ab initio computations of liquid Fe-Ni-light element alloys with various compositions under the whole outer core P, T condition in order to quantitatively evaluate their thermoelasticity. Calculated results indicate that Si and S have larger effects on the density of liquid iron than O and H, but the seismological reference values of the outer core can be reproduced simultaneously by any light elements except for C. In order to place further constraints on the outer core chemistry, other information, in particular melting phase relations of iron light elements alloys at the inner core-outer core boundary, are necessary. The optimized best-fit compositions demonstrate that the major element composition of the bulk earth is expected to be CI chondritic for the Si-rich core with the pyrolytic mantle or for the Si-poor core and the (Mg,Fe)SiO3-dominant mantle. But the H-rich core likely causes a distinct Fe depletion for the bulk Earth composition. View Full-Text
Keywords: ab initio molecular dynamics; high-pressure thermoelasticity; outer core chemistry ab initio molecular dynamics; high-pressure thermoelasticity; outer core chemistry
►▼ Show Figures 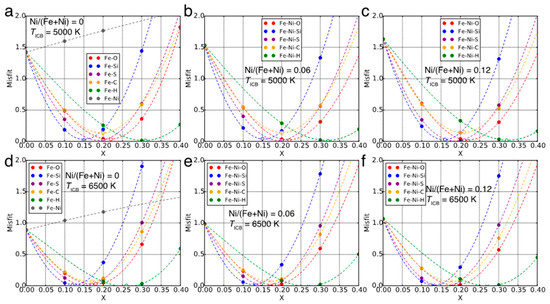