The Baiyinnuoer skarn Zn–Pb deposit, located in the Southern Great Xing’an Range, Northeast China, is the largest Zn–Pb deposit of the northern China, with a total reserve of 32.74 Mt at average grades of 5.44% Zn and 2.02% Pb. The Zn–Pb ore bodies are hosted in the Lower Permian Huanggangliang Formation. The results of zircon U–Pb geochronology show that the ore-associated granodiorite porphyry, granodiorite, and diorite were emplaced at 248 ± 1.3, 251 ± 1.8, and 249 ± 1.4 Ma, respectively. The granodiorites and granodiorite porphyry have low P2O5 (0.13–0.23 wt %) and A/CNK (0.79–1.05) values, and their SiO2 and P2O5 contents are negatively correlated, indicating I-type affinity. The positive εNd(t) values (+1.3 to +1.8) and young two-stage model ages (TDM2) (880–916 Ma) of the Baiyinnuoer intrusive rocks suggest that they might have formed by the mixing of both mantle and crustal materials. The variations in the major elements, Rb, Sr, and Ba, and the negative Nb–Ta–Ti anomalies indicate that fractional crystallization might have occurred during magma ascent. In combination with the regional geology, the new geochronological, geochemical, and isotopic data reveal that the ore-associated intrusive rocks at Baiyinnuoer were formed in a post-collision setting in the Late Permian. View Full-Text
Keywords: Late Permian; I-type granitoid; skarn Zn–Pb deposit; Baiyinnuoer; Great Xing’an Range Late Permian; I-type granitoid; skarn Zn–Pb deposit; Baiyinnuoer; Great Xing’an Range
►▼ Show Figures 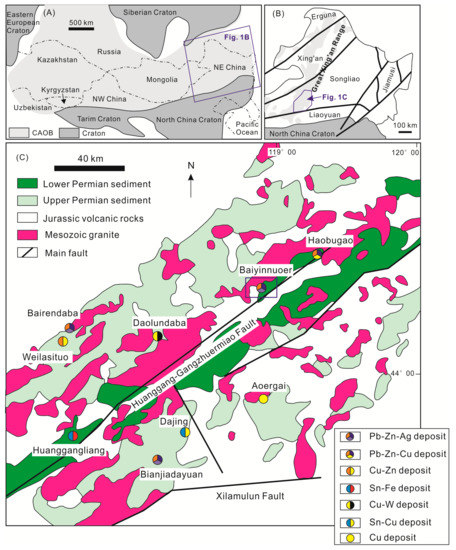