Sleep and Heat Related Changes in the Cognitive Performance of Underground Miners: A Possible Health and Safety Concern

The characterization, evaluation and remediation of polluted soils is one of the present environmental challenges to be addressed in the coming years. The origin of trace elements in soils can be either geogenic or anthropogenic, but only the latter is interesting from a legal point of view. The hazard of the pollutants in the soils not only depends on their total concentration, but particularly on their availability. The mobility of the trace elements depends on their speciation, and it is also affected by several soil parameters. Mining activity is one of the most important anthropogenic causes of soil pollution. As a case study, this work is focused in the Riotinto mining area (Iberian Pyrite Belt, IPB, SW Spain). The IPB is one of the most important metallogenic provinces in the world and it has been exploited for thousands of years. The disposal of mining residues has produced important sources of contamination by trace elements and acidic waters affecting soils and rivers. In addition to these problems, the closure of mines in the Pyrite Belt at the end of the 20th Century has led to a great loss of employment, which has caused the development of an intensive agriculture of citrus fruits as a new source of income. The intensive growing of citrus fruits and the traditional subsistence agriculture have been developed surrounding the mining areas and on floodplains near to mining sites. The level of soil pollution has not been taken into account in these cases, nor has its impact on the health of the inhabitants of these areas. Therefore, it is of great interest to study the current state of the cultivated soils and the sources and types of contaminants derived from mining activity in order to program its decontamination, where appropriate, according to legislation. In order to know the present and future hazard posed by the soils chemical and mineralogical speciation has been carried out, given that the availability of a metal depends on the phase in which it is found. The results showed that mining activity has caused high levels of As, Cu, Pb and Zn in several cultivated soils. Moreover, Cu, Pb and Zn showed a high bioavailability. This suggests that at least other studies are necessary to preserve health in the inhabitants of this area. The methodology carried out in this work allowed to select potentially polluted areas where agricultural activities are not recommended. View Full-Text
Keywords: soil contamination; trace elements; sulfide mining; Iberian Pyrite Belt soil contamination; trace elements; sulfide mining; Iberian Pyrite Belt
►▼ Show Figures 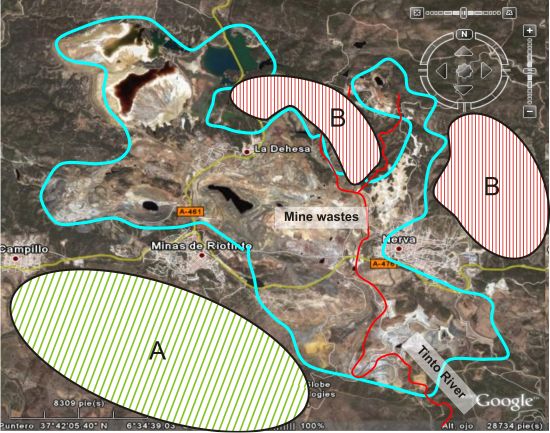