Horse Welfare and Natural Values on Semi-Natural and Extensive Pastures in Finland: Synergies and Trade-Offs
Previous Article in Special Issue

Investigating the Diversity and Variability of Eastern Mediterranean Landscapes

The aim of the paper is to examine the variability of eastern Mediterranean landscapes using a common mapping framework relying on Landscape Character Mapping (LCM). LCM was adapted to the region’s specificities placing emphasis on the area’s coastal nature, landform variation, land use, in particular pastoral tradition, and settlement patterns, an important output of this study. We selected six study areas, in four countries namely Cyprus, Greece, Jordan and Lebanon, based on their rich cultural and natural heritage, covering a NW to SE gradient of both environmental and cultural settings. We used commonly employed landscape metrics to quantify landscape diversity in the study areas. Similarity in landscape types among study area was measured using Sørensen similarity index. The Kruskall–Walis test was used to test the variability among countries in terms of landscape character variation due to physical and cultural factors. Linear regression was used to assess whether landscape diversity increases with area size. The work has identified and mapped a total of 69 landscape types, of which 18 are rare. Rare landscape types were related to specific geomorphology or intensive anthropogenic activities, which do not occur elsewhere in the East Mediterranean region. The highest similarity was recorded between islands and between mountainous areas. The larger the area the higher is its landscape diversity. This works fills a gap in Mediterranean and sets a benchmark standard for landscape characterization work in the East Mediterranean, so as to enable much greater consistency between countries in future landscape mapping exercises and, ultimately, facilitate trans-boundary cooperation in landscape-scale nature and culture conservation. View Full-Text
Keywords: classification; GIS; LCA; Land Description Units; mapping; planning; typology classification; GIS; LCA; Land Description Units; mapping; planning; typology
►▼ Show Figures 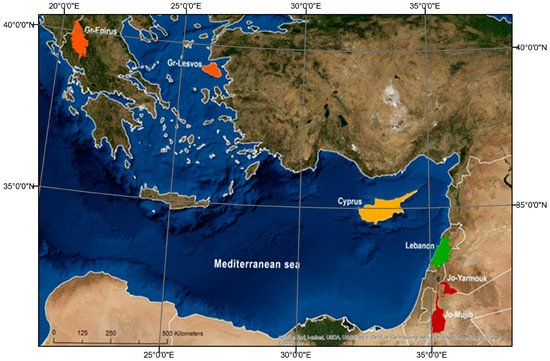