The Californian Floristic Province, ranging from Northern California, USA, to the northwestern portion of the state of Baja California, Mexico, is a region of great biological richness that has a high risk of loss of species due to the effect of human activities. The main stressor that threatens its biodiversity is the change in land use and vegetation cover, which severely impacts the environmental and socio-economic systems’ functioning, affecting the provision of environmental services including the maintenance of biodiversity. The Tijuana River Watershed (TRW) is located within this floristic province. It has experienced rapid population growth during the last 50 years, demanding development of infrastructure in areas where native vegetation existed. As a binational watershed, it is an ideal area to study the processes involved in fragmentation and connectivity of natural environments, since both countries, while sharing the same environment, contrast greatly in their economic and social systems, which impose different pressures to these shared natural resources. Our research addresses change in vegetation cover and land use in the TRW, analyzing the changes and differences between Mexico and the United States. This analysis will be a basis to propose future management strategies for the conservation of ecological processes and biodiversity, according to the policies and actions for land management and conservation in both countries. View Full-Text
Keywords: land use and vegetation cover; Tijuana River Watershed; California floristic province; Tijuana; San Diego; binational land use and vegetation cover; Tijuana River Watershed; California floristic province; Tijuana; San Diego; binational
►▼ Show Figures 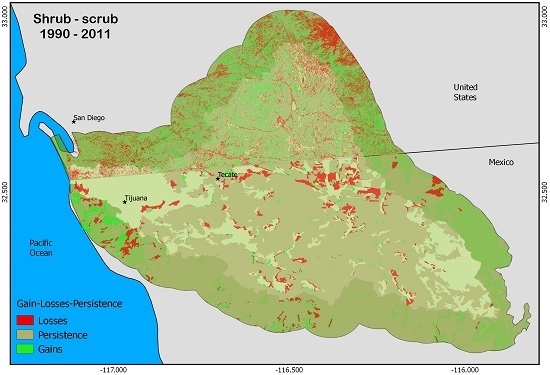