Dependencies between Demographic Urbanization and the Agglomeration Road Traffic Volumes: Evidence from Poland

A method is proposed for forecasting traffic intensity at the border of an agglomeration’s core, using demographic data such as amount (number) and structure of population and housing in the surrounding (suburban) area. Relationships between groups of variables are analyzed by calibrating traffic and demographic models for a selected agglomeration in Poland. The choice of Poland is justified by an intensive suburbanization process that took place during the transition from a centrally controlled market to a free market economy after 1989, such research being quite novel and original for this country. Three assumptions concerning this research methodology (concerning how to specify the research area and parameters characterizing traffic and population) were formulated and tested. Models (dependencies) acquired this way were tested in another Polish agglomeration of similar size, yielding similar results. Very high correlations between characteristic groups of variables were indicated. The best correlation occurred between an intensity of cars leaving the center of an agglomeration in the afternoon rush hour (as a traffic group variable), with the total population, the number of economically active people, and the number of dwellings in the surrounding areas (being population group variables). A novel way of specifying the range of the surrounding areas influencing the main city traffic was proposed. The results obtained and the models constructed should be applicable for other agglomerations, since the universality of the observed phenomena and their relationships are expected. View Full-Text
Keywords: agglomeration; suburbanization; urban sprawl; spatial chaos; road traffic volumes; traffic growth factors agglomeration; suburbanization; urban sprawl; spatial chaos; road traffic volumes; traffic growth factors
►▼ Show Figures 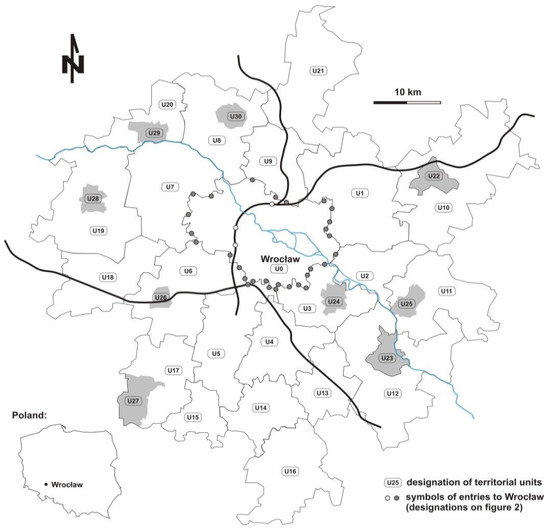