Essentials of Endorheic Basins and Lakes: A Review in the Context of Current and Future Water Resource Management and Mitigation Activities in Central Asia

The total amount of annual precipitation of South Korea ranges from 1200 mm to 1500 mm in the central region to 1000 mm to 1800 mm in the southern region. The seasonality of precipitation in South Korea is very strong. Due to seasonality, an inter-annual variability of precipitation events is very large. For example, more than 70% of the total amount of annual precipitation occursduring the rainy season (from May to October). Several generating mechanisms of rainfall events in the rainy season mainly affect extreme rainfall events in South Korea. For instance, the local convective storm events, and typhoon are the main generating mechanisms of extreme rainfall in South Korea. The local convective storm events are mainly caused by the effect of monsoon in South Korea where one of the East Asian summer monsoon (EASM) regions [31,32]. One of the great features of the EASM is heavy rainfall in the early rainy season lasting around 3–4 weeks due to seasonal changes in atmospheric circulation [33,34]. Typhoons mostly affect precipitation in the late rainy season in South Korea and provide around 25% of seasonal precipitation from 1966 to 2007 [32,35]. On average, three typhoons per a year affect rainfall events and often bring a great damage to South Korea [36].
In the current study, an annual maximum (AM) rainfall series of eleven rainfall durations (1 h, 2 h, 3 h, 4 h, 6 h, 12 h, 18 h, 24 h, 48h, 72 h, and 168 h) at 64 weather stations are employed. The area for one rainfall observation station is about 1566 km2. The stations that have more than a 30-year record are selected for analysis. The hourly precipitation data used in the current study are collected from Korea Meteorological Administration (KMA) data base. The location of the weather stations is illustrated in Figure 1, and Table 1 presents their information such as station name, record length, and elevation.
For strict comparative analysis, the temporal series should be done during the same period. To obtain more stable and reliable results of the analysis, all available data for each station are employed in the analyses. For the data employed in this study, the start year of the data is little different for each weather station. However, the end year of data is the same for all employed station (end year of data is 2016). The results of analyses can be employed in comparative analysis in this study.
To examine the statistical characteristics of the AM series of South Korea, basic statistics that have been calculated using the AM series for all of the stations are presented in Figure 2. These basic statistics include the mean, the standard deviation, the coefficient of variation (CV), the coefficient of skewness (CS), and the coefficient of kurtosis (CK). The median of the mean estimates increases as the duration becomes longer. This tendency is also observed in the variance of the mean estimates. It is observed in Figure 2c that the median of the CV estimates changes with the duration. The median of the CV estimates increases through 72 h (excluding 168 h) as the duration becomes longer. However, the differences in the median of the CV estimates are small. The variance of the CV estimates varies strongly with the duration. The median and variance of the estimates of the CS and the CK are almost consistent with the durations. The AM series of South Korea display consistent estimates of the CS and the CK for different durations. Since the CS and CK represent the behavior of the right tail of the probability distribution that governs the characteristics of extreme events, the extreme rainfall events of South Korea may have similar distributional characteristics. However, the statistical characteristics of the AM series corresponding to the different durations may differ, due to the discrepancies in the estimates of the mean and the CV.

The MK test is the one of most popular trend tests because it is simple and non-parametric. The results of the MK trend test are affected by serial correlation in the time series. When positive serial correlation exists within a time series, the possibility that the null hypothesis (i.e., that no trend exists) will be rejected when the null hypothesis is actually true increases [37,38]. Completely independent data sets are difficult to find, due to the presence of external factors that impact the generation of the target data. To overcome these drawbacks, a large number of studies have suggested various modified versions of the MK test for use in the field of hydro-meteorology [39,40,41,42]. The block bootstrap-based MK (BBS-MK) test, which is a modified version of the MK test, was suggested by Khaliq et al. [43]. The performance of the BBS-MK test is comparable to other modified versions of the MK test, and it is simpler and more efficient than these other methods [42].
The procedure used in applying the BBS-MK test is as follows:

In this study, 2000 simulated sample sets are resampled from the original data set. Svensson et al. [44] reported that this number leads to stable estimates of the significance in trend tests using simulation methods. Additionally, the optimum value of g is estimated by trial and error. To find the optimum g value, mean and autocorrelation of the observation and the resampled data are computed. The relative absolute error between the observation and resampled data for g from one to one-quarter of sample size computed based on the mean and autocorrelation estimates. The g value giving the smallest relative error is employed as the optimum g value. A detailed method for finding optimum values of g is described in Khaliq et al. [43] and Önöz and Bayazit [42].

Detecting appropriately the trend in the data having serial correlation and small sample size is difficult. To obtain reliable results of trend detection, modified version of Mann-Kendall (modified MK) test adapted by Yue and Wang [45] is employed in the current study. In the modified MK test, the autocorrelation in the data series is taken into account by modifying the variance of the test statics (S). The procedure of the modified MK test is described as below.
Mann [46] and Kendall [47] state that when n is larger than eight the statistic S is approximately normally distributed with the variance given by: where is the number of ties of extent l. The standard MK statistic Z is computed by Equation (3)
The standard MK statistic Z follows the standard normal distribution under the null hypothesis of no trend. In the modified MK test, the variance of the test statistics V(S) is corrected by multiplying the correction factor (CF) for taking into consideration serial correlation in the data. Equation (4) presents the corrected variance of test statistics. where is the lag-i serial correlation coefficient from the detrended data or rank of the detrended data. In the current study, the trend in the original data are removed by the Theil-Sen approach as recommend by Hamed and Rao [39] and Blain [48]. The Equations (5) were given by Matalas and Langbein [49] and Bayley and Hammersley [50]. The standard Mk statistic in the modified MK test is defined by Equation (6).

5.2. Trends in Temporal Structure of the Time Series of Annual Maximum Rainfall

6.1. Characteristics of Spatial and Temporal Structure of Extreme Rainfall Trends in South Korea

6.2. Limitation of the Employed Methodology

This work is supported by the Korea Agency for Infrastructure Technology Advancement (KAIA) grant funded by the Ministry of Land, Infrastructure and Transport (Grant 17AWMP-B083066-04). 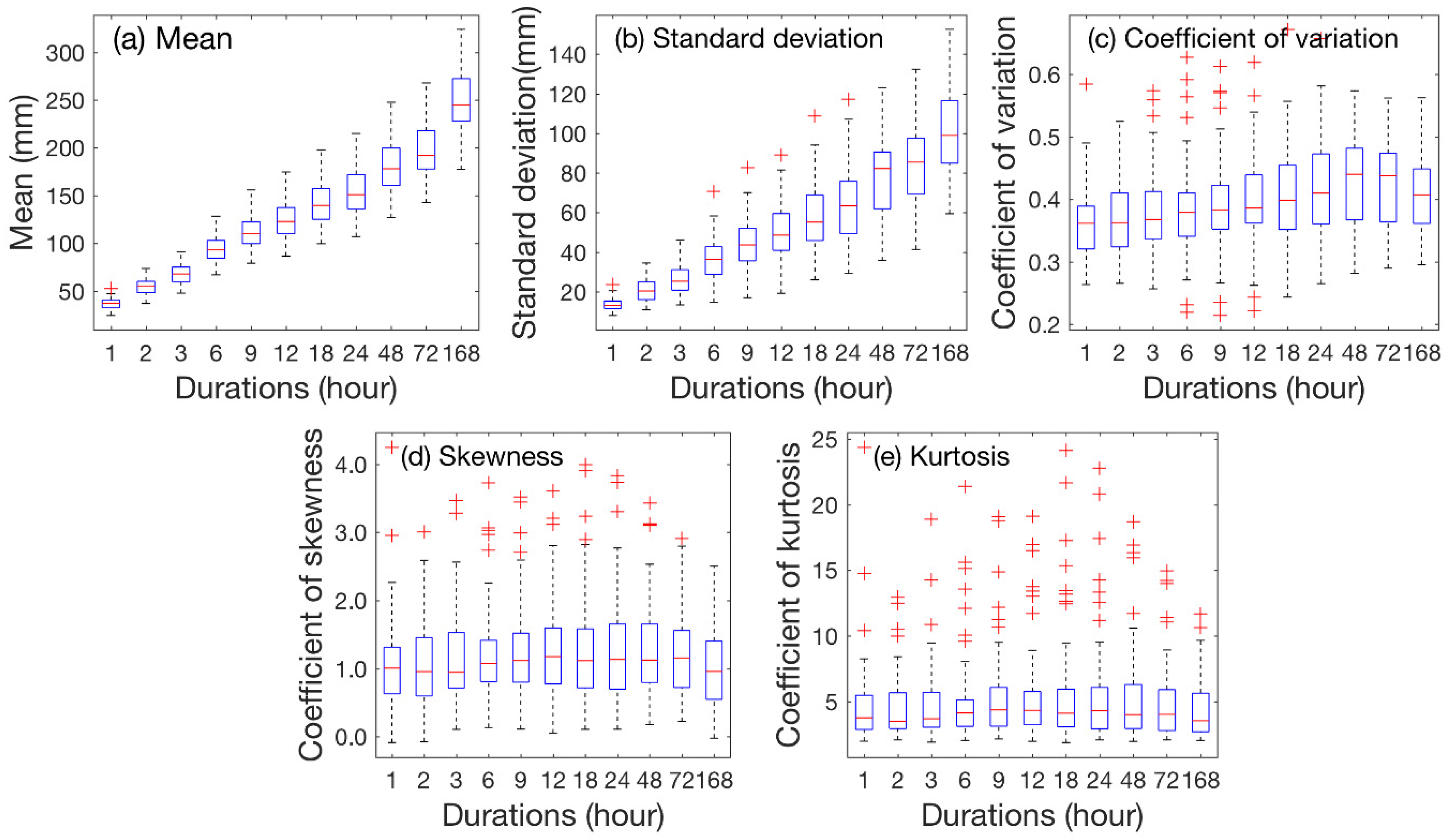 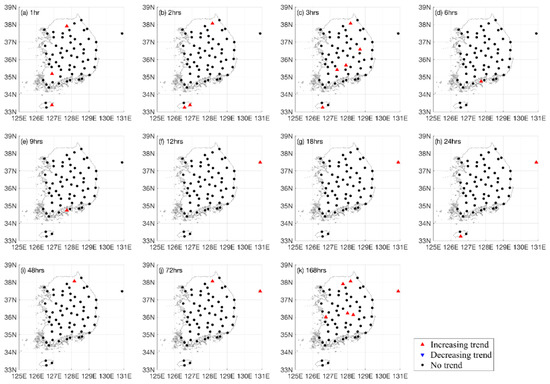 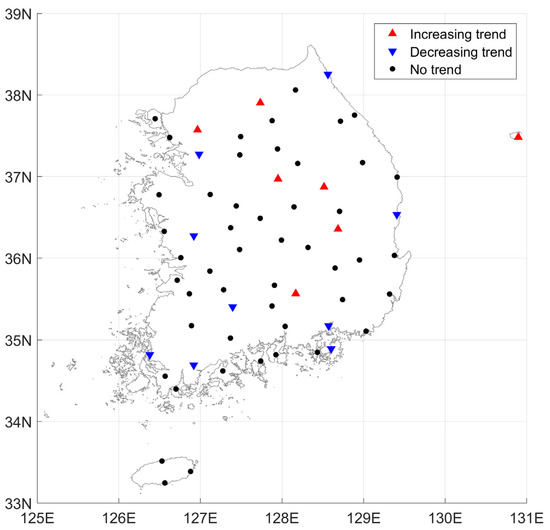 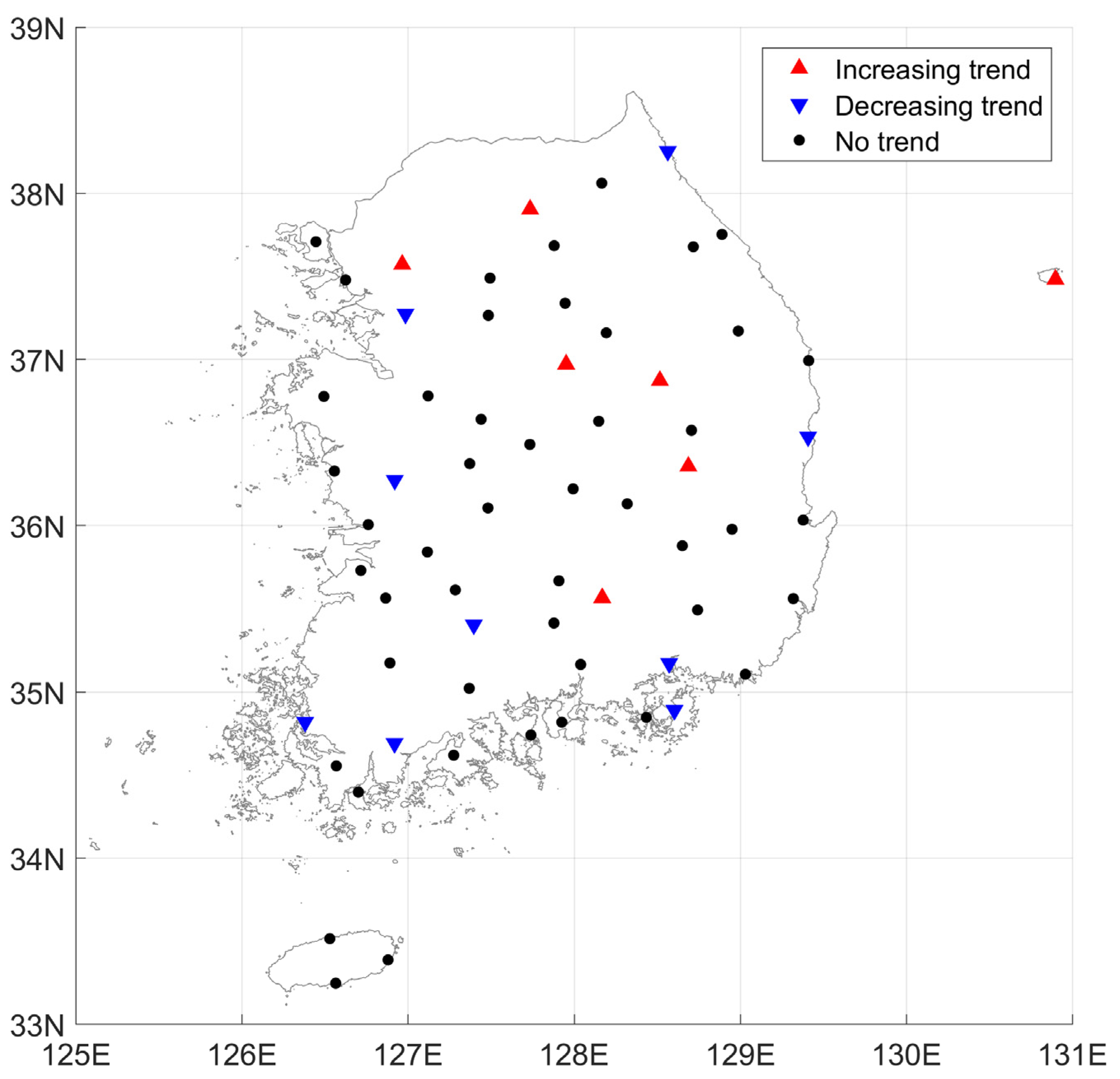