Climate change is advancing globally [1], and its impacts are growing on our planet. Some are already underway and others will occur in the near future. In Europe, land and sea temperatures are increasing; precipitation patterns are changing, generally making wet regions wetter, particularly in the winter, and dry regions drier, particularly in the summer; sea ice coverage, glacier volume and snow cover are decreasing and sea levels are rising; and climate-related extremes such as heat waves, heavy precipitation and droughts are increasing in frequency and intensity in many regions [2].
Increasing pressure on water distribution, in terms of growing demand and decreasing availability due to climate change, require the adoption of appropriate optimization strategies in order to develop correct and efficient management of available resources. Over the last decades, optimization methods have been widely applied in water resources problems and many optimization models have been developed. These state-of-the-art models have been reviewed by several authors [3,4,5,6,7]. Optimization of water systems follows different approaches, changing with the scale on which the system is analyzed, and various types of optimization techniques have been proposed.
In the context of climate change, due to the variability of rainfall and the scarcity of water, the conflicts between different uses, as well as the current structural and management problems must be overcome.
With regards to proper management strategy, the use of new sources of water supply seems to be a challenge, while the use of unconventional water resources, such as the reuse of waste water, is receiving more attention [8,9,10,11,12,13].
Optimization models and mixed simulation—optimization models have also been widely used for drinking water distribution systems. Specifically, drinking water distribution systems analysis and planning has been studied using linear programming (LP), nonlinear programming (NLP) and integer linear programming (ILP), together with the most recent probabilistic heuristic algorithms. Many of these models have been developed for solving least-cost design problems, with additional consideration of other aspects such as reliability and operational efficiency [14,15,16,17,18,19]. The pursuit of the optimal management of these systems also requires the improvement of water systems by reducing structural and management deficiencies, the risk analysis associated with the vulnerability of drinking water systems [20] and the proper allocation of available water resources [21].
Proper allocation of water resources is an important optimization problem and many studies have been conducted on this issue. In the last decades, problems related to the correct allocation of water resources have been assuming a growing interest in relation to hydrological regime changes and growing demand in different sectors. In this context, optimal distribution of available resources includes the ability to respond to the needs of different users and to promote equilibrium between economic, social and environmental aspects. Previously, several studies have been developed in this field with different approaches and conceptual models. Yamout and El-Fadel [22] proposed and applied a multi-sectoral model for water resource allocations and management. Zhanping and Juncan [23] proposed an optimization model for the optimal planning of complex water systems with multiple supply sources and multiple users, taking into account environmental considerations. Sun and Zeng [24] adopted the optimization theory of the dynamic programming principle to build the Weinan city water resources optimization allocation model. Bai, Liu and Wang [25] developed an optimal model for water allocation and water distribution network management where objectives include cost and water conservation. Ni, Liu, Ren and Yang [26] investigated the optimal allocation of water resources for an urban water management system through a model based on multi-agent modeling technology.
In this context, the sustainable management of drinking water resource systems requires the establishment of local districts of a proper size where the service can be provided with adequate levels of efficiency. The best delimitation of such districts must take into account three different types of objectives: (1) political and administrative—making use of regional, provincial or municipal boundaries; (2) technical—identifying management areas comprising a homogeneous storage and distribution system; and (3) socio-economic—identifying the area where the lowest rate of application is sustainable. It should be noted that these goals are not always compatible and it is often necessary to prioritize some of them over others. The easiest and most frequent choice prioritizes the optimization of homogeneous infrastructure systems within defined administrative boundaries. In this context, the concept of sustainable water management requires the optimization of resource allocation in order to meet the demand even in a scenario of reduced water availability due to climate change. The goal of achieving the lowest water usage rate is of interest not only in relation to operating costs and economic management optimization, but also in relation to financial optimization of investment plans. In fact, the optimization of new pipelines has a positive impact on water tariffs. An immediate prediction of infrastructure developments is informed by parametric evaluations of the amount of work to be carried out, such as kilometers of networks. With the aim of proper management of investment plans, there is a need for fast and accurate methodological forecasting tools for drinking water systems optimization which are capable of accounting for possible future scenarios of reduction in water availability due to the effects of, for example, climate change or evolution of demand.
According to this approach, this paper identifies and compares water resource optimization solutions achieved in the province of Crotone (Calabria region, Southern Italy) through the redefinition of the distribution system, taking into account both current water availability and possible future reduction in water availability due to the scenarios projected by climate change analyses.

The case study was conducted in the area corresponding to the province of Crotone (1717 km2) in southern Italy. In this area, 29 springs, 3 intakes and 7 wells are available, for a total drinking water availability of 1534.8 L/s (Table 1). As shown in Table 2, total water demand by municipalities is 922.8 L/s [35].
Drinking water distribution is carried out within the province of Crotone through six regional water supply systems together with some small municipal systems (Figure 1). The comparison between the water resources distributed by these supply systems and the water needs shows that, although availability exceeds demand, water distribution is not balanced and that, especially in summer, several municipalities are affected by water shortage.
In this case, the availability exceeds the demand, therefore it is necessary to formulate the problem by introducing a dummy destination. The optimization problem is characterized by source nodes, destination nodes and decision variables Qij have to be determined in order to minimize the cost (Equation (3)).
With regards to the K and α parameters of Equation (3), on the basis of the characteristics of the existing pipelines in the case study area, the value α is posed as equal to 1, while the parameter K can be left in parametric form because it does not influence the minimum cost configuration.
Figure 2 is a graphic representation of the links between the source nodes and the destination nodes of the current schema of the drinking water systems.

Research on the correct allocation of water resources is becoming increasingly important due to the reduction of water availability and the increasing competition between different users. This paper presented two optimization solutions with regards to the problem of available resources allocation. In particular, for the case study of the province of Crotone, the optimization solution for current water availability was compared to the optimization solution for the expected reduced availability of water resources due to climate change. The province of Crotone is a territory with an agricultural and tourist vocation and is characterized by a sufficient availability of drinking water, but by an unbalanced distribution. The sensitivity of the territory to climate change will likely worsen this situation. It was shown that, even considering an intermediate climate change scenario (RCP4.5), reduction in precipitation is significant, and it is amplified in the hydrological outflow.
The comparison between the optimization solutions achieved with the climate change scenario and the control period showed:
The proposed methodology responds to the need for predicting optimized network developments by providing its total length and the length of new connections required, allowing the evaluation of the financial impact within an investment plan. This flexible approach, which in future research developments will also be applied to more complex cases where water availability is not assured in future scenarios, is of interest to water service providers and, in general, to stakeholders committed to achieving the most sustainable water tariff.
The results achieved highlight the importance of and the need for assessing the effects of climate change in water resource planning in order to provide a more adequate planning strategy able to guarantee a better distribution of resources and fulfillment of demand.

No financial supporting has been received for the research described in this paper.

All the authors conceived and designed the experiments. G. Mendicino and A. Senatore performed the hydrological analysis for both the current period and the future scenario. A. Maiolo and D. Pantusa performed the optimization analysis. D. Pantusa wrote the paper, supported by A. Senatore concerning the description of the hydrological analysis and supervised by M. Maiolo and G. Mendicino. 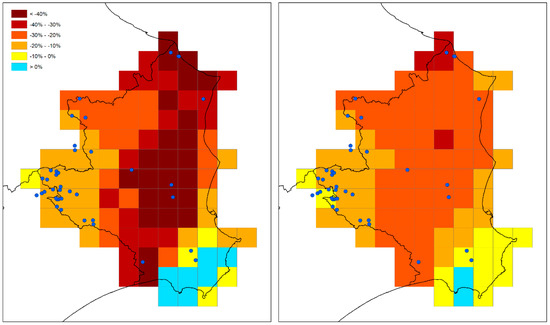 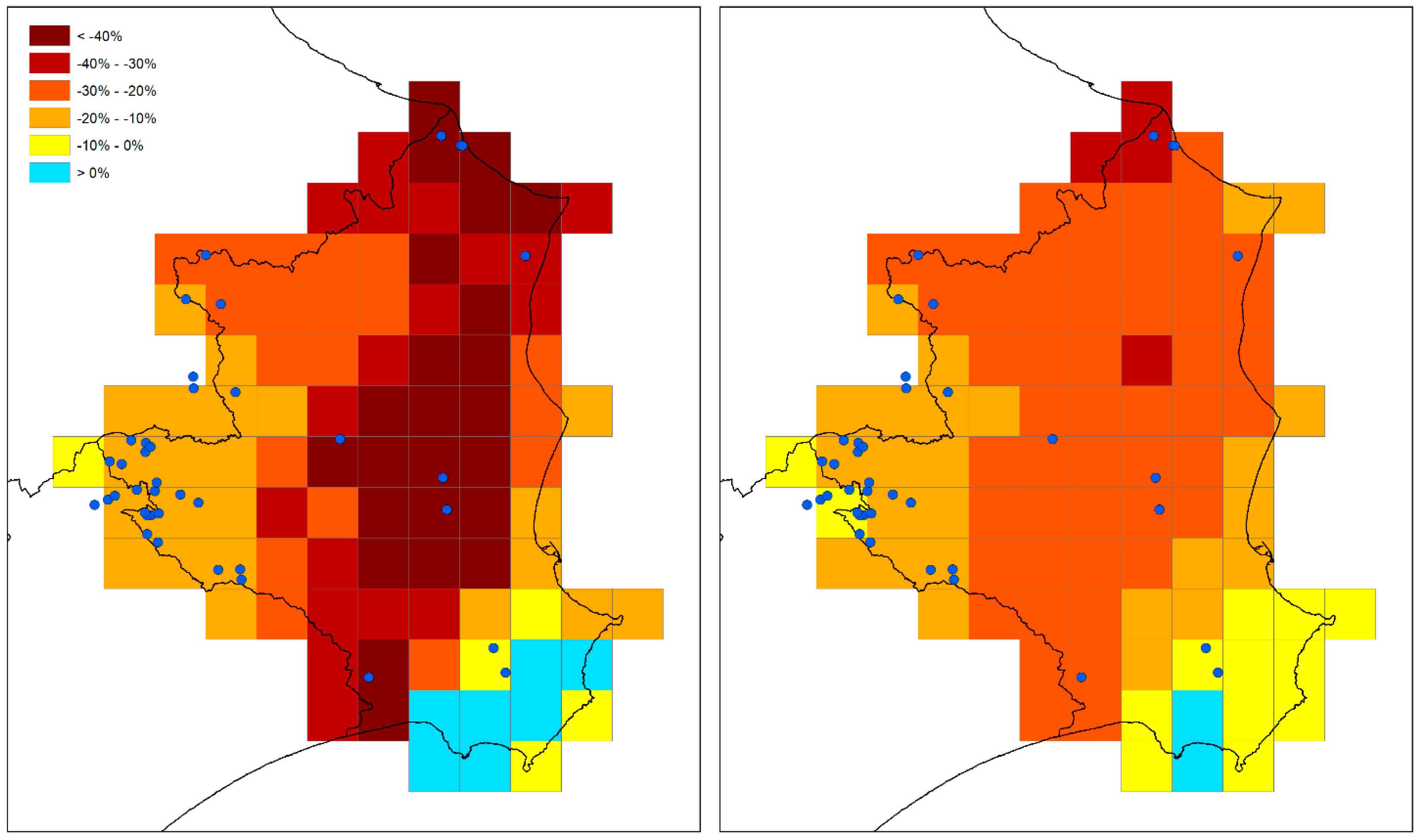